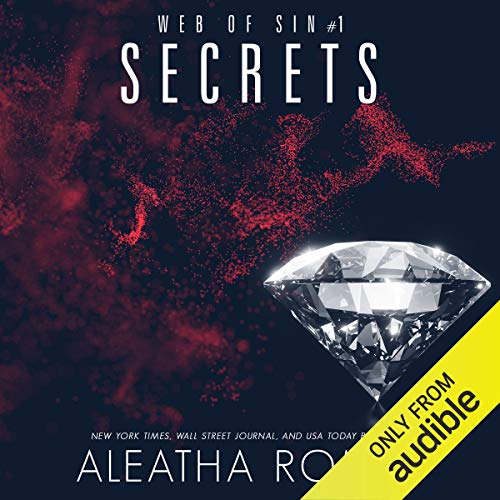 I’m Sterling Sparrow. You’ve no doubt heard my name or read it on the top of tall buildings. There’s more to my business - my realm - than what is seen above ground.

Within the underbelly of one of America’s largest cities lives a world where a man’s word is either his most valuable tool or his most respected weapon. When my father ruled that world and that city, he promised me someone who would one day make my reign complete. Since that day long ago, Araneae McCrie has been mine. She just didn’t know.

My father is now gone. The city and the underbelly are now mine. The time has come for me to collect who was promised to me, to shred her life of secrets and make her who she’s always been - mine.

Disclaimer: I don’t read dark romance and I don’t enjoy it at all, but I’d do for Aleatha because she’s a genius and everything she writes is golden… Hence, the 4 stars… Otherwise, I’d have rated it with 5 stars.
Oh. My. God. How I was so out of my comfort zone with this book, but I had the audiobook to help me continue reading despite the darkness in it! In Secrets, the first book of the Web of Sin Trilogy, Kennedy knew her real name when she was a teenager, but for years that name didn’t mean anything to her. Until one day it became everything, but it carried so many questions that only Sterling could answer, but he wouldn’t answer them all at once… He’d take his time and in the meantime, he’d claim what’s his: Araneae, AKA Kennedy.

What else can I say aside from…. *shock face*

Aleatha knows how to make me never want to stop reading—or listening to—her books with all the suspense and intrigue and mystery she adds to them… And with the addition of the erotism… WOW!!! The story, the characters, and the background were greatly built and with the revelation by the end, Aleatha made sure to have me waiting eagerly for the next book, Lies.

Savannah Peachwood & Alexander Cendese did a great job with the narration of Secrets. Both their performances matched the story and personality of Araneae/Kennedy and Sterling. The sex scenes were PERFECT!!! WOW!!! Really, really greatly read!!

And now… the wait… being…

Is it December 4th already?

MsRomig is amazing storyteller and this new book just confirms it. She throws us in the middle of the situation and while it unfolds the new pieces come into play. Love the love/hate feeling the Kennedy and Sterling. The cliffhanger is explosive and wait till part 2 is agonizing. Thanks for wonderful read

I love all of Aleatha Romigs books and I have found she always has excellent narrators as well. This story starts out with a bang and draws you in! I really enjoyed getting to know the characters, they’re all likable, especially Sterling :)
Recommend for anyone who likes some mystery with their dark romance!! I can’t wait for the next book!

I’m reading this book right now, but I cannot take the female narration, its horrible. Im half way on this book but unfortunately cannot take her narration anymore.
Will try to get in on the kindle version.

There was a lot of drudgery. The story isn’t deep enough for the amount of inner dialogue in the book. When the main characters finally came together it was with very little fanfare. (ie we had a 1 min romp now we sleep together and have hours long foreplay). Um k. No heat, passion. Little chemistry. I’ve had a hard time getting through this author’s books but I keep trying bc of the reviews. Giving up

I could not listen to the book due to female narrator. Beyond bad with drama and extremely irritating over acting and inflection.

I'm not really sure how I felt about this book, I don't understand why anyone would think people want to read this. At first I wanted to shut it off because who wants to read this kind of story. It was frustrating that someone who was kidnapped, and was told her friends would be killed if she didn't go, was still attracted to the abductor. The man was so back and forth on how he treated her. It was hard to get through, but it held my interest. I found myself wanting to know why everyone was after the female lead, and not so much how the "love" story played out. With that said, some parts did make me sick. Is it something I care to listen to again? Not a chance. Do I regret listening to this book? Yes, it was too much for me... And I can tolerate quite a bit. This is really only good if you have a kidnapping fantasy, otherwise steer clear of this one.

-It was well written, the detail was phenomenal. I give that 5 stars.
-the female narrator was amazing 5 stars.
-male narrator 1 star. His voice was like nails on a chalkboard, it made me uncomfortable. It sounded nothing like the book painted him to sound like. It was just off.
-story -3 stars.

Great start to an intriguing story

This was a really great start to a very intriguing story. The storyline kept me interested and when I had to stop, I looked forward to being able to pick it up again. I was as frustrated at the lack of answers as the heroine was, but I'm looking forward to seeing what comes next. That cliffy was definitely unexpected, and I'm happy I have the next book available so I don't have to wait.

The performance was pretty good. I didn't mind the female voice - she did a great job of making everything understandable even when there were multiple characters in a scene. The male voice, however, was hard to like. He definitely had a gangster-style accent, which worked okay for the Hero even if it was a bit shocking when I first heard it. What I didn't like was that he sped through everything. When there were multiple men talking in a scene it was nearly impossible for me to keep track of who was speaking, because every single male character sounded alike. I'm not sure if there were no dialogue tags in these scenes or if I was just missing them, but I had to stop rewinding it after 5 or six tries to understand who was speaking and just move on.

OMG!😯 This story is INCREDIBLE!

This is my first time listening to Aleatha Roming's audiobooks. You feel every emotions the characters do. Can't wait to listen to part 2!🤗👏🏻👏🏻👏🏻