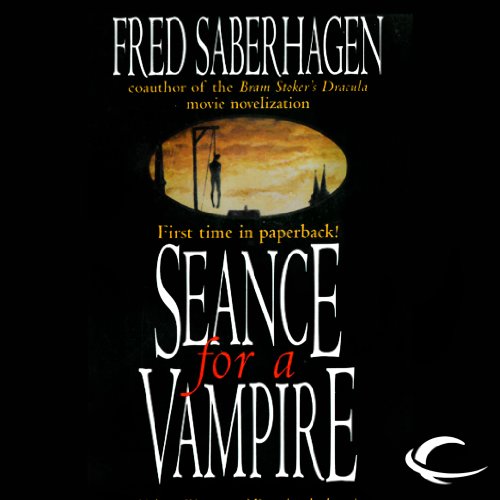 Seance for a Vampire

Seance for a Vampire

Bram Stoker portrayed Dracula as a terrifying creature of the night: heartless, soulless, preying on the pure and innocent. Fred Saberhagen, bestselling coauthor of the official movie tie-in for Bram Stoker's Dracula, shows another side to Dracula as the vampire is summoned by Dr. Watson to rescue Sherlock Holmes.

I'm addicted to this book series.

If you could sum up Seance for a Vampire in three words, what would they be?

What was one of the most memorable moments of Seance for a Vampire?

I think the part where Dracula was under an enthrallment and nearly got killed as a result was probably one of the more interesting moments. On second thought I think my favorite part (as I write this) is when Watson summons Dracula out of desperation and Dracula shows up just in time to take the place of the driver of the carriage that abducts Watson shortly after the summoning spell.

Have you listened to any of Robin Bloodworth’s other performances before? How does this one compare?

I have been listening to this entire book series read by Robin Bloodworth. I love them. My only regret is knowing that Fred Saberhagen (the author) passed away in 2007 so after A Coldness in The Blood there won't be any more of these Dracula books. By the way, why is A Coldness in the blood listed for pre-order but not as book 10 of The New Dracula when that is clearly what it is?

I could never pull off listening to any of Fred Saberhagen audio book in just one sitting. My behind would be numb and that long a span of time sitting still is bad for circulation. I listen to it on my computer.


I love this book series. I'm completely addicted to it. This is a very under-rated book series. It's sad that things like Twilight are popular but truly good vampire book series like this one fall into obscurity. I was growing sick of modern vampires when I discovered the Fred Saberhagen Dracula books in 2011. I wish I had discovered them while the author was still alive. I love these more than Anne Rice's The Vampire Chronicles (which I had been addicted to as a teenager).

Why is A Coldness in the blood listed for pre-order but not as book 10 of The New Dracula when that is clearly what it is?

Homles and Dracula, together again

This time it is Dracula who must rescue his nephew (though in this book Holmes is referred to as his cousin, even though in the preceding book Dracula identified him as a nephew of sorts).

Told much of the time from Watson's perspective, I thoroughly enjoyed his character. Forced to acknowledge the existence of vampires in the Holmes-Dracula file, he nonetheless is reticent to summon the Prince when Holmes is abducted, even though he knows it is the best course of action. Even so, the two men form an uneasy alliance in order to discover what has happened to Holmes. Throw in a crazy former pirate vampire in search of a lost treasure, and it is lots of fun and intrigue. I won't spoil it here for you, but the resolution of the treasure hunt was an interesting twist.

I wish Saberhagen had been able to pen a few more of these stories. As always, Robin Bloodworth's performance is top notch!

I still like Dr. Watson...his is the voice of reason.

Have you listened to any of Robin Bloodworth’s other performances before? How does this one compare?

He is an amazing reader! Love his old accents.

When an ancient evil threatens all London, Sherloch Holmes seeks the aid of an old family friend: Dracula!

I LOVE these two books featuring Sherlock & Dracula, wish there were more. Maybe against a were wolf, or a wizard, the undead? More please!