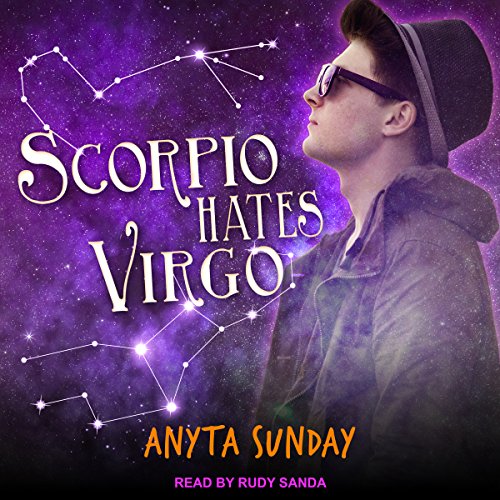 This year is all about healing the heart, Scorpio. It's time to leave negative attitudes and stoic facades at the door, and let others see the real, more vulnerable you.

Percy Freedman is not grieving. Absolutely not, take that back at once. No, he's entirely sure that selling his dead aunt's home and leaving the neighbors he's known for years is the sane thing to do. Who in their right mind would keep the house that smells like all the hugs he'll never have again? Nobody, that's who. Well, except his cul-de-sac neighbors. They all seem to think some paint and new furniture will clean the emotional slate. They all want him to stay. Even his nemesis, Callaghan Glover. Especially his nemesis, Callaghan Glover.

Lured into a game of Sherlock Gnomes, Percy finds himself hanging out with his neighbors more than might be considered healthy. Along with juggling new and surprising verbal grenades from Cal, and his burgeoning friendship with Gnomber9, Percy is starting to wonder if selling might have been the grief talking after all.... That's right, Scorpio. With a little patience, heartbreak might be a thing of the past....

I adore this series, so I was really excited to see they were coming out in audio. The first one had some bad reviews, but I liked book two a little bit better, anyway, so I thought I'd start here (there are loose connections between the books, but you don't really have to read them in order).

I...I can't even. Percy's voice sounds like Cal's should (Percy's the twink-y king of sarcasm and snark, not a Dudley Do-right wannabe), his cousin Frank's voice sounds like a cross between a mustache-twirling villain and one of the nerds from Saved By The Bell, and Cal...oh, my goodness, I had to turn it off after Cal's second or third line. WHY would you make him sound like a stuffy, vaguely British old man??!???! I mean, a New Zealand accent would have made some sense (for everybody, not just Cal), but this? Just...no. He's supposed to be a down-to-Earth graduate student/heartthrob, not a pretentious 55-year-old history teacher.

I'm not returning it because I want the author to have the sale (she's one of my favorites), but if you're at all unsure about getting the audio versions of these books, consider picking up the ebooks, instead. They're fabulous, hold up well to re-reading, and are by turns funny and sweet and intense and satisfying.

Stick with the Book Version

Cute entertaining story, but with the wrong narrator. If his intent was to give Cal the voice of Thurston Howell, III (Gilligan's Island) then he nailed it. Stick with the Kindle version.

This is one of my favorite books finally in audio!

This was such an amazing unexpected delight! I was a bit hesitant, the blurb was cute but I thought it would be an average read. I WAS SOOOOO WRONG!!!!

This book is beautifully written, almost lyrical at times and so very unique in the MM genre. I adore the writing in its clever complexity, geekiness and attention to details that make characters pop and steal your heart! It was delicately witty, funny and charming.
I loved to slow seductive burn and unfolding of Cal and Percy's feelings to each other interwoven in their growing friendship and diminishing nemeses-ness. Every character is so unique, one of a kind and very specific, in a way that draws you in until you feel like you too live in the cul-de-sac with them. The buildup was almost tangible, sexy and kept me at the edge of my seat without big drama in the story, and it was so captivating to read. I wanted them to get together already but keep teasing and skirting around their attraction because it was almost better than a full on sex scene. ALMOST…. When Cal and Percy finally do get together it is so rewarding and thrilling, sexy and touching. I needed this book to clear my palette in-between, albeit good, cookie- cutter books. I want more, I NEED more!
***Narration***
This was the first book I read in this series, it made me fall in love with Anyta's writing and I later got all the books in the series. I was thrilled to learn they are coming out in audio and the first one was really good. I liked the narrator, the first time I listened to a book narrated by him, and his rendition of the characters.
In this book you really get the sense he grew into the characters and the story, the voices feel natural to him and fit the characters well. I really feel like this book is an improvement from the first one, and it is my favorite in the series so it was a delight to listen to.
Looking for the next one coming out on audio soon!

I have enjoyed reading this story. I read Leo loves Aries and decided to see what this one was about. Very good story.