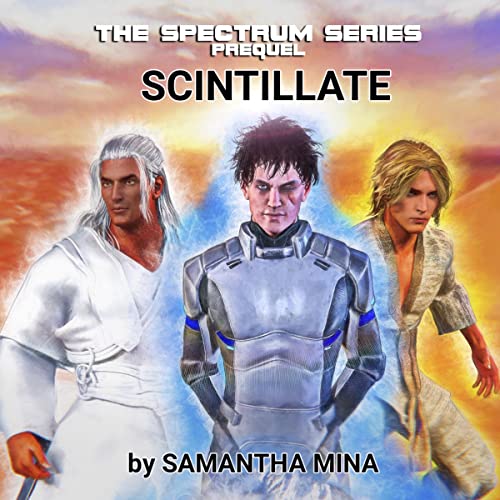 We all know the story of Conflagrian Red Leader Scarlet July, Ichthyothian Diving Fleet Commander Cease Lechatelierite, Ex-System Warrior Fair Gabardine, Multi-Source Enchant Commence July Lechatelierite, and the Second Ichthyo-Conflagrian War they committed their lives to. But, what about the First War that transpired two generations prior? Scintillate tells the story of the inaugural international conflict to plague Second Earth and the heroes on the frontlines through it all, forever defining the course of their nations' histories: Scarlet’s grandfather, System Water Forces Captain Spry Scintillate; Cease’s grandfather, Diving Fleet Captain Terminus Lechatelierite; and Fair Gabardine’s grandfather, "Useless" Servant Auricle Capitulum. Decades before Scarlet, Cease, Fair and Commence were born, the future of their world was shaped by the triumphs and tragedies that befell their ancestors.

The six-novel Spectrum series follows an eclectic cast of young adults fighting to survive and find their place and purpose in the wars plaguing the dystopian, future world of Second Earth. From fantastical world-building, to combat sequences, to geopolitics, to the exploration of a soldier's psyche, to racial and social commentary, to the turmoil and confusion that comes with the teenage years, to forbidden romance, this sextet is a fast-paced, character-driven, sci-fi/fantasy adventure for the Divergent and Hunger Games generation.

Samantha Mina graduated at the top of her class at the University of Virginia (UVA), majoring in Political Science, Anthropology, and English, and has since worked in law, government, human resources, and office management. She has served as the Director of Support for Arnold Air Society Area II and holds lifetime memberships in various academic honor societies. In addition to the prize-winning Spectrum Novel Series, available online and in bookstores nationwide, she has poetry, short stories, research, essays, articles and artwork published in several literary magazines and journals. Her debut novel was honored in the American Fiction Awards. Her personal story and acting were featured in Discovery Health Channel's Mystery Diagnosis Program (S09E07), airing internationally. She lives in Reston, Virginia, a few miles outside the nation's capital, but regularly traverses the country for her book tour.