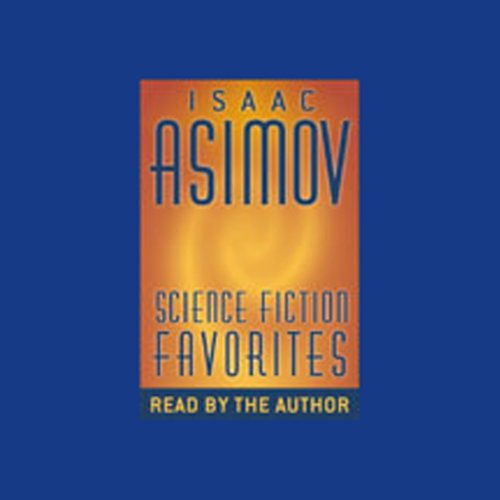 "You may have noticed that I speak of pocket computers. The story was written in 1957 before there were any pocket computers, and now there are. So, it's a little prediction that I managed to make. Of course, the pocket computers I thought of weren't quite like the ones they have now, but that's a detail." - Isaac Asimov

More than 50 years after publishing his first story, Hugo Award-winning author Asimov remains one of the great names in science fiction. Almost single-handedly he transformed the field from the romantic and Gothic legacy of Jules Verne and Edgar Rice Burroughs into the rational, clear-minded genre that exists today. In such classics as The Foundation Quartet, Asimov captured imaginations with tight, intricate plots set in distant but believable futures. Many of his innovations, such as the Three Laws of Robotics, are now stock devices in science fiction writing and films, and his ability to tap into his extensive knowledge of science and technology gives his fiction a veracity unmatched by any other writer in the field.

This selection of some of Asimov's most enduring and unforgettable stories is read by the author himself. These vintage tales encompass the full range of Asimov's versatility, while displaying his puckish sense of humor.

At first, I thought Asimov's voice was a horrible fit for an audiobook. "Now I know why he's an author, not an actor!" However, as I kept listening, the more personal and real connection he had to his work came through, and the less-than-stellar acting was overshadowed by the warmth and feeling of getting to know a bit of Asimov.

By the end of the last story, "The Ugliest Little Boy" (if I remember the title correctly), both the listener and Asimov are completely drawn into the narrative, and, frankly, it was a tear-jerker. I was glad I had stopped for gas when I hit the end of it, because it would have been hard to pay attention to the road and the emotion of the story and the narration.

Even if you're not a science fiction afficionado, these stories transcend genre boundaries and make great listening.

All fans must listen for the masters voice

CONTENTS:
Introduction
I Just Make Them Up See
Someday
The Feeling of Power
Living Space
Satisfaction Guaranteed
The Last Question
Jokester
The Immortal Bard
Spell My Name With an "S"
The Ugly Little Boy

A real treat having the stories read by the author

I don't understand some peoples objections to Mr Asimov's reading. He actually does a great job! And what's better than hearing the stories read the way they were intended to be.

How wonderful to hear his voice

People will be certainly reading Asimov's stories in print hundreds of years from now. His Foundation books are perhaps the best science fiction ever written. When I chose this title I was hoping only for a few gems and expected to hear the stories narrated by a professional actor. To actually hear Asimov's voice telling his own stories was, for me, wonderful. Sure he sounds a little funny - like the way he pronounces robot as "row-bit" - but to me there was something fantastic about hearing his inflections and his comments as he read his own stories. Some of the stories were wonderful and others were merely clever. All were worth listening to. Compared to the other audio books I have listened, this one is one of the very best.

It is rather amazing (to me at least) how great these stories are. I mean, granted that his ideas about the Multivac, a computer that is miles long and requires specialist to interpret the results, is a long way from the way things actually turned out, but usually the kernel of the idea that he was playing with in a story has merit worth of examination. I especially liked the story where everyone forgot how to perform arithmetic. (After hearing this one, I computed the tip for a meal out by hand that evening, instead of pulling out the calculator in my cell phone, just to honor Dr A.)

Of course, Asimov did not sound anything like I expected, but he did well in the narration and his comments before and after really helped me understand why he wrote a story in the first place.

I had never heard of most of these stories, so they were off the usual beaten Asimov path. I especially liked the last one, "The Ugliest Boy in the World". The purpose of this story was less interested in examining some scientific principle and more of a character piece. (And it may be the best thing that he has ever written.)

I will probably never listen a second time to most of the books that I download from Audible, but that will not be the faith of this one.

HALF OF INFINITY IS STILL INFINITY

SHOW ME THAT MULTIPLICATION TRICK AGAIN
If you are a fan of Asimov and you have never heard is voice, than this is a must. I have been a fan for decades, but never heard him speak. I was expecting an old man voice. Maybe like a college professor? I knew he was Jewish, but this was interesting. He sounds like the caricature of Brooklynn Jews you hear on TV and he sounds young. He also talks likes he writes, which I always suspected. Asimov has the knack of writing like he is a friend of yours sitting across from you talking about the weather.

All the stories are good, none are bad. The Ugly Little Boy was the greatest. I have read this story several times and read the book he wrote with Robert Silverberg and it is still a tear jerker. Asimov even cried when he read it. Satisfaction Guaranteed was my next favorite. This is a story which has Dr. Calvin in it and she is trying to perfect robots.

Asimov explains before each story, why he wrote it and says a few words after each story about the story. This adds a lot of charm to the listening. One interesting thing he said, was that if he had to take a college class on his writings, that he would probably flunk. When they go to analyzing his work, he would not understand all the deep underlining meanings he was suppose to have in his writings.

If your already a fan, this is a must or this is a good place to start, if you don't know him..

Asimov Reads His Own Short Stories

This collection features several of Isaac Asimov's best-loved short stories along with some additional commentary by the author. The reading is crisp and sound quality is excellent.
The high points of the collection have to be "Spell My Name With An S" and "The Ugly Little Boy"; the stories clearly illustrate the author's humour and sensitivity. In particular, the conclusion of "The Ugly Little Boy" is unique in Science Fiction by being a commentary on Humanity and Motherhood; you can clearly hear the author moved to tears while reading it.

Great text, great audio quality, read by the author himself.

This is one of the most prolific writers in the history of mankind reading a personal selection of his own texts!
I'm kind of a fan of dr. Isaac Asimov. When I first saw this book on audible it was an instant buy. As soon as I begin listening to it, I had goosebumps all over. By the end of the last story I had a tear forming on my eye, not only because the last story is beautifully sad, but because it was the end of the book.
Well, if you like science, if you like stories, and you appreciate good well writen stuff: this is the way to go.
If you don't know Asimov: you are missing a huge chunk of good literature, you should try and catch on with his books as soon as possible. Try out "THE LAST QUESTION" - read it, be in complete awe, and then come and buy this audiobook and rush to chapter 9.
Now- I wonder what can I get here that will get as thrilled as this audiobook did!

As said in the title, the stories in this book are top notch, but the author's voice actually takes AWAY from the listening experience. He has a very nasally voice and I think the text would have been much better treated had they hired an actual actor to read the content. Apart from that, it is very hard to tell where one story starts and the next one begins, as there is no announcement or pause to let you know that any of the stories have ended.
-
7.9 / 10

What did you love best about Science Fiction Favorites?

What other book might you compare Science Fiction Favorites to and why?

Ray Bradbury's "Fantastic tales of Ray Bradbury" Here to the man and his coments about his wrightings.

What does Isaac Asimov bring to the story that you wouldn’t experience if you just read the book?

the feal for the author as a person.

adding the man and the story gives a better feeling for the hole.