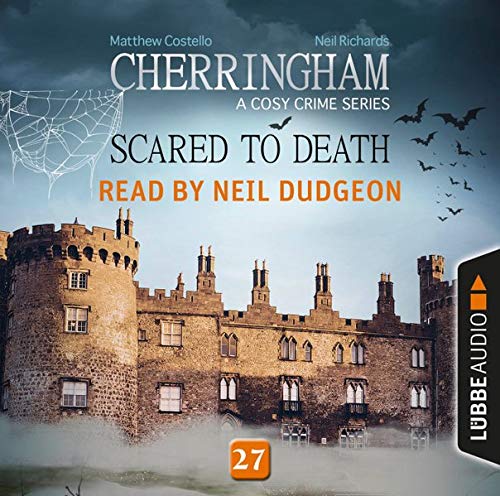 When classic horror movie star Basil Coates becomes the victim of a series of scary pranks, the local police put it down to a crazed fan. Just pranks, after all... But with Halloween only days away, the spectre of murder suddenly visits the ghostly Coates mansion on the hill outside Cherringham - and Jack and Sarah find themselves caught in a mystery worthy of Basil's spookiest roles...

Cherringham is a serial novel à la Charles Dickens, with a new audio episode released every two weeks. Set in the sleepy English village of Cherringham, the detective series brings together an unlikely sleuthing duo: English web designer Sarah and American ex-cop Jack. Thrilling and deadly - but with a spot of tea - it's like Rosamunde Pilcher meets Inspector Barnaby. Each of the self-contained episodes is a quick listen for the morning commute, while waiting for the doctor, or when curling up with a hot cuppa. For fans of Agatha Christie's Miss Marple series, Lilian Jackson Braun's The Cat Who series, Caroline Graham's Midsomer Murders, and the American TV series Murder She Wrote, starring Angela Lansbury.

The narrator of the audiobook, Neil Dudgeon, has been in many British television programmes including the roles of DCI John Barnaby in "Midsomer Murders" and Jim Riley in "The Life of Riley". He is also known for his film roles in "The Nativity", "Sorted" and "Son of Rambow". In 2012 Dudgeon starred as Norman Birkett on BBC Radio 4's Afternoon Play series written by Caroline and David Stafford.

In particular, Neil Dudgeon is an excellent narrator. He gets the accents perfectly, especially Jack’s Yankee New Yorker vocalization.
The stories are always interesting, quirky, and not easy to put down.
I do believe I have the complete Audible collection and I’ve been re-listening to them for the past months and enjoying them all over again!
Very enjoyable and I have recommended the Cherringham collections to friends and family.

Love these books!
Would you believe a small Cotswold town holds an old dark castle?
Love this reader who brings these stories to life!
Can you believe old and new vampires never die? Or do they?
On Halloween two old actors whose fame was built on playing Dracula awaken old wounds and deceptions to bring a close to their anger.
All this takes place in quiet peaceful Cherringham.

I enjoyed the characters and plot very much in this one. The haunted/horror movie theme was fun. I'm not a fan of horror movies but enjoyed the memorabilia collection and old actors as a base for the mystery.

This short is also in compilation Book 9

as usual, this story is very well done.o i didn't disappoint. next one up please...

Story included in another Cherringham compiliation

I bought this title in March and then bought the Cherringham - A Cosy Crime Series Compilation - Cherringham 25-27 the following month in which this story is one of the three stories. I didn't realize my mistake until I started listening to this title in June. Don't order this title if you intend to get Books 25-27 in the one title.
I love the Cherringham series for the stories, the characters, and the narration.

How do they do it?

The Cherringham mysteries are so good. I never guess “who dun it”. I type I love and with great characters and an excellent reader too

I never get tired of this series!

Love each plot with the old characters as well as the new. Gives an interesting look into various personalities . Admire and enjoy Neil Dudgeon's narratives.

Disappointed in this one

I have listened to most of the Cherringham series. This audio book seemed more cheesy and absurd than the others and, while I have never been a fan of this narrator, his gravelly voice was just more grating to my ears this time. I don't know if I will continue with the series.


This was about an old horror film actor who was having spooky things done in his home to his wife and him until it killed him, then it was up to Jack and Sarah to figure out who killed Basil Coates.

As to the narration: Neil Dudgeon does a fantastic job on the voices and the emotions he reads with.