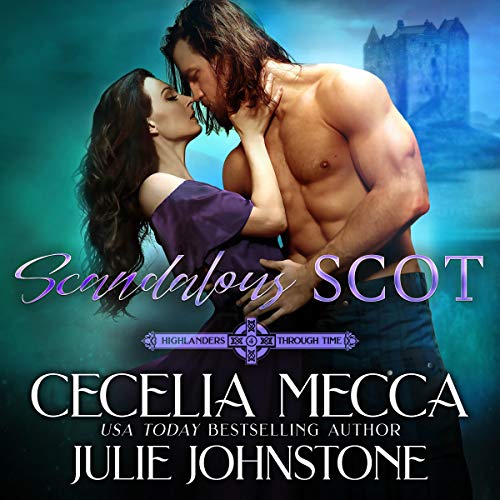 He stole a kiss, and found a wife.

Ian McCaim is used to following in his brother’s footsteps — even if it takes him to medieval Scotland. When he finally completes the time travel ritual, the magic lands him next to Hightower Castle and his big brother, Greyson, is there to greet him. As soon as the rest of the family returns to Hightower, the McCaims can finally go home, but in the meantime, Greyson has a task for Ian: Charm the man whose son is fated to play a pivotal role in the Scottish War of Independence. An easy task — or at least it would be if Ian were capable of behaving himself.

After a lifetime of having endured stares, Màiri Kelbrue is used to being looked at — the strange mark on her cheek ensures it. So when the handsome man she encounters near her father’s loch gawks at her, she assumes the worst. Until he kisses her. The passion she feels for the stranger stuns her — she’d thought to marry her childhood friend, but never once did he make her feel like this. And then the unimaginable happens — when the stranger escorts her home, he tells her very religious father exactly what happened between them.

Within a sennight, Ian and Màiri are rushed to the altar. Ian plans to return to the future sooner rather than later, but the bride he didn’t ask for soon becomes the only thing he wants. What will he do when it’s time to go home?

In the final book of the series you travel back in time with the final brother and meet up with the others. Never fear it's a HEA. while all the loose ends were tied I am not ready for my time with this family to end. I hope we get to revisit them again.

Julie Johnstone & Cecelia Mecca have written a captivating, thrilling, romantic time travel series that will keep you on your toes. I found myself holding my breath at times. Anticipation overwhelmed me, the sensual romantic parts gave me goosebumps and I wanted to climb through the book. It’s that hot!
Excellent story line, flawless character development, strong secondary characters and the ending I hoped for. I want there to be a book five telling us what everyone is up to a few years later. Tim Campbell didn’t just narrate these four books, he performed each character, each accent, each time period beautifully. Tim brought each word to life. Unlike reading a book where the authors give you a sense of each character’s attitude, you still input your own sense of the character as you read. But with an audiobook and an exceptional narrator like Tim Campbell, it is like watching a movie. You don’t second guess how a character meant that, you hear their tone, you feel their attitude. That is how Tim performed this entire series. Outstanding!

Great books that ties up the whole line!

This is a series of books that are really a wonderful read. This last book ties up the entire story line instead of like so many others who leave you wanting to know what happened to the characters. All in all a great read you if you're into this genre!

The Highlanders Trough Time Series takes the characters from Medieval Scotland to present day New Orleans and back again. Shona MacKinnish was accidentally sent through time from thirteenth century Scotland to late twentieth century New Orleans, where she marries and raises a family. When she suddenly disappears, her husband insists she has been drawn back through time. Five years after her disappearance, her sons, using her journal and research found in their father’s study, unbelievably embark on their own time travel adventures. Will they be able to find their mother? Will they be able to find their way back to their own time? Will their return help their father?

The final story in the series is the story of Ian, the youngest McCaim brothers, and Màiri Kelbrue, daughter of the Laird if Clan Kelbrue, and where we find the answers to the above questions. Ian arrives in thirteenth century Scotland right outside Hightower Castle, the home of the MacKinnish clan. He is greeted by his older brother Greyson, who immediately enlists Ian’s help in convincing Laird Kelbrue to consider coming back to the side of the Bruce. When the group meets a young woman on the way, Ian is so taken that he kisses her. Not understanding the repercussions of this behavior in the thirteenth century, Ian tells all and quickly ends up married to Màiri. What happens now?

As the story unfolds, the group waits for the arrival of Rhys and Reik, and hopefully their mother, so they can attempt a return to the twenty-first century and home. Ian and Màiri are both shy and confused, married to strangers, and have a lot to work out before that happens, not the least of which is that it is going to happen. This a great story with wonderful characters (past and present) and a perfect ending for the series. There’s magic, drama, danger, an exciting blend of history, and a few surprises. You will laugh a lot and cry a little. Once again Tim Campbell does a fantastic job. His narration is spot on. I am not a time travel reader, but this series is top notch. I enjoyed it and highly recommend it.

Best story, I am Obsessed with Time travel Love stories But this one offers so much more! And out of 35 or so I've listened to from audible Truly 1 of the very very best!