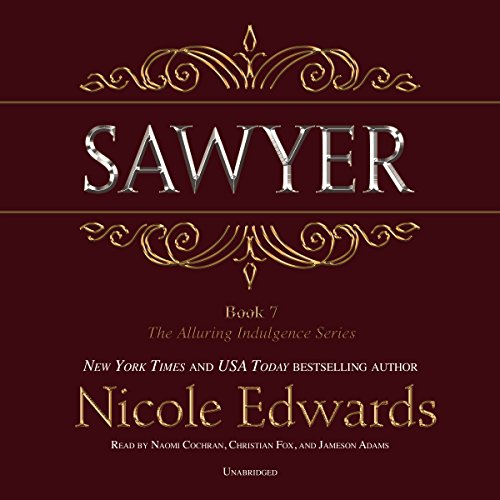 Sawyer Walker has never had an issue with women. The female population tends to swarm toward him, in fact, and he's never had a complaint. But there's one woman Sawyer has always had his eye on - one woman who won't give him the time of day. In recent months, it would seem that Kennedy Endsley is opening up to Sawyer, but she's got a few surprises in store for him. As hard as she finds it to resist the handsome Walker brother, she's not willing to give in easily. Not when her heart is on the line.

I was so excited to finally get to Sawyer & Kennedy story but I'll admit it was lacking in my opinion. It was still a good book with hot sex and this awesome family but something about the relationship just left me a little blah. I guess I just didn't feel that "Need you now" tension between them like all the other couples. It wasn't bad obviously if I still gave it 4 stars. The sex was hot and in the end I enjoyed the story line. Not sure if I'm looking for Brendon story since he's been so "Poor Me" for the last 2 book, I hope the next one is not a pity party.

The narration was good.

The female narrator had only one good character voice and the others were so terrible. The voice she used to portray secondary characters made them sound like they were stereotypical ignorant hillbillies. As far as I could tell, they were not meant to be portrayed in this manner. I typically really enjoy all books written by Nicole Edwards but this one lacked something that all the other books I've read in this series had. I can't quite describe it but if pressed I would say the book lacks passion. It's almost as if all the characters are acting on auto pilot. They are doing what they do because they feel like they are supposed to be doing it...not because they feel an all consuming pull towards the person that completes them. The smexy scenes were all very mechanical too...disappointing.

After first reading this series I decided to purchase the audiobooks. I have loved them all and wasn't disappointed until this one. Nicole is a great writer, but the female narrator did a horrible job portraying her wonderful characters. She made it sound like all of them other than Kennedy and Sawyer were slow country bumpkins, nothing like most central texans in this area. After being introduced to those characters in the other books it was disappointing to hear. Unfortunately, if this had been my first experience with Nicole's books I wouldn't have read any further. Fortunately it wasn't and I get to enjoy all of her books.

Female narrator was not so smooth

Male narrator was great but the female was so stiff and choppy. The story was very good. Love the character Sawyer

why do you not try to keep the voices the same. Jessie isn't a twit. why make her sound like like one. oh lordy. that was bad.

This book as the others in this collection was superb, the story line was believable and the passionate way the two main characters developed made this book perfection!

Good story but narration is off

The male narrators were awesome. The female narrator however was lacking. Her attempt to portray a Texas drawl was horrible. She made intelligent characters sound like complete bumbling idiots, especially the male characters. If it weren't for the male narrators, I wouldn't have been able to finish this book.

The woman narrator made it almost impossible to listen but story was great so I persevered!

Loved the story and the narration, but every time the female narrator went into male mode I cringed. She made Sawyer sound like Forest Gump.

Sawyer is My Favorite Walker

In previous books, Sawyer seemed immature and self-absorbed, pulling juvenile stunts to get attention. However he turned out to be my favorite Walker brother, a kind & gentle man who genuinely cared about veterinary Kennedy.

Kennedy was slow to trust Sawyer, remembering how he was in high school rather seeing the man he had become. Rather than trying to dominate or control her, Sawyer uses charm, real affection, consideration and patience. I enjoyed listening as their relationship unfolded, with Sawyer slowly winning Kennedy's admiration and trust.

The only part I didn't like or understand is why the Walker boys are running a sex club. Travis and Kaleb are now married with children, Zane is married, Brayden is engaged and Sawyer is in love. Why do these men want to run a business that caters to cheating spouses and violent sexual predators? Very strange...