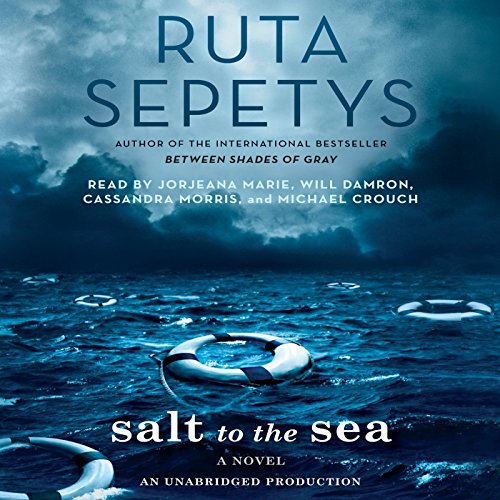 Salt to the Sea

New York Times best seller! For fans of Between Shades of Gray and All the Light We Cannot See, best-selling author Ruta Sepetys returns to WWII in this epic novel that shines a light on one of the war's most devastating - yet unknown - tragedies.

World War II is drawing to a close in East Prussia and thousands of refugees are on a desperate trek toward freedom, many with something to hide. Among them are Joana, Emilia, and Florian, whose paths converge en route to the ship that promises salvation, the Wilhelm Gustloff. Forced by circumstance to unite, the three find their strength, courage, and trust in each other tested with each step closer to safety. Just when it seems freedom is within their grasp, tragedy strikes. Not country, nor culture, nor status matter as all 10,000 people - adults and children alike - aboard must fight for the same thing: Survival.

Told in alternating points of view and perfect for fans of Anthony Doerr's Pulitzer Prize-winning All the Light We Cannot See, Erik Larson's Dead Wake, and Elizabeth Wein's Printz Honor Book Code Name Verity, this masterful work of historical fiction is inspired by the real-life tragedy that was the sinking of the Wilhelm Gustloff - the greatest maritime disaster in history. As she did in Between Shades of Gray, Ruta Sepetys unearths a shockingly little-known casualty of a gruesome war, and proves that humanity and love can prevail, even in the darkest of hours.

“The talented narrators excel in capturing the tone of their characters...[They] work together to create a vivid and well-rounded reading experience, [and] bring forth the truth of the wartime experience.” (Booklist, starred review)

A Polish girl, German soldier, & Lithuanian nurse are the heart of a group desperate to flee at the end of WWII. Alternating POVs portray backgrounds steeped in sadness and despair as they board their "savior" ship.

The story is artfully crafted with rich details, loosely based on facts. She is not just a good writer, but an excellent storyteller, bringing to light the worst maritime disaster in history. Ever heard of it? Most hadn't until now. The true details from the epilogue highlight how well she wove in the fact with fiction. Don't read other reviews giving away the rich details, just enjoy. If you like this one, "Between Shades of Gray" is even better.

This is an absolutely beautiful performance of a powerful, haunting story. Right up there with The Book of Aron and The War that Saved My Life and Echo....a quartet of life changing books about WW II, all recent. You'll carry these characters in your heart for a loooong time.

Where does Salt to the Sea rank among all the audiobooks you’ve listened to so far?

I haven't read that many, but this is somewhere at the top.

What was one of the most memorable moments of Salt to the Sea?

Oh, the whole book is memorable; but the horrid and sad moments really stick in your mind. I expect I'll dream of them tonight.

Johanna - maybe because she is a healthcare worker too, or maybe just because she gave the group so much direction.

The characters are so well-written. I think Sepetys is a master of observation. Ingrid, the blind girl, is so well-illustrated - I have many blind family members, and Sepetys very accurately described her body-language and movements. Alfred is such a horrid character, but again, so accurately depicted.

Another magnificent read by Ruta! A detailed depiction of the tragedy of war as seen through the eyes of four young adults.

Would you listen to Salt to the Sea again? Why?

Yes. The story, although ultimately filled with sadness, it is captivating. Each character, from Joana to the wandering boy, is well developed.

WWII was filled with tragedy and Sepetys dealt with it honestly. And yet she also included hope and redemption.

This is a well written fictional story about a true event. The author's note at the end says it all "..when the survivors are gone we must not let the truth disappear with them. Please give them a voice."

I am a huge fan of history. I love to learn the hidden history. until I came across this book I had never heard of the sinking of this ship. I was brought to tears. I highly recommend this book.

The voices were wonderful, the narrative unforgettable. This easily ranks as a favorite historical fiction.

A Look into History

As the author stated in the author's note of this book, this is a nearly unknown event in WWII history. She creates well-drawn characters who are forced to rely on each other to get to the ship despite nationality, background, age, or personality.
The characters rely on each other, mistrust each other, depend on each other... and do the same for themselves. It's nuanced and suspenseful and generally well-read.
I'm a bit am bivolent about the narration. It was well-done, but having American narrators use American speech and only occasional German or Polish... it just sat a bit odd. I suppose it's better than putting on accents, but I'm sure native German/Lithuanian/Polish speakers could have performed this book and made it a truly terrific audiobook experience.
Well worth your time, money and/or credit.

Any author that frequently uses the word "suddenly" is a no go for me. Definitely intended for a younger audience. Narrators were a bit over the top with their dramatics. So much that it got annoying to listen to. Wouldn't recommend.

This was a really good boom about something most people know nothing of. I didn't and I consider myself well read. Great characters and perfect narration by four performers. Definitely worth the money.

The book was both heartwrenching and stunningly beautifull. It explored a tragedy I've never heard of. How extremely sad it is to know, that millions of people had to go through the same pain and misery, as the caracters of this novel. I loved, that they used different voiceactors for the 4 main caracters. It truly added much to the listening experience. I believe this book will stay with me forever.

This book is so so good. I like the multiple points of view. Every character has his own voice (not only because there are diffrent narrators, which by the way are all great and really bring the charaters to life). I love that Ruta Sepetys did so much reseach on the Wilhelm Gustloff and the time period. There are so many tragedies that happened during the 2. world war that have somewhat been forgotten or haven't been talked about. Such an amazing story that provokes all your feels :)