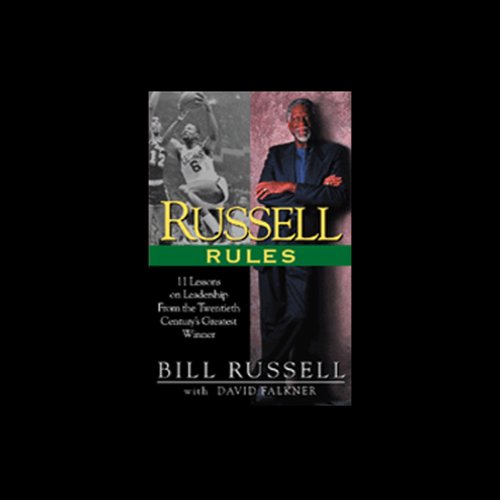 Bill Russell has been hailed as the greatest team player of the 20th century. As a five-time NBA Most Valuable Player, he is one of the most important basketball players ever, and with 11 championships as player and coach of the Boston Celtics, he is one of basketball's greatest winners.

In Russell Rules, he shares the insights, humor, memories, and, most important, the 11 essential "rules of success" that made him and his team perennial champions. In addition, he shares his personal thoughts on his legendary battles with Wilt Chamberlain, his views on how other players (Michael Jordan and Kareem Abdul-Jabbar) would have fared with him in head-to-head play, and stories from his days playing with such Celtics greats as Bob Cousy, Tom Heinsohn, and coach Red Auerbach. Russell Rules offers inspiring lessons on commitment, personal integrity, team ego, and craftsmanship that are as relevant to the entrepreneur or parent as they are to the athlete.

"This audiobook will have special appeal to basketball junkies and fans of NBA great Bill Russell. Memories - personal and professional - provide an inside look at basketball in the days when Russell and the Celtics ruled the courts. Narrator Rif Hutton reads with passion, as if articulating his own memories and beliefs." ( AudioFile)

I love and will implement the 11 rules of Celtic Pride in my personal as well as business life.

I was hoping that Russell would read his book throughout, but it was good the way that he started the book out.

His rules for success and winning are pretty straightforward and easy to follow if you're willing to dig down deep and hang in there!

Bill Russell talks on and on and on some more about the Boston Celtics. It was too much already. I really respected him before reading this book. I thought there was more to him than just the Celtics. I guess I was wrong.