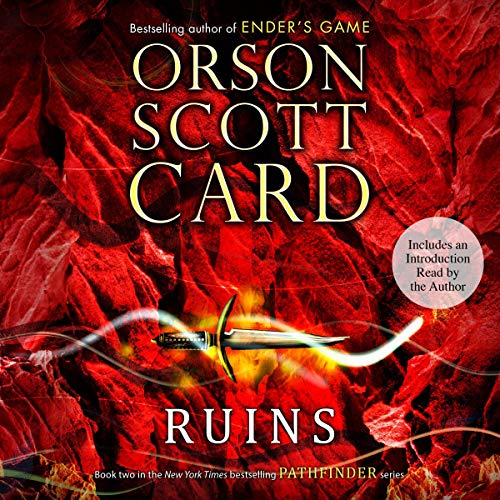 From the author of Ender’s Game, the major motion picture!

When Rigg and his friends crossed the Wall between the only world they knew and a world they could not imagine, he hoped he was leading them to safety. But the dangers in this new wallfold are more difficult to see. Rigg, Umbo, and Param know that they cannot trust the expendable, Vadesh - a machine shaped like a human, created to deceive - but they are no longer certain that they can even trust one another. But they will have little choice. Because although Rigg can decipher the paths of the past, he can’t yet see the horror that lies ahead: A destructive force with deadly intentions is hurtling toward Garden. If Rigg, Umbo, and Param can’t work together to alter the past, there will be no future.

COULD YOU POSSIBLY BE A LITTLE MORE INCOHERENT?
This book and the last book I read by Card have just made me mad. Card is using his famous name to sell crap. I love the early Card, before he became a preacher. Card had some good ideas, but instead of putting them in one book, he decided he could make more money by writing trilogies, knowing his name alone would sell the books. In this book he demonstrates how to stretch a short story into a book.
1. Have about five characters.
2. Have those characters, bitch and fight and discuss every single step they take.
3. Make sure the characters constantly misunderstand each other.
4. Have the characters even debate their and the other characters actions in their own heads. Make sure and really draw out these misunderstandings and insecurities.
5. Have the characters say things figuratively, so other characters can get literal and you can have middle school jokes about what was really meant.
SOMEONE ALWAYS MISUNDERSTANDS WHICH LEADS TO CORRECTION

I am going to try one more time to read a modern Card, (Earth Aware) and if that is as irritating as this, then I will stay with only pre 1990 Card books.

Android One "What was all the discussion about?"
Android Two "It's a human thing."

I'll start this by saying I'm a huge Card fan. Ender's Game is my favorite book, and I loved Pathfinder. I counted down the days until this was published, but now I'm left disappointed.

Card's usual depth and complexity are there in the story, and I cannot deny it isn't well written. But he significantly faulted, in my judgement anyways, by making the drama in this book all about the characters and their inabilities to trust each other.

A little bit of resentment towards each others is one thing, but there were whole chapters where the characters would argue or fight or just plain whine the whole time. It was distracting, removed me from the story, and even made me stop listening for chunks at a time. Honestly, it was so bad I wanted to slap the characters. It didn't really feel "real" considering what we'd known about them from the last book.

He's all set up for a climactic book three in which there will hopefully be real drama and conflict. This one felt forced, as though in order to justify a book two he forced out character drama that didn't need to exist and borderline overwhelmed the rest of the story.

I cannot wait for book three and I put my hopes on that one. This one felt as if half of it was unneeded, and downright annoying.

I also was excited to get the sequel to Pathfinder, a book which I really enjoyed. This book, however, was a waste of my time. It's convoluted twists and turns, backward and forward through time were too complicated to keep track of, and the constant guessing/explanations of each alternate reality possibility were boring and wore on my patience. Where was the editor?

There is constant potty talk, which really gets old, I wonder if anyone thinks of potty issues as much as OSC. I agree with other readers that the constant bickering was a drag on the story as well. There was no charm in the characters this time, I lost my love for them. The ending just made me irritated and I’m not sure if I have a desire to read the next book or not. When you fall out of love, sometimes it’s best just to walk away.

What was most disappointing about Orson Scott Card’s story?

Fist of all, I am a huge Orson Scott Card fan, and have almost every book he has written. This is by far his worst effort.

The characters spent 90% of the book bickering with each other. While "teaming" together, the characters were constantly annoyed and upset with each other, whining, complaining, and disgruntled. This constant sniping and bickering was not necessary for the plot, and made for a miserable listening experience.

I'll buy into the idea that the way the characters felt was realistic, but not what I look for in fiction.

Grave disappointment. I kept waiting for the "friends" to stop snarling at each other, and to just move on with the story, but it was not to be.

I loved the first book, Pathfinder, and was so looking forward to the sequel. What a disappointment.

Card in a bad Mood

The first section consisted of kids bickering and Card indulging himself in time travel ridiculous conundrums. The bickering became so annoying I never finished the story and now I'm in a bad mood.

I enjoyed listening to the book, but there's lots of filler consisting of characters bickering that added nothing to the story and was actually painful at times. Real conflict is part of great story-telling, but filling pages with characters making the same old hackneyed jabs at each other is the author padding.

The positives of the book are a variety of interesting characters and a world of wonder and confusion where you don't know who, what, or when to trust. We have time travel, misbehaving human-like robots, dangerous computers, water-people, tree-people, perception-enhancing parasites, and mysterious mice. Somehow the novel combines a quest with the complexities of cold-wars and cast systems. This second book is much more ambitious than the first.

Are preemptive strikes justified? Where is the line between human and non-human drawn. How can you establish trust? Do the ends justify the means? In the end, our heroes find out just how difficult it can be to stop people from killing you when you don't even know why they want you dead. While the book has an exciting ending, it's hard to say whether the ending is a frustrating cliffhanger, or a reasonable tease for the next book in the series.

A good follow-up, but could have been better

What did you love best about Ruins?

I guess the characters and wanting to find out what happens with them after crossing through the wallfold.

Finding out what's in the other wallfolds, but unfortunately you only learn about a few of them. The least interesting thing was maybe some of the needless banter between the characters.

I really like Stefan Rudnicki's voice and characters. Kirby Heyborne and even Emily Janice Card did a good job. But having different chapters done by different narrators throws you off a bit - but not as much as in Pathfinder.

No, not really. It was okay, but at the same time kind of blah, and drawn out.

I'm invested now, so I will probably get the next book when it comes out. That's kind of funny actually. I didn't know this was a 3-book arc until the very end of this book, when I heard the music that only plays at the beginning and then the end. I was like, WHAT, that's the end. Then I realized that... oh, it's "to be continued".

Overall I thought it was way too long and drawn out for not much happening really. Then some things just didn't make since. I hate to give a spoiler, but at one point in the book they are ready to go to a different wallfold only to find thousands of people waiting excitedly for them on the other side, waving. They don't want to cross over into a mob of thousands even if they look friendly, so they travel back in time a few days before the mob arrives. But then they find that only two people are their liasons and NO ONE ELSE wants anything to do with them for years. That just didn't make since.

Don't get me wrong, It was entertaining, just a bit too much fluff and some plot issues in my opinion. Then also, the problem with any time-travel story where you can do it willy-nilly, you have to wonder why they don't use it more to fix things. They DO in many cases, but in others they don't and you have to wonder why not. OSC does a decent job explaining the why and why nots at times, but sometimes it just doesn't add up. Again, that's the issue with time-travel stories.

If you could sum up Ruins in three words, what would they be?

What other book might you compare Ruins to and why?

The book is great, but like many an OSC book in a series, there is absolutely no way you could follow this one and have a complete understanding of the story without reading the first book. As a reader, I get the distinct impression that OSC writes the story first, and then chops them up into separate books to make them more easily digestible. This one is no different; it begins as if you just sat the first book down to grab a drink and you're picking up where you left off. It's is great, but I I highly recommend listening to the the first book,or at least the last few chapters, to get a sense of the story first. It took me a while to remember all the details.At any rate, still great. Waiting for the next Mithermages series installment!

Why a Different Narrator for each Chapter?

I really enjoyed the book and the whole story line. I can't wait for Book 3! My problem with this audiobook is the fact they used different narrators for each chapter. I'd just get use to one reader and hearing the characters, then they'd change to another narrator for the next chapter. For me, this took some getting use to and I question why?

Too much arguing between the characters.

Too much arguing going on between the characters. It distracted from the storyline.