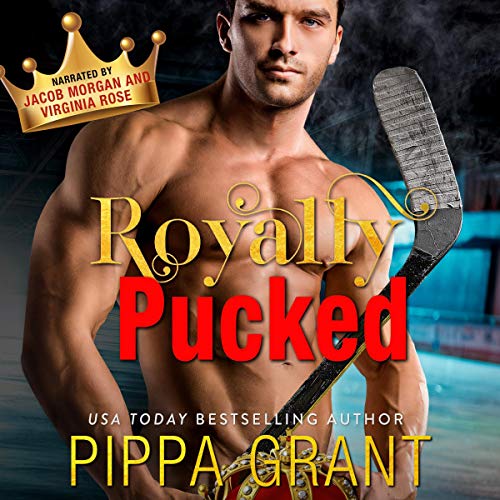 A hockey-playing prince, a most improper lady, and one accidental pregnancy....

When you’re an heir so spare that getting attacked by a shark is more likely than you ever wearing the crown, you’re only allowed certain liberties. Yet still, those liberties can bite you in the ass.

Even then, I’ve been banished to America for a year under the pretense of playing professional hockey while my father cleans up my latest mess. But trouble follows me wherever I go. Generally trouble of the beautiful female variety, and Gracie Diamonte is no exception. Or possibly, she’s the best exception.

Until the dinosaur suit. The cookie incident. And the accidental pregnancy.

Of course I’ll do the right thing.

Just as soon as I solve that pesky problem of my royal betrothal.

I’m about to be the biggest scandal to rock my country, and there’s a good chance my father may throw me to the sharks after all. The funny thing is I’ve heard that raising children may not be so different from swimming with the sharks. So no matter how you look at things, I am Royally Pucked.

Royally Pucked is a hilariously wrong romance between a spare heir and the lady least likely to ever wear a princess crown, complete with dirty cookies, an emotional support monkey, and lots of pucking around. This romantic comedy stands alone with no cheating or cliffhangers and ends happily with a family of...more than two.

When I originally read the little summary of the book and seen it was about someone getting pregnant I was like great it’s another one of these books but this book was definitely not like any I have listened to before. Definitely worth it I quiet enjoyed it.

This is the second book in the Copper Valley Thrusters Series. I love Royally Romance! Gracie and Manning's story is hilarious, sweet, and sexy. Manning is a hockey-player, and a prince. He is handsome, and caring. Gracie, a baker, is lovely, feisty, and independent. They are opposites attract, and they are perfect together. Their story is beautifully written, and really sweet. The supporting characters are great! The Epilogues are hilarious! Jacob Morgan and Virginia Rose did a fantastic job with the narration. Jacob Morgan's accent is very pleasant to listen to. I enjoyed it. Looking forward to listen to more in the series.

A swoony and hilarious story

I love a book that includes a happy, sunshine and quirky girl and a tortured hero. This book has a little bit of everything - sweet moments, fan your face steamy, side splitting hilarity, tearful scenes, and heart squeezing love. Gracie and Manning’s love story has all the feels - expect to laugh and cry. Plus there are x-rated cookies and an emotional support monkey. On the surface, Gracie and Manning appear to be opposites. Manning is a prince from a small European country who has been relegated to the United States to play professional hockey and clean up his image before he has to return to marry the woman he was betrothed to when he was 10. Manning is determined to smile through everything. Gracie is a small town southern baker who barely passed high school, secretly sells x-rated cookies, swears too much and is definitely not princess material. After meeting at a charity event, Gracie and Manning have one quick sexual encounter in the locker room of the hockey team that leads to an unexpected pregnancy, and that is where the hilarity begins. On their way to their HEA, Gracie and Manning have to both learn a lot about love, family, duty, and embracing who you are. While they follow the inevitable path to being together, it is painfully hilarious to watch their growth and missteps. Sprinkled liberally throughout this beautifully paced story of Gracie and Manning’s HEA, there are also a number of characters from the Pippa Universe in this book. They are woven seamlessly into this story so rather than being overwhelming or detracting from the main love story, these characters are beautiful and hilarious additions to the unfurling of Gracie and Manning’s dance of love, passion and hilarity. Jacob Morgan and Virginia Rose are the perfect narrators for this book and add even more perfection to this story. Plus their accents are perfect for Manning and Gracie. With Royally Pucked, Pippa Grant once again proves she’s the queen of rom-coms. And Manning is indeed a swoon worthy book boyfriend.

I am so enjoying all of Pippa Grant’s books. Love how all of the stories overlap into the other series. This story was hilarious, hot, and completely entertaining. Loved the narrators too. Looking forward to the next book. ❤️

I love this series and new I would love reading Gracie and Manning's book.
I got to meet them in The Pilot and The Puck Up and fell for how sweet and fiesty Gracie was with Joey.
Manning is a swoon worthy Prince who's a spare heir to the thrown, which means he gets to play professionally hockey.
Pippa has interwoven the books in this series to overlap stories in many places.
Gracie is a kick ass baker who has Manning eating out of her hands and at the same time irritating big sis for a double win !
One of the things I enjoy most about this series is it isn't cookie cutter and too similar to the other books. This one was funny but also really sweet.
Virginia narrated Gracie so well and Jacob's accent was panty melting!

The story takes place in the great Thrusters ice hockey world build by Pippa Grant. The performance of the readers was fabulous. Hearing a southern accent and the "royal" accent of Stolland. The 3 bonus epilogues had me laughing so hard I cried.

This book had me in stitches. I adore Gracie and Manning... I am not normally one for the accidental baby troupe... but this one has cookies.. and the Berger twins. I totally mispronounced Stoland when I was reading on kindle. Stay for the epilogues. I was laughing so hard my dogs were staring

There were moments I was.laughing out loud. It was a fun story but she kept saying "oh my dawg". not once or twice but all the time. It became annoying.

I read this a few years ago and decided that it deserved a listen. This audiobook makes the story so much more than it is in print! Virginia Rose and Jacob Morgan take Gracie and Manning to a new level. Gracie’s southern girl sass is in full force. I have to say that I am in awe with the number of voices that Jacob had to pull off with this book and it was flawless! This is one of my favorite Pippa couples and I’m so glad I listened!

Both Gracie and Manning were introduced to each other in Pilot and the Puck-Up and even though it was obvious something would come from their initial meeting, I wasn’t all that interested. I really have no reason as to why I wasn’t eager to jump into their story other than Gracie seemed a little boring to me… luckily she showed off her ballsy side during this book. Gracie is the little sister of Joey (who I loved) and a baker in Goat’s Tit who secretly specializes in dickookies… how does Pippa Grant come up with this, it’s perfect. Manning is a prince who got shipped of to play hockey for the US in exchange for some good press and promo for his homeland. He always appeared happy go lucky in previous books but we find out there is more beneath the surface with Manning. The story line and accidental pregnancy was great but the best part of the book for me was the side characters. I think I am really just a sucker for the Berger twins, I thought Zeus would be my favorite when I was introduced to him in Mister McHottie but after listening to this book I am leaning more towards the quiet Ares! Between Ares and Loki, I was laughing a good amount throughout the book and I can’t wait to get more of Ares in Beauty and the Beefcake!

Virginia Rose and Jacob Morgan did a great job narrating. Virginia Rose pulled off Gracie perfectly, she really had the ability to bring the determination and even panic that Gracie felt to a realistic level. Jacob Morgan is always an automatic listen for me so it was no surprise that I loved his narration in this one.