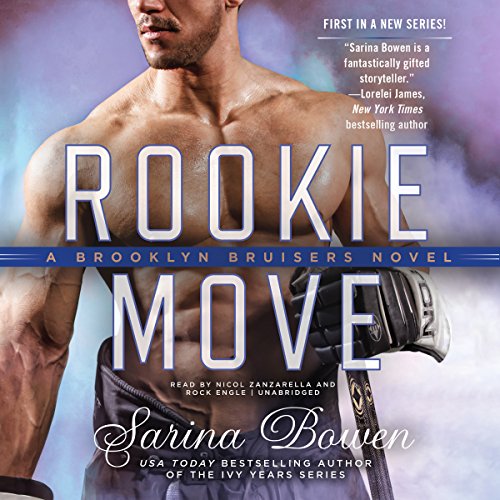 The first novel in a sexy new series featuring the hockey players of the Brooklyn Bruisers and the women who win their hearts.

Hockey player Leo Trevi has spent the last six years trying to do two things: get over the girl who broke his heart, and succeed in the NHL. But on the first day he's called up to the newly franchised Brooklyn Bruisers, Leo gets checked on both sides, first by the team's coach - who has a long simmering grudge - and then by the Bruisers' sexy, icy publicist - his former girlfriend, Georgia Worthington.

Saying goodbye to Leo was one of the hardest things Georgia ever had to do - and saying hello again isn't much easier. Georgia is determined to keep their relationship strictly professional, but when a press conference microphone catches Leo declaring his feelings for her, things get really personal - really fast.

I love second chance romance, it makes insta-love believable to me. I enjoyed Leo & Georgia's story, they were a fun and sexy couple. And hello Hockey... I knew I'd like this one ;) I will be listening to the rest of the series now.

The Narration was good. Both Rock & Nicol did a great job with these characters.

Where does Rookie Move rank among all the audiobooks you’ve listened to so far?

While not my favourite from this author, it's still a fabulous 5 star read.

Which character – as performed by Nicol Zanzarella and Rock Engle – was your favorite?

Both actors did a great job at offering strong and believable characterisation. Nicole captured the voice and emotions especially well.

Nope, but only due to time constraints.

A stunning novel. Emotive, passionate, a storyline to sink your teeth into, and with one of the hottest sports ever, Rookie Moves was beautifully written and performed.

Rookie Move is so good

I love the Brooklyn Bruisers series in audio so much. Both narrators did an amazing job portraying Leo and Georgia, and I have listened to it many times before. I’m never going to get enough of this book. And the whole series.

Rookie Move is the first book of the Brooklyn Bruisers series, featuring Leo Trevi, a side character from the Ivy Years series. Leo is starting his hockey pro career and has just been transferred to the Brooklyn team, completely unaware that Georgia Worthington, his high school sweetheart and the love of his life, already works there as the team’s publicist.

They have a whole lot of history and chemistry, but also a whole lot of awkwardness between them. Leo is determined to win her back, while Georgia is worried about the implications of dating a player given her job. They will need to clear the air and resolve their past issues while also dealing with a bunch of new ones, like the fact that Coach Worthington, Georgia’s father, doesn’t want Leo on the team and would like nothing more than to have him transferred asap.

I love every Sarina Bowen book I have ever read, and this series is just another example of her magic. It’s hockey romance at its best. I specially love the fact that it is linked with the Ivy Years series, sort of a spin-off, and that we finally get Leo’s story. Given the few details we learn in The Fifteenth Minute that relate to Leo’s love life, it is better told in a more mature setting. It’s a beautiful story, both emotional and fun, and flawlessly written.

I love Sarina Bowen’s books because she has an innate talent to create three-dimensional, complex and relatable characters. I love her sense of humor, it permeates her writing in a very unique way and will surely have everyone laughing, even while crying. I specially admire her because she embraces difficult issues and topics rarely addressed in romance, like rape in this case, and does it naturally and with so much sensitivity. Her style of writing is entertaining and emotional, and leaves you thinking in so much more than just a HEA.

Yay. Already looking forward to book 2 I really enjoyed this first novel in Sarina Bowen's new series following the hockey players of the Brooklyn Bruisers. Loved the story, loved the characters (Leo is just yummy), loved the dual POV and love all the supporting characters. Fantastic start to a series with so much potential following rookie hockey player Leo Trevi and his childhood sweetheart Georgia Worthington. A true second chance romance that is full of love, heartache and a little bit of angst. Really had me rooting for their HEA.