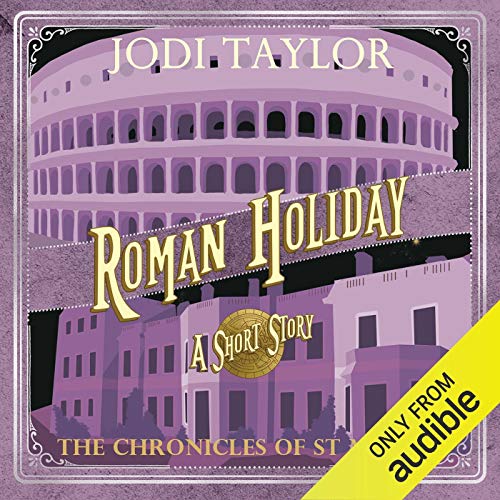 Another rollicking short story from the Chronicles of St Mary’s author Jodi Taylor.

Question: What sort of idiot installs his mistress in his wife’s house? Especially when that mistress is Cleopatra VII Thea Philopator, queen of Egypt and the most notorious woman of her time? Answer: Julius Caesar - poised to become king of Rome. Or as good as.

Question: At this potentially sensitive point in your political manoeuvrings, who are the last people you’d want crashing through the door, observing, recording, documenting...? I think we all know the answer to that one.

Jodi Taylor is and always has been a history nut. Her disinclination to get out of bed for anything after 1485 can only be overcome by massive amounts of chocolate and sometimes, if it's raining, not even then. She wanted to write a book about time travel that was a little different and, not having a clue how difficult this would make her book to classify, went ahead and slung in elements of history, adventure, comedy, romance, tragedy, and anything else she could think of. Her advice to booksellers is to buy huge numbers of her books and just put one on every shelf.

Read or listen to this one in private as you’ll be laughing out loud.
I know this short story is listed after A Second Chance in the series, but I think it should be read before.
The characters, the camaraderie, all have a level of familiarity that does not fit after.
And OMG! Mr Markham’s bosoms! The stampede! The arrival back!
Even if it’s out of the series timeline, I really appreciate the levity after the previous emotional wringer.
I’m surprised the narrator was able to read this as dead pan as she did - I would have been laughing all the way through!

Quick trip to Rome without any trouble, Right

Very short story about the escapades of St. Mary that includes Rome, Julius Caesar, Cleopatra, an asp and Malcolm and of course trouble. It will make an hour commute fun.

I like these short stories. I am looking forward to the other books in this series.

A cute short story in the world of the St. Mary’s time travelers. While not the best book in the series, and somewhat less plausible that some of the others, even given the unlikely antics of the St. Mary’s crew, it is a pleasant little diversion nevertheless.

You can't help but to love the cheeky perspective on history and time travel that Jody Taylor exhibits in her writing. This short story is no exception.

Love the story plots, the characters and all the ‘fun’ the have. The length of the stories are perfect for my commute.

fantastic book!! I love the characters!

I love the life and people in these books! Any time I can be in their world I am happy! Makes me happy!

This time the time traveling team heads to Ancient Rome and reveal unknown sides to the relationship between famous Cleopatra and Carpurnias, Julius Cesar’s mistress and his long suffering wife ... or was she?

As an audible... perfect for a single day round trip commute

Not bad, not great

Not very amusing, but a quick listen, a bit educational, a bit fun. Cleopatra, asps, centurions. What else do you need? An oxen stampede? Oh yeah --that too.

Lots of great humor in this quick and fun little story. While not the most engaging plot, it's approach is utterly enjoyable. Welcome to you next chuckle.