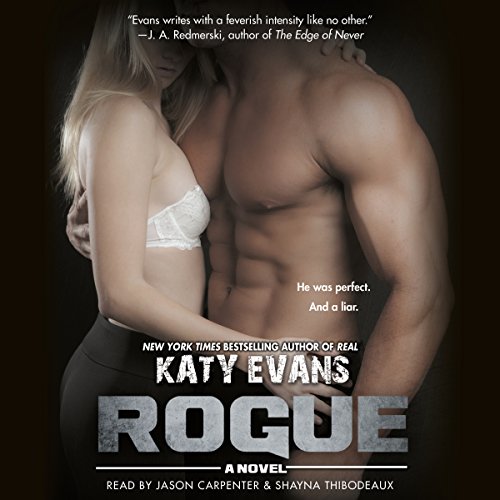 He says he's no good for her.

Brook Dumas found Remington Tate in REAL, and now it's her best friend Melanie's turn to find the man who makes her heart sing. After years of searching, one night in the rain the strong and mysterious Greyson King comes to her rescue. He's bold and maybe just the lover, friend, and protector she's been searching for. When they make love, he says her name like it means something. Like she means something - and that's everything she's ever wanted.

He disappears for days without a word, and when he's around he says he'll only hurt her. But when he's away, her heart hurts more.

Then Melanie uncovers the dark world he'd been determined to keep hidden and suspects that their random first meeting might have not been so random after all.

Caught in a free fall of emotions, Melanie has no one to catch her but the man she should be running from....

But what do you do when your Prince Charming has gone Rogue?

Would you consider the audio edition of Rogue to be better than the print version?

I just don't understand. Why audible insists on using Shayna Thibodeaux as a narrator for all these great upcoming books when I have heard and read just how unsuitable her voice is for romance.

The story was great. I love Katy Evans writing style. Her books always include a great plot along with the romance.

Shayna Thibodeaux. Stop using Shayna Thibodeaux as a narrator for romance. She is more suitable for teen books that DON'T read as a romance. I just really don't understand why audible ignores the bad reviews. Follow the fans advice withShayna Thibodeaux, STOP using her as a romance narrator. Please, the audiobook might sell more. Her voice is very immature, she sounds like a 14 year old. This book is supposed to be a bit steamy and sexy but it sounded ridiculous.

I stopped listening and bought the e-book. It was wonderful. I'm returning this book.

Mel Got her very own Remy..

If you could sum up Rogue in three words, what would they be?

Drama, Sweet and Sexy with a capitol S

Grayson because he was similar to Remy and you knew that he always had a good reason for what he was doing..

Which character – as performed by Jason Carpenter and Shayna Thibodeaux – was your favorite?

When he admitted to watching her for so long and saying I don't care how many people you have been with you're mine.

To really get a feel for this book I would suggest starting from book one which was real, mine, Remy.. then read this one so that you understand why Ms. Evans didn't talk about Remy and Brook so to much. it picks up a month before Remy and B get married but if you read Remy you know that book ended right after they got married.. I am looking forward to reading about Pandora's story.

Please, please, please, do not use Shayna Thibodeaux for any of the upcoming narrators for this REAL series (or any audio book for that matter). She ruined the story for me! If I hadn't already liked Melanie from the previous 3 books, I would have disliked her character because of her voice. Melanie's voice was grating, annoying and so unpleasant to listen to, I found myself checking to see how much time was remaining for Melanie's POV and hoping to hear Jason again.

What was one of the most memorable moments of Rogue?

I loved Greyson and his possessive and devoted behavior. I tried to get past Melanie's voice and actually enjoy Melanie's POV, but it was difficult. All the scenes where Greyson and Melanie interacted and the sex scenes were hot! I think my favorite part was when Melanie awoke from her coma.

Who would you have cast as narrator instead of Jason Carpenter and Shayna Thibodeaux ?

Jason Carpenter was great. ANYONE other than Shayna Thibodeaux. Although my favorite male narrator is Sebastian York, when I see he's one of the narrators, I almost purchase the book without reading the reviews!

Did Rogue inspire you to do anything?

Anxiously await for the 4th book, "Ripped" which will be Pandora's story. I hope we get to see more of Brooke, Remy, Melanie and Greyson.

I absolutely love the REAL series! Remy and Brooke's story was so touching and wonderful. I fell in love with Remy...and of course with Sebastian York as the narrator, how could you keep from falling in love with Remy!
I came very close many times during the story to take other reviewers advice and stop listening and purchase "Rogue" on my Kindle, just to escape Shayna Thibodeaux, but I stuck it out to the end!

Female Narrator just bored me too death - too bad

The story needs some more background interests and storylines

Would you be willing to try another book from Katy Evans? Why or why not?

If the male narrator told the whole story! The female narrator killed it for me she seemed to be always going 200miles per hour no difference in the storylines

Could you see Rogue being made into a movie or a TV series? Who should the stars be?

I was really disappointed since the previous books were so much better.

Horrible narration! Story was Ok though...

Would you try another book from Katy Evans and/or Jason Carpenter and Shayna Thibodeaux ?

Horrible narration! Jason Carpenter was ok but Shayna Thibodeaux wad horrible! Totally ruined what could have been a good story. I would read other books by Katy Evans but not if Shayna Thibodeaux is the narrator. I was just too annoyed.

Shayna Thibodeaux did give any feeling where it needed it. I couldn't get into the story very well because the voice and the way she read just did not match the characters or the mood. I rarely ever leave reviews but was too put off not to. Hopefully the people in charge of picking narrators for audio books read these reviews and chooses better in the future.

Rogue was all kinds of yummy fantasticalness!! I've officially added Grayson King to my list of the "hottest and baddest of bad boy book boyfriends". If you've read Remy, Mine & Real, wait 'til you get a gander at Grayson! This story of his and Melanie's love affair was dramatic, intense and sexual, with a touch of suspense. The banter between these two was witty and sarcastic, but endearing as they both tried to keep from being to vulnerable. Unfortunately, I'm not a fan of Shayna Thibodeaux's narration, it's like listening to a poorly delivered spoken word/poetry session--not my cup of tea for 7-9 hours. The saving grace was the male narrator and the overall storyline. Grayson was definitely the gritty dark version of prince charming, and he will rock your world! I highly recommend this book, and would spend a credit on it in a heartbeat.

What disappointed you about Rogue?

I got 4 hrs into it and just couldn't take anymore. The female narration is horrible! All I imagine is someone standing there reading it to me. She talks fast and breathy, it's so annoying. I can't get in to the story at all. Very disappointed. I'm returning this and buying the book. I love Katy Evans but not this narration! I don't know why they didn't use the other ones from the previous 3 books.

takes a minute to get used to the reader

took a minute to get used to the reader but, still well read. I enjoyed it

I TOTALLY enjoyed this book - as I did the others in this series. I think Katy Evans does an excellent job of providing a solid plot structure, realistic dialogue (well, let's be honest...the bedroom talk is unlikely, but hopefully there are men out there who talk like that during sex!) interesting characters and lovely, heart racing sex scenes. I have found that her novels are in the top class of romance novels - not too many cringe worthy scenes nor times when your brain just screams, 'no way!' They are very decently written for this type of novel - meaning, I'm not comparing Katy Evans to Toni Morrison or anything - but for romance novels, hers are some of the best.

I did feel that this novel got off to a bit of a rocky start, thus the 4 stars. I had a hard time feeling the connection between Melanie and Greyson, and felt like their characters were a bit too undefined early on. By the half-way mark, however, I was totally invested in the characters and their story.

Many people have commented on Shayna Thibodeaux's performance - and the comments are all over the board - some say she sounds too young, some say she sounds too old, some say she reads too fast, some say her performance sounds rote. I know that no reader is going to please everyone, and I admit that I find her performance problematic. After listening to numerous of her readings, I have finally concluded that I really, really like her performance. It's her voice/accent that is the problem. She reads very well (though, certain pronunciations are off - sachet does not rhyme with hatchet, and it's yin and YANG not yong). Her pace might sometimes be a tad fast, but it fluctuates nicely - she definitely increases the tension when necessary, puts in light notes when called for, seamlessly transitions voices for different characters and really brings the story to life. The problem for me is that her voice for all the female leads is so bad. I don't know if it is by choice or if it is just her natural speaking voice. Her vowels are all 'off' to the standard American ear - maybe a Michigan/Chicago/New York dialect? Vowels, particularly, sound scrunched and swallowed - and to many ears it is just ugly and painful to listen to. It sounds like a female version of Christian Slater. Her voices for other characters, though, do not show this same tendency. Greyson's voice is great, as far as I'm concerned - natural sounding, with nice open vowels. So if she could just round out her voice for female characters, I think she'd be near perfect.

however, I wasn't a fan of her voice. she sounded older.

as for the story. it was good. not great not bad.