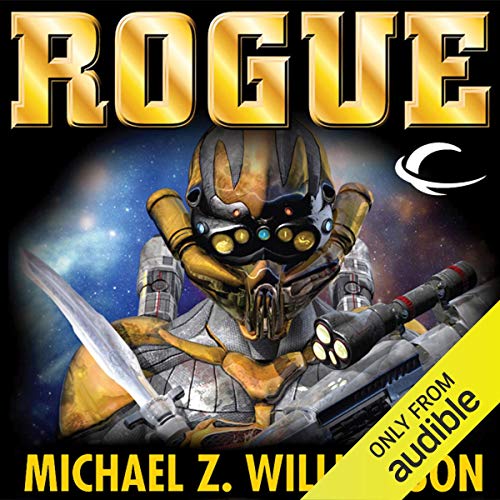 Kenneth Chinran commanded the elite unit assigned to take out an entire planet in a terrible war. Millions died; billions more perished in the aftermath. One doesn't send a sociopath on such a mission. A sociopath might not stop. Chinran did stop, but in the process nearly lost his sanity and his soul.

But one of Chinran's men was a sociopath going in. Now he's a trained sociopath with the knowledge and firepower to take out entire tactical teams, evaporate through security cordons and change identity at will. Who do you send after a killer like that?

There's only one answer: the man who trained him. The man who made him.

The galaxy's greatest and deadliest dad ever

Rogue picks up where Weapon left off. Ken Chinran has returned to Freehold with his daughter in incognito. He is nothing if not a hard working, keep-to-himself, quiet guy devoted to his daughter who we watch grow up. You can't help loving this guy. Soon however (with his hands full with a teenage daughter) he is discovered and suborned for a mission to hunt down and eliminate a former soldier under his command (from Weapon) who has gone rogue and is freelancing. The Freehold is anxious to stop him before he is uncovered as a former Freehold special ops guy and further annoy their local neighborhood.

Most of the story is a travelogue as Ken and his "assistant" hunt and track the rogue from planetary system to planetary system. Ken is his usual thorough and unbelievably dogged self. In addition, each system offers a glimpse of societal organizational styles as well as Ken's insightful commentary on the pros and cons of each.

This is more a detective/spy tale, rather than a military plot, but Ken still has ample opportunity to strut his Blazer training. As in Weapon, the narration is superb with a conversational, diary type rendition that is very listening, but still creates dramatic tension when necessary. one can only hope that Ken and his daughter may open their own private detective business and keep this franchise going strong.

I was excited to find a new book by Michael Z. Williamson! I'm friends with a few hundred other Sci-Fi fans online and FTF, spread out completely around the world; many being deployed military at the moment... Many more of us are X-Military, and in the modern age of the internet we keep the deployed guys and gals company online; we also try to take care of little things here at home for them while they're away, keep them up to date on current events, which includes taunting them about a new Freehold book they haven't got yet!!! I mean, the Freehold stuff is considered "A Must Have Read" for any true Military Sci-Fi buff!!

So I grabbed this latest, slapped it on the iPhone (It kinda rattled around in the 51.5 GIGS left on this phone... I know she loves me, but 64 GIGS in a phone? Seriously??) and then I prepared to listen and be ready to really rub it in hard on the deployed friends... "What? You had incoming half the night and broke your docking cable?? Awwwww! Too bad dude! You have NO idea what you're missing! Word of advice Bro, Shells or no shells, You'll quit breaking those docking cords if you'll take your headphones off BEFORE grabbing your gear and trying to rush off to your post... just thought I'd mention that!"...

...and I promptly got bogged down in visiting guests, and relatives, and grandchildren (OK, exception made for the Grandkids!) and other things, and couldn't listen to it!! But I am aggressive, motivated, and determined! I had some friends stop by unexpectedly last night, So I connected the Phone to the Bose and fired it up.. We have just now finished it in one 12 hour long listening spree! I LOVE books like that! They come along so rarely!

Points of interest for me: It started out a bit weird, and I got some sideways glances, but thankfully that moved on briskly! Then much later I actually felt sorry for the Main Characters, far in the future, having to deal with Earth's insane "this will make us safer" laws.. except those insane, arbitrary, knee-jerk laws aren't the "Far in the Future Sci-Fi Part"!! Sadly, most of those are real right now! Highly succulent. One friend commented that his assistant kept pulling everything they needed out of thin air... we all stared at her a second before shouting "HELLO?? SCI-FI BOOK!?!?" (Geeze... There's one in every crowd!)

The book seemed to drag a little with about 5.5 hours left to go, but I can't say that's Mr. Williamson's fault; as I said, we were listening to it all at once without a break, So it's probably just me in this case, no one else mentioned it. Either way, it seemed to pick up again almost right away, and I'd rather have more Williamson than less!

The Narrator does a good job! He keeps the book moving along without it sounding "pushed", and he sounds good on larger speakers!

WELL worth the Credit, but more importantly it's well worth 11 and a half hours of your time to listen to! I'll get maxed out on Credits again at the end of the month, our "time" is something we don't get more of, so I try to keep that in mind while recommending books.

Since I have so many friends that are Marines. I know most would love this type of book because we can relate to the ideas the authors presents. The description of training would bring back long lost memories.

What was one of the most memorable moments of Rogue?

How the group heading to Earth was surprised by all the government restrictions and how dependent the population was on the police.

What does Stephen Bowlby bring to the story that you wouldn’t experience if you just read the book?

The inflection of his voice and the enthusiasm that he put into reading the story. Stephen Bowlby read the story as if it was his life's story he was telling.

Rogue is not Roguish

A fast paced sequel. answering the question; That one persons war hero is another's war criminal; and what to do about them?

MadMike brings it home to Freehold

Ken trained him, now he's taken that training and gone rogue.
Ken is the only answer to stopping him.

A new and different Adventure

The Range that William's displays is amazing. His stories, especially in the Freehold universe, each have their own voice. Each is unique and leaves readers wondering why we would want another year at Hogwarts, why Marvel superheroes have to fight themselves, and why modern media in general lacks creativity.

I must know Naumann's story.

Great story, wonderful narration, and characters you feel you know and care for. What's not to love?

What disappointed you about Rogue?

Listening to Rogue is like hearing someone read a military after-action report. It talks about things that should be exciting, but all the interest is sucked out of the story.

There is little story arc: the whole thing seems flat.

Really, really difficult to make it to the end. I'm typing this as I listen to the last part of the book... and I really don't care if I miss anything. Oh... and it is so flat that I really am NOT missing anything!

This may be a sequel but it stands alone just as well.

Rogue is in your face and full of action.

I loved the beginning of this book and wish it had stayed with those characters. The story is sci-fi but that is peripheral because with this story, because it wasn't nessesary for the story to be in space. Two opratives are chasing an assasin,that one of them knows but they never see and they keep missig him and I got bored and quit in the middle of the book. Maybe it gets better. It might. I had better books to read.