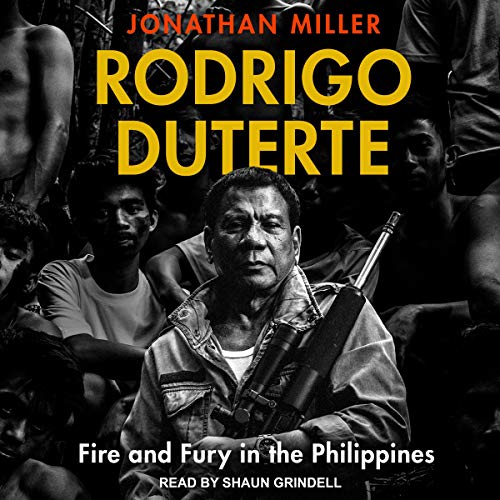 The first biography of Rodrigo Duterte, the murderous, unpredictable president of the Philippines, a fascinating, fearsome man and the embodiment of populism in our time.

Rodrigo Duterte was elected President of the Philippines in 2016. In his first 18 months in office, 12,000 people were murdered on the streets, gunned down by police officers and vigilante citizens - all with his encouragement.

Duterte is a serial womanizer and a self-confessed killer, who has called both Barack Obama and Pope Francis "sons of whores." He is on record as saying he does not "give a shit" about human rights. Yet he is beloved of the 16.6 million Filipinos who voted for him, seen as vulgar but honest, a breath of fresh air, and an iconoclastic, anti-imperialist rebel.

Through interviews with Duterte himself, his sister, daughter, and son, two former presidents, old friends, death squad hitmen, and relatives of his victims, Channel 4 News's Asia Correspondent Jonathan Miller shows that far from the media cartoon of The Godfather, John Wayne, Hugo Chavez, and Donald Trump rolled into one, Duterte is a sinister, dangerous man, who should not be taken lightly.

“This book is a history, but also a fable in a time of increasing authoritarian populism. It is a great read, crackling with moral outrage.” (Weekend Australian)

The book was not bad

I found this book while searching for a book material on President Duterte after I've moved to Manila and got engaged to a Filipino citizen. One of the few books out there about the President in so much detail. However, I can't help but find the author biased and accusing in his narrative instead of just sticking to the facts and quotations and letting the reader decide sides and make conclusions. Some of the resources used confidently in the book were later discredited after the book's publication. Still nonetheless a detailed perspective of President Duterte and his background. Remember however that it's just one perspective and it would be wise to not get carried away and draw radical conclusions before you make further research.

Woe is my country

Such a tragic depiction of the state of my country. From an emerging economic tiger in the region to what it is now, A republic that is a rung lower than a banana republic. Is there still hope for the Philippines ? I seriously doubt it. Sadly