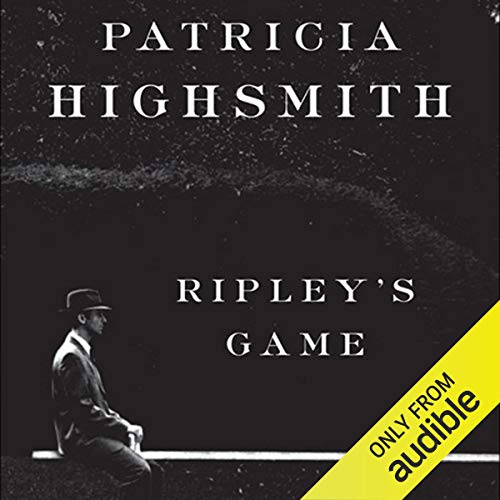 With its sinister humor and genius plotting, Ripley's Game is an enduring portrait of a compulsive, sociopathic American antihero.

Living on his posh French estate with his elegant heiress wife, Tom Ripley, on the cusp of middle age, is no longer the striving comer of The Talented Mr. Ripley. Having accrued considerable wealth through a long career of crime—forgery, extortion, serial murder—Ripley still finds his appetite unquenched and longs to get back in the game.

In Ripley's Game, first published in 1974, Patricia Highsmith's classic chameleon relishes the opportunity to simultaneously repay an insult and help a friend commit a crime—and escape the doldrums of his idyllic retirement. This third novel in Highsmith's series is one of her most psychologically nuanced—particularly memorable for its dark, absurd humor—and was hailed by critics for its ability to manipulate the tropes of the genre. With the creation of Ripley, one of literature's most seductive sociopaths, Highsmith anticipated the likes of Norman Bates and Hannibal Lecter years before their appearance.

Brilliant and disconcerting at the same time

While this is probably my favorite Highsmith/Ripley novel so far, it is also the most unsettling. She manages - by introducing a new counter-Narrator (Jonathan) - to make Ripley's amorality seem even more fragile and desolate. Jonathan's wife Simone also stands as an interesting counter-spouse to Heloise. Throughout the novel the twisting and sometimes converging tales of Ripley and Jonathan seem like spinning endless images mirrors. Each narrator reflecting the existential, blood-splattered flatness of the other. It was brilliant and disconcerting at the same time.

What could Patricia Highsmith have done to make this a more enjoyable book for you?

I love these books but there are times that the plot is so unbelievable that I get very uncomfortable. I know that Ripley is a sociopath but he takes risks, particularly in this book, that make no sense at all. Killing for reasons that have nothing to do with him and which have no chance for profit or preservation. And yet he is loveable and you identify with him and don't want him to get caught.

Kenerly is my favorite narrator to date. He speaks french, does different accents. His voice is soothing. When he is speaking for women he doesn't do a drag queen voice like some books I've listened to. His performance is invisible with no irritations to remind you that you are listening to a book instead of reading it. I believe he is the reason I have purchased this entire series.

Yes. The first book made a wonderful movie so why not film all of them?

What did you love best about Ripley’s Game?

That it wasn't just Tom Ripley anymore - now we have Trevinie to learn about also. I loved that the story is told from two different intersecting points of view.

What other book might you compare Ripley’s Game to and why?

Which character – as performed by Kevin Kenerly – was your favorite?

Jonathan. He's not a killer (well, that's debatable). He's a regular guy - a regular guy just like Tom used to be? And it's fun to listen to his torment as he's dragged through the book.

Maybe when Jonathan watched Reeves demonstrate how to use the garrote on the bedpost.

I wasn't sure Highsmith could keep it interesting for a third book, but she did. The two points of view lets us get to know Jonathan and see how he's sucked into horrible things by Tom.

I am a person who doesn't do series books

I was enamored with the first Ripley book. The second one was just ok, but was still entertaining enough to make me wonder what would flesh out in a third book. I am glad I have continued with the series. In this third book, Ripley gets a little more confident and cocksure of what he is. It is a big departure from the timid, manic Ripley in the first book. This book, oddly, has an almost Batman feel to it as he befriends a man and they go after the Mafia. I enjoyed this book and look forward to completing the series.

Spent to much time with other characters. Not as well developed as the first two. One question I thought Tom was a bi-sexual? Maybe I thinking about the movie. Can anyone listen to this book and not see Tom as Matt Damon? In the end Part III is worth the cash or credit. Tom is still one cool B@stard.

If you could sum up Ripley???s Game in three words, what would they be?

It's crazy but I find myself liking this sociopath! I even become half convinced that he has no other choice but to kill and that the victims deserve it. So far this is my favorite one out of the series but I still have two more to listen to. I can't put them away but find myself listening to them when I should be doing other things.

Only if they're into the series. This isn't a bad book, but it's not terribly compelling either.

The telling of the tale from 2 sides was interesting.

Isn't this a spoilery question? Well, if I had to answer, it would probably be the scene on the train platform (outside the bathroom)

It's Ripley... same ole' bumbling through murders mostly clueless and somehow getting away.

best one so far

I've read the first Three books so far and think this was definitely the best. having two main characters helps to break up being in toms head all the time. unlike ripley underground, this one takes off almost immediately and captivates all the way through.

This is my favorite Ripley book. The performance is fine. I highly recommend this piece of world literature to anyone.

Ripley is a great character. Once again people
and places are an exciting story. Will he ever be caught?