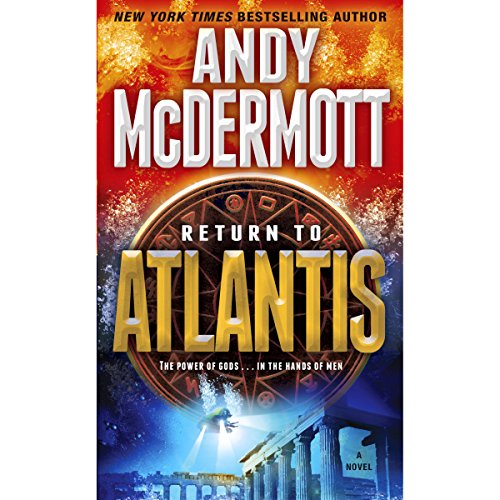 American archaeologist Nina Wilde and her husband, ex-SAS bodyguard Eddie Chase, are back for another heart-stopping, globe-spanning adventure in the latest New York Times best-selling series that "raises the bar to please adventure junkies who prefer to mainline their action" (Publishers Weekly, starred review).

A missing scrap of ancient parchment.

And from the sunken world of Atlantis:

The greatest power on earth.

Nina Wilde and Eddie Chase have stunned the world with their discoveries, from the legendary sword Excalibur to the golden city of El Dorado. Now, by bringing together three ancient statues from three different continents, Nina is about to tap into a colossal energy source - one not felt since the days of Atlantis.

But when the statues are stolen and Eddie is falsely accused of murder, forcing him to go on the run to hunt the man responsible, a violent struggle erupts among a secret, vastly powerful group that wants to control Nina and the earth energy. From a glittering, high-tech skyscraper in Japan to a harrowing chase beneath the Vatican and an underground military vault in Nevada, she and Eddie must piece together an astounding puzzle. For Nina Wilde is the key to a plot that will change the world forever. And Eddie is the key to keeping her alive.

"Adventure stories don't get much more epic than this." ( Daily Mirror)

What did you love best about Return to Atlantis?

The flow of the story a great combination of thriller with history.

What other book might you compare Return to Atlantis to and why?

The story moved so smoothly I can't pick a specific scene

Thrills plus story plus imagination

I am binging the Chase/Wild on Audible after having read the complete series on kindle several years ago. If you like action with a story then this series is for you. The narration was excellent too. All in all an exciting bit of escapism.

Best adventure of Eddie Chase and Nina Wild! Cant wait to start the next book!

This book and the rest of the series are perfect while you weed, fold laundry and do the dishes. Popcorn for your mind

If you could sum up Return to Atlantis in three words, what would they be?

What does Robin Sachs bring to the story that you wouldn’t experience if you just read the book?

I loved his voice, it gave the story a real character to feel something about

This was the first book I read in the series and was a little confused at the beginning, but all my questions were resolved as the story went forward, and it was fun, unexpected and all around time well spent