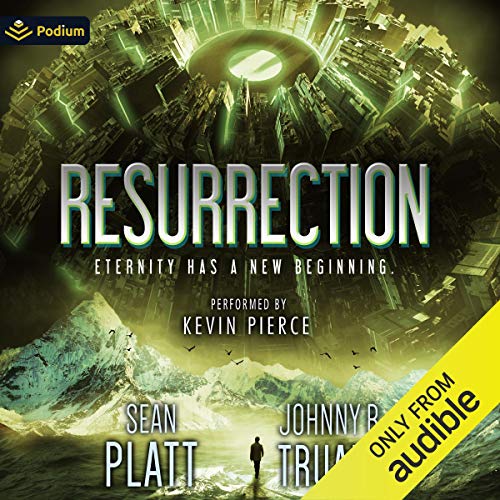 Eternity has a new beginning.

With the human race decimated, only a handful of survivors still wander the planet. They've forgotten the Astrals, and they've forgotten their pasts, ready for a fresh start…or at least that's how it was supposed to happen. In a small desert village without memory, the Lightborn labor unseen - while in the Mullah stronghold beyond, Clara fights an old battle to free the minds of mankind. She's come up against a wall. She's fallen into a trap. And now, finally, the walls have begun to crumble.

The Astrals linger unseen, unable to leave the planet. But now they face a challenge they've never seen before: a new human mindscape that persists despite their best efforts to erase it, a will that refuses to die.

The Archetypes rise, but their chore is an impossible one. They must infiltrate the collective on their own terms and perhaps save what little humanity still holds in its grasp...or force the planet's deadlocked overlords to destroy the human race for good.

This relentless tale of colonization and alien empire is the seventh and final book in the Alien Invasion series by masters of story Truant and Platt, authors of The Beam, Robot Proletariat, the Dream Engine series, and many more.

**Includes a special bonus note read by one of the authors.

The Alien Invasion series was a fantastic journey.

I have read at least 100 books a year for sixty years. Some years, maybe more, but never have I read less. This past year, I read my first sci-fi books. I was never attracted to that genre, but I stumbled onto them accidentally. One series at a time, I found that I liked this genre more and more. I just finished book #7 and, as I read the last few chapters. I found myself quite saddened. The thought of not seeing these characters again got to me, even though I know all too well that all good stories must come to an end! Thanks to the authors for entertaining me for a couple weeks! If I'd known how much I was going to like these books, maybe I would have read them a bit slower!

Great closing book to wrap up the series. Sick with Porter next time he was much better.

I enjoyed this story a lot, excellent book series

This was a long, compmicated, and very involved story, I fucking loved it, it was epic in every sense of the word. It was great, the voice acting was perfect.

I was amazed at how the book ended and I must say this book and the entire series has been amazing. Literally my best series ever. I was of course sad with the change of narrators after book three, but I came to appreciate both narrators for each of their works.
The authors' note at the end of the book is a great expose on the journey they took to bring the series to life.
Awesome writing and beautifully crafted to intertwine the various theories about humanity's origin and possible futures, a great philosophical discourse simplified in attractive literature.

Not the ending I would have liked however it was still good. Listen to the authors notes after the book ends - great insight!

I love these books

Some may not enjoy the way these books unfold, but I really love the way Platy & Truant convolute a plot line and make the story twist and turn. Good job guys! :-)

I thoroughly enjoyed this series. The storyline was very interesting and the characters dynamic. The actions of the characters sparked different emotions as the story twisted and turned. The ending left me deep in contemplation. Great story!

Great series through and through!

Loved the entire series. I had never heard the first narrator before. He took a while to get used to. I have listened to tons of books performed by K. Pierce. When the switch of narrator occurred, I was not bothered as many seemed to be. It only took five minutes to get accustomed to the narrator change. I assume there were scheduling conflicts. Not to mention the first three books were already finished when the first book released.
I loved this entire series. I had some struggles with Eternity and Divinity and knowing who was who, but I was also listening mostly while caring for my toddler twins. I still managed to fall back into place after a bit more listening.
Great series! Great finale!

this is an excellent series that kept me glued to the proverbial screen. if there is one thing that bugged me, and pulled me consistently from the story, it was the lack of character development that would become glaring at times. how many times is a person going to be faced with unfolding events, danger, fear and indecision and freeze in fear? piper and Lilly did this in every single book. but gods was the storyline compelling and riveting.

i really want to be in this story line.....but i know know what the author did.....this is soooooo convoluted sooo many ppp.,..and on top of that he has the same character playing several rolls all the the same time all with the same name....its stupid...i would need a huge white board to just draw the like of 1 character. there is this guy that part of thing...BUT WAIT...there are Three of them alll the same PERSON talking to THREE different groups and acts 3 different ways ....WHY not just have 3 DIFFERENT characters ....its lazy writing and has gotten to the point the author just sounded drunk and was just babble on because nothing makes sense any more. there was a huge shift and NOW 20 plus years have passed