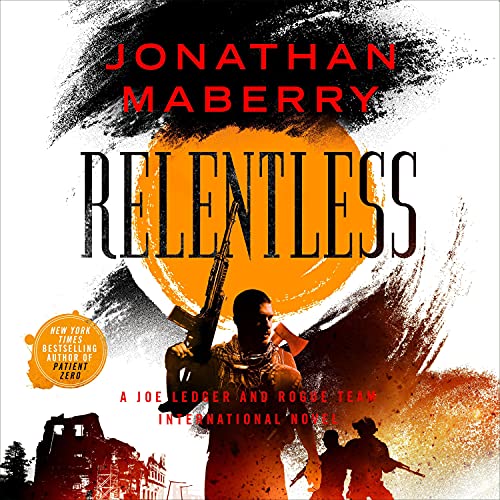 Joe Ledger’s world has been torn apart. The people closest to him have been savagely murdered, and Ledger is on the hunt for the killers. His already fragile psyche has cracked apart, allowing a dangerous darkness to overwhelm him.

His hunt takes him deep into the world of the deadly black-market weapons sales, and standing in his way are a new generation of private military contractors. These mercenaries have been enhanced with cutting-edge cybernetics and chemical enhancements, transforming them into real-world super soldiers. Stronger, faster, harder to hurt, and fitted with built-in weapons. They are beyond anything Joe has ever faced.

But he is not the Joe Ledger they expected to fight. He is defined by the Darkness now. The attempt to destroy him - to break him - has backfired. Instead his enemies have turned him into a far more fearsome weapon.

Everyone is out for blood.

Hoo Ahh! Joe Ledger returns with The Darkness, to take the hunt for Kuga and Santoro and bringing the death and pain to anyone who aligned with them. Joe, in all his fractured spirit and soul, is ready for blood. I loved this book so much, now with Ray Porter's amazing voice bringing this book to life, and it makes it feel so much more real, like you hear the pain and hurt in Ray's voice like the entire story is a full reflection of Joe's heart as it is right after losing his family. 10/10 a very welcome and loved continuation of The Joe Ledger universe and of the book Rage

Only 7 chapters in and I'm already clapping and cheering for Outlaw and RTI!!!!! S/O to Jonathan Maberry and Ray Porter!!!!

What Happened to Jonathan Maberry?

Never in a million years did I think I would ever type this. I am a MASSIVE Joe Ledger fan, and a Jonathan Maberry Fan. This audiobook is so so so so so boring. I could not believe it, it drags on and on and on. What is up Jonathan, maybe COVID isolation affected your creativity, I don't know. I pray the new books are back on track, as I always buy Joe Ledger books the second they are available and can't wait to listen......This one was just too painful to get through.....

I'm tired of everything having a political undertones. These book used to be pretty good but I'm done with them at this point.

I love Jonathon's writing style. I am drawn in from the beginning and Damn if Ray Porter doesn't just drag me along, KICKING AND SCREAMING! He Owns the character of Joe Ledger!

Although all of the Ledger books have political overtones this one was just a blatant podium for left wing propaganda.

The story had some potential with the revenge motif. But, how the help did Bolton and Santoro escape from the Black Site prison.

So many disappointing things in this book. I have been on board since book one. I will buy the next one but, if it's anything like this one it will be my last.

While this may be the longest book in the series this book is too short. 1/4 to 1/3 of the book is used to set up some future battle. Only about half of the plot points are in resolved. All of the “big bads” are paper tigers that cause no damage to “Marty Stu”.

Once my favorite author now not so much

Up to this installment, I would have called this my favorite series hands down. While it not not be a big deal to most, Maberry has taken to using outdated harmful references to autism as well as combining autistic with faggot for a groovy new insult. WTHF? Disappointment doesn't come close to expressing myself on his latest piece of work. I'll finish the book only to get a total on spectrum disparagement then I'm returning it.

I normally am a huge fan of Mayberry, and loved all of the Joe Ledger books.... except this one the story line was lame , same ole same ole, characters were bland and boring , but the HUGE problem was how dark it was, extremely DARK , and as good as Ray Porter is he seemed bored narrating it. I do believe this will be my last Joe Ledger book , and that’s sad because it had a lot of potential of going on and on.

One of the Best Ledger Books.

I read them all. I feel Jonathan is just getting started. My wish list includes a stand-alone novel about Church who deserves his own series.