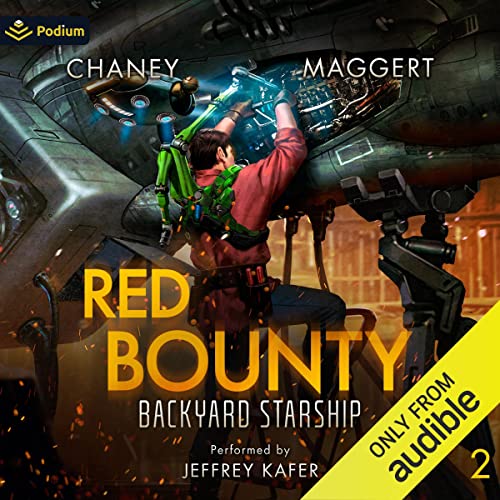 Van left his old life behind, but some things remain the same.

Even in space, crime still exists. After taking a Peacemaker job to find missing fuel, Perry finds something far more sinister than simple theft - a voice, crying out in a forge of heat and flame, and the discovery reveals a series of acts so vicious that nothing short of revenge will suffice.

Following leads across the stars, Van, Perry, and Torina discover the wealthy elite are doing more than just taking fuel.

But it takes money to make justice, and Van has to work. Torina’s land must be restored, and the Dragonet needs new armor, and Van’s sword isn’t going to sharpen itself. So Van throws himself into the life of a Peacemaker, where he discovers that doing his job - and doing it well - makes him a target.

He’s got the will. He’s got the sword. And he’s got help. Now all he needs is a little fuel. And maybe a gun or two.

This is less of a review and more of a warning/encouragement. This is not a standard book format of beginning, middle, end and the usual trappings of such. Much like the first book, the format feels like an RPG video game of a player going around completing side quests, longer missions, visiting new areas. If a dramatized summary of your fallout/witcher/DND campaign is to your interest, you will like the book.

Great sequel!! Lots of action and laughter.
Perry, once again, hilariously puts “Smart Ass” into Artificial Intelligence! Where can I buy a combat bird?

This was sub par everything.

I got both the first and 2nd book before listening to either because they were on sale or i def wouldnt have purchased it after finishing the first. Their not terrible. Not bad enough to justify a return, but they definitely arent anything special and put off a pretty mediocre sub-par vibe. i wouldnt recommend. Plus the narrator is a monotone sounding robot who doesnt seem able to differentiate tones.

Definitely better than the first book in this series in both story and narration. Still some of the same issues of everything being a little too easy. The one time when things were actually getting exiting and producing "Oh, no, what is he going to do now?" thoughts a sudden solution just popped in and the event was over with no clever resolution. The narration was also better using more distinct voices and not just sounding like a documentary.

fun continuance of the series

If you enjoyed the first book in this series you will enjoy this one as well. The story continues and is most enjoyable. This book does have a distinct ending, it also leaves enough of an open world that the adventures can certainly continue. I'm looking forward to the next one. Recommended.

continuing on just as the first book has, it's just the right amount of space scifi and western

Really enjoyable book, the voice acting is among the best, the story has plenty of action to keep you interested and lots of tongue in cheek humor.

If you are looking for the stuffed shirts of Star Wars or the stiff military bearing of Star Trek, you won’t find it here. You will instead find a fanciful blend of fun, humor and adventure that is worthy of your enjoyment. I look forward with hope for book 3.

wish anvil dark was available on audible, book is out so why not?!?! sure doesn't make any sense to me!

What can I say, another great installment in the series. Looking forward to starting book 3 as soon as I finish this review…