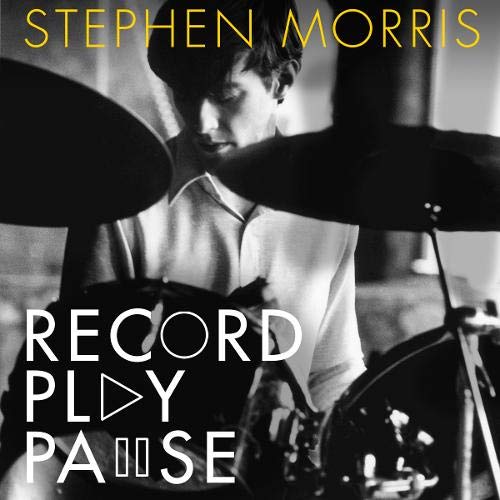 Before he was responsible for some of the most iconic drumming in popular music, Stephen Morris grew up in 1960s and '70s industrial Macclesfield, on a quiet road that led seemingly to nowhere.

Far removed from the bright lights and manic energy of nearby Manchester, he felt stifled by suburbia and feared he might never escape.

Then he joined Joy Division - while they were still known as Warsaw - a pioneer of the rousing post-punk sound that would revolutionise 20th-century rock.

Following two landmark albums and widespread critical acclaim, Joy Division were at the height of their powers and poised to break the US, when lead singer, Ian Curtis, committed suicide.

From recollections of growing up in the North West to the founding of New Order, Morris never strays far from the music. And by turns profound and wry, this book subverts the mythology and allows us to understand music's power to define who we are and what we become.

"Gritty coming-of-age story...plenty of anecdotes to keep us hooked, and his memories of Joy Division's Ian Curtis are poignant." (Daily Mirror)

As a Steve Morris fan...

If the tone and cadence of the narrator is off, it can destroy the audiobook experience, but Steve’s narration, in his northwest of England accent, is spot on. His impressions of his family and acquaintances, and even of himself, had me howling.

I’d read Morris’ book earlier this year, and noticed how it isn’t the standard issue rock memoir. He does relate stories of agonizing recording sessions, stolen equipment, and the wrenching suicide of a friend. But it’s also an autobiography of so many of us kids of the mid to late 20th century: how we rode bikes, discovered music, and endured boring Sundays. It’s a catalog of nerdery: Airfix kits, synths, and drum machines.

And it’s all brilliantly joined together with understated humor, amiability, a dab of subversion, bits of wisdom, and MUSIC! Anecdotes and chapters are linked with instrumental and vocal vignettes.

To sum: get this book. It’s great.

I enjoyed this so much! Morris has the smiling voice and endearing accent of someone I would nominate to narrate almost anyting. As a big fan of Joy Division, and his drumming in particular I I knew this would be interesting material, but had no idea what an engaging and funny writer he would turn out to be, nor how gratifying his reading of the book would prove.

I found myself skipping over some of the early chapters about Steve's single-digit years growing up, they weren't so much what I was looking for, but as soon as he becomes a teenage rebel kid I was along for the ride and it just got better and better. it was also heartwarming to find out that the drummer behind one of the most brooding bands of the era is such a sweet guy.

Thanks for a great time Steve. And I honestly believe the BBC or the nature channel should start hiring you to narrate their flagship pieces. March of the Penguins II?

St Stephen’s Letters to the Mancunians

(Well actually I’m Scottish but I received the letter with gusto of a local lad)
This book is the apex of its class. I’m not saying it’s better than the Bible or put down your pen William Shakespeare. But everything in its place. As a biography of a musician this book reaches out to anyone who has been in a band. The inner thoughts and emotions are all wholly understood.
If you have never been in a band but grew up in the 70s or 80s then there is also the feel of these decades in the descriptions of every club, road, school or experience. It’s a jewel of a primary resource for future undergraduates to pluck opening lines to their social studies essay when discussing this era.
It is also read by the author. Let’s all take a second to think about that horrible feeling you felt when you heard Morrissey’s book being read by Neil Morrissey....
Stephen Morris reading his own work pushing the emphasis and accents on his own jokes, adding the intended emotions to each word.
As a suggestion I would say listen to Peter Hooks book first (also read by the author) Hooky’s story is a bit more polished a bit more guided to the audience. But this is why Stephen Morris’s book is exceptional. At first I was rolling my eyes because I hate autobiographies that talk about the first years of life (listen to I Partridge for a parody exposing why) BUT again, Stephen has reason and it is important to tell the story in this way to create a picture of a lad who grew up to be a mega star, but still a lad from Macclesfield.
I am going to listen to this a second time for sure. Maybe not straight away, I see he has a second volume coming out in January. I can’t wait,

Oh finally. And oh finally an audio book with a bit of music in it. And recordings of real conversations )the conversations were a bit hard to hear, but the drum fills speed up the heart rate and had me picking out any missing Joy Division New Order tracks missing from my collection before the book had ended.
Those chimes on atmosphere stand out alone as the sound of an era. Beautiful
Well done Stephen. Looking forward to the next one. You get an A+ from this teacher and a gold star, but I’m still reporting you for the cough syrup bottles and the red star of Belgrade.

Funny, insightful and warm storytelling.. I'm reminded of my own journeys, Joy Division the soundtrack..

Stephen always struck me as as the quiet one , in interviews, performances , etc but his storytelling and narration of his book was fantastic. I can’t wait for volume 2.