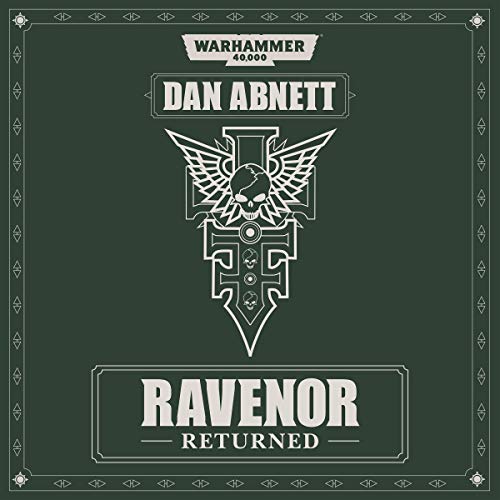 Inquisitor Gideon Ravenor and his retinue are believed dead, and with shadowy forces moving against them, they'd like to keep it that way. Returning to the planet Eustis Majoris, they go undercover, investigating a brutal ring of smugglers moving stolen arcane technology within the Imperium.

As they descend deeper into the organisation, it becomes clear that a terrible plot is unravelling. The ancient machines contain the unthinkable, and Ravenor must summon all of his wits to thwart the conspirators before the ultimate secrets of Chaos itself are laid bare!

Dan and Toby are a knockout team

Dan Abnett is slowly becoming one of my favorite authors, and with that, Toby Longworth is a perfect fit for everything he writes. Can't recommend these books enough.

enjoyed the series's. one of the best ways to start off in the warhammer universe. glad it's moving to audible from Black Library

What is there to say? Abnett towers over the Black Library like a Colossus. Everything about this series, much like his Eisenhorn trilogy, is top notch. If you are a 40k fan, I dont know that it gets better.

another great abnett novel. great narrator. great characters. would definitely recommend this to anyone who likes Warhammer 40k.

The stuff he knows

Thonius knows alot of stuff. Lots and lots of stuff. Good book, worth the credit.

Well worth your time

The book starts out rather chaotic, but the threads are rapidly assembled into a captivating and well told epic adventure. This is probably my favorite 40k book so far…
Toby Longworth reading pushed it even further. Fantastic listen. Highly recommended.

best one yet!!! Out of the three trilogies I’ve read them chronologically and after finishing this book it’s my favorite so far.

This os a worthy continuation of the saga. Dan Abnett did it again, I can barely wait for the 3rd and last book in the series.

Some of the best damn sci fi ever. If you like psychic phenomena, cyberpunk detectives, and bad guys summoning the forces of evil from other dimensions, and trying to take over the universe which ancient magic, buckle up!

Enjoyed it even more than the first book. Starting the third immediately.

This book can be summed up by fans with one line:The stuff I know.

great story, great writing - the greatest voice actor. as always a pleasure. the combination of Dan Abnetts books read by Toby Longworth is just a pleasure

the speaker gives you a complete W40k and Ravenor feeling. A distructive world in a great scfi universe and "skykers" as threat and heros realöy awesome.

by far the best series! such a well written group of books I hope to see more like them