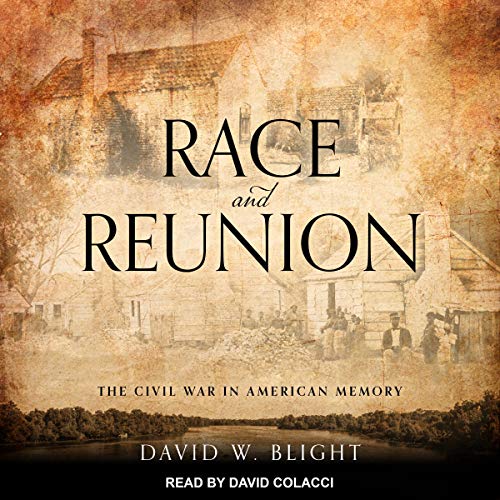 No historical event has left as deep an imprint on America's collective memory as the Civil War. In the war's aftermath, Americans had to embrace and cast off a traumatic past. David Blight explores the perilous path of remembering and forgetting, and reveals its tragic costs to race relations and America's national reunion.

In 1865, confronted with a ravaged landscape and a torn America, the North and South began a slow and painful process of reconciliation. The ensuing decades witnessed the triumph of a culture of reunion, which downplayed sectional division and emphasized the heroics of a battle between noble men of the Blue and the Gray. Nearly lost in national culture were the moral crusades over slavery that ignited the war, the presence and participation of African Americans throughout the war, and the promise of emancipation that emerged from the war. Race and Reunion is a history of how the unity of white America was purchased through the increasing segregation of black and white memory of the Civil War. Blight delves deeply into the shifting meanings of death and sacrifice, Reconstruction, the romanticized South of literature, soldiers' reminiscences of battle, the idea of the Lost Cause, and the ritual of Memorial Day. He resurrects the variety of African-American voices and memories of the war and the efforts to preserve the emancipationist legacy in the midst of a culture built on its denial.

Blight's sweeping narrative of triumph and tragedy, romance and realism, is a compelling tale of the politics of memory, of how a nation healed from civil war without justice. By the early 20th century, the problems of race and reunion were locked in mutual dependence, a painful legacy that continues to haunt us today.

How we remember matters

I first found out about David Blight when I was introduced to the podcast of his Yale History of the Civil War and Reconstruction class. Nearly 30 hours later, I was much more familiar with both Blight and the history around reconstruction and the Civil War. Last year I read his new big biography of Frederick Douglass, likely my favorite book I read last year. Since starting Race and Reunion, I also found out that Blight directs the Gilder Lehrman Center for the Study of Slavery, Resistance, and Abolition. The center has a podcast interviewing fellows of the center and Blight is involved in that podcast. I have been aware of Race and Reunion for several years. It is an expensive book, small release academic books usually are. But the book was released as an audiobook earlier this year and when I found it as an audiobook that was enough to make me pick it up. By the time I finished the introduction, I had also purchased the Kindle edition so I could alternate reading methods, and especially so I could highlight. I cannot better summarize his thesis better than Blight did: "Three overall visions of Civil War memory collided and combined over time: one, the reconciliationist vision, which took root in the process of dealing with the dead from so many battlefields, prisons, and hospitals and developed in many ways earlier than the history of Reconstruction has allowed us to believe; two, the white supremacist vision, which took many forms early, including terror and violence, locked arms with reconciliationists of many kinds, and by the turn of the century delivered the country a segregated memory of its Civil War on Southern terms; and three, the emancipationist vision, embodied in African Americans’ complex remembrance of their own freedom, in the politics of radical Reconstruction, and in conceptions of the war as the reinvention of the republic and the liberation of blacks to citizenship and Constitutional equality. In the end this is a story of how the forces of reconciliation overwhelmed the emancipationist vision in the national culture, how the inexorable drive for reunion both used and trumped race." Race and Reunion is more than just an exploration of how the Lost Cause mythology was developed, although that is included. It is also about how memory shapes the future and how choices are consciously and unconsciously made about what is worth remembering. Historians talk about ‘usable memory’, the idea that history is not just history, but something that can give meaning or understanding for a current era. I do not think that Blight coined that term, but Race and Reunion spends a lot of time exploring how usable memory worked at the end of the Civil War. Reunification was not quick, or neat. But in the end, the choice that seems to have been made was that it was more important for the country to be reunified for White Americans than for Black Americans to be integrated into the country and an accurate accounting of the reality of slavery to be dealt with. White Americans were willing to accept the White supremacist assumptions that were present both in the north and south, to repudiate the enforcement of the post Civil War constitutional amendments, and encourage ‘extraordinary’ Blacks to the extent that they did not upset the social order. Blight is an extraordinary writer. Not only is this academic history accessible (although long), it has real lyrical beauty. The quotes from the late 19th century and early 20th show a more florid writing style and I wonder if Blight’s own writing has been influenced by the style of that earlier age where he specializes. Regardless, Blight knows how to write. I could have highlighted much of the book. I did highlight 44 passages, many of them quite long because the context of them is so important to the understanding (you can look at them on my Goodreads page). Blight is not making a quick argument, the nuance is important. What is in the background of the history is what might have been. Not just at the time but today. Today we are living with long term implications of a country that has not had to honestly deal with its history and its culture of white supremacy. Toward the end of the book Blight talks about a short story that WEB DuBois wrote in 1912. “Modeled on Jonathan Swift’s story “A Modest Proposal,” Du Bois called his satire “A Mild Suggestion.” Similar to Johnson’s parable on the Pullman car, Du Bois placed five characters on the deck of a ship: a Little Old Lady, a Westerner, a Southerner, a New Yorker, and a Colored Man. They are discussing the “Negro Problem” within hearing of the Colored Man, and suggest the usual solutions of education, work, and emigration. Finally they ask the black man his opinion. He sits down and lays out his “perfect solution.” He urges rejection of education because it will only lead to “ambition, dissatisfaction and revolt,” scorns work because it can only foment job competition and the disruption of social circles, and refuses emigration because it is impractical. Instead, he proposes that on January 1, 1913…” The story goes on to suggest that the best way to solve the ‘Negro Problem’ is to just kill all Blacks. DuBois’ satire has been echoed since with a number of other thinkers. In many ways, that short parable (which I have not been able to find in complete text) does address the way that many continue to think about race in the US.

A pillar in refuting Lost Cause mythology

Narrator does an okay job. This book redefines the history of reunion, from Reconstruction to the eve of WW1. Blight successfully counters Lost Cause narratives on the origins and results of the Civil War. By concentrating on the three "schools" of reunion Blight shows how the reconciliationists and white supremacists merged to defeat the emancipationists, turning the rebirth of the nation into Jim Crow southern apartheid.

Understanding of US Today

Blight is brilliant in his research. He lifts the covers off of the Civil War and shows us the nuance and variation by which America’s memory of the war was shaped. Bonus: Helps offer a better understanding of who we are today. Which I feel is the primary goal of history.

I expected nothing less from David Blight. I have the book as well, so look forward to reading it.