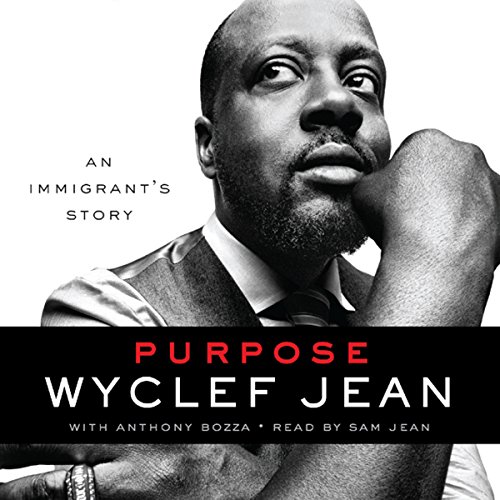 Wyclef Jean is one of the most influential voices in hip-hop. He rocketed to fame in the 1990s with the Fugees, whose multiplatinum album, The Score, would prove a landmark in music history, winning two Grammys and going on to become one of the best-selling hip-hop albums of all time. In Purpose, Wyclef recounts his path to fame from his impoverished childhood in "Baby Doc" Duvalier's Haiti and the mean streets of Brooklyn and Newark to the bright lights of the world stage.

The son of a pastor and grandson of a Vodou priest, Wyclef was born and raised in the slums of Haiti, moving with his family to New York when he was nine. He lived in Brooklyn's notorious Marlboro projects until his father, Gesner Jean, took them to Newark, where he converted a burnt-out funeral home into a house for his family and a church for his congregation. But life in New Jersey was no easier for Wyclef, who found it hard to shake his refugee status. Forced to act as a literal and cultural translator for his parents while still trying to master English himself, Wyclef soon learned that fitting in would be a constant struggle. He made his way by competing in "freestyle" rap battles, eventually becoming the best MC in his school. At the same time, Wyclef was singing in his father's choir and learning multiple instruments while also avidly exploring funk, rock, reggae, and jazz - an experience that would forever shape his sound. When Wyclef chose to pursue a career in music over attending theological school, Gesner, who hated rap, nearly disowned him, creating a gulf between father and son that would take nearly a decade to bridge.

Within a few short years, Wyclef would catapult to international renown with the Fugees. In Purpose he details for the first time ever the inside story of the group: their rise and fall, and his relationships with Pras and Lauryn Hill.

Wyclef also looks back with candor at the catastrophic earthquake that struck Haiti in 2010 and his efforts to help rebuild his homeland, including the controversy surrounding YÉle, his aid organization, and his exploratory bid for president of the island nation. The story revealed in Purpose is one of inspiration, full of drama and humor, told in compelling detail, about the incredible life of one of our most revered musical icons.

It was very interesting and very relevant to the struggle that remains to this day. he was truthful and honest.

I am amazed at this life story. And I will forever listen to The Score with differently now that I have read the making of that album. I was a fan of Wyclef Jean before reading the book but now I feel like I know more about him now that ever before. His story was so necessary and needed for the culture. I am also relieved that he has set the record straight but his and Lauren Hill’s relationship. His story is raw and gritty but I wouldn’t have wanted it any other way. Haiti should be proud of their native Wyclef Jean!!

I just see Wyclef as an artist who is proud to wear his Haitian flag everywhere. Now I understand what he has been through and how he makes it clear to people who listen to all of the negativities. I wish he reads his own book, but the narrator did a good job. I am touched by his sincerity.

Inspiring, Fugees fan a must listen

I have gained a new respect for Wyclef the man , artist and revolutionary. I understand why he made the mistakes he made . For the the Fans , ( The Fugees) this is part of the culture and every Hip Hop Head /lover should be required to listen to a legend like Wyclef life and background, you will not regret it. One Love !

loved it from start to finish. very good with fun stories and well learned lessons.

Would you consider the audio edition of Purpose to be better than the print version?

Yes the narrator was his brother so it sounded just as if he was telling the story.

I loved loved this book.... I can't imagine going through what he went through as a child. However I would have beat his butt too after all his parents sacraficed, he comes here and do the things he did...Try to kill his grandma oh my god I was stunned lol.. But his rise to fame was that of a man with AMBITION! I applaud him for that. His relationship with Lauren was the best part ever because everyone speculated back then but it wasn't a big story. Great book thanks for sharing

I really enjoyed this biography. The story was compelling and though it is obviously a little biased (there are two sides to every story) I finished the book liking Wyclef even more. If you grew up listening to the Fugees and Wyclef like I did you should definitely read this book. Sam's narration is an added benefit because it makes the reader feel like they are listening to Wyclef himself.

The man behind the man!

What made the experience of listening to Purpose the most enjoyable?

Learning more and more details about a person that gives you an in depth look into what created the artist. The fact of how Wyclef was shaped due to being left behind in Haiti without his parent. I had no idea about he and Lauren Hill's relationship. The explanation of why he chose his wife as his life mate, beautiful. Now I see why their will probably never be another Refuge's project. I'm so glad I purchased the book.

What other book might you compare Purpose to and why?

'The Measure of a Man,' Sidney Poitier and 'Callus on My Soul,' Dick Gregory

Too many to name. The book really opened my eyes to how Wyclef was shaped. I think I can say the scene of His father at Carnegie Hall when Wyclef directed the spotlight on him.

Wyclef, I love your book.

While Wyclef has had an interesting life, I couldn't help be a little disappointed with his biography. It felt cursory - he deals with his early life and the formation of the Fugees in great detail (particularly his relationship with Lauryn Hill), but the description of his personal life sounded superficial. While he mentions his kids and wife, they are often discussed only in the context of the Fugees. There's barely anything about his career after the Fugees. While I found this informative, I wonder how much is happening behind the scenes that wasn't discussed.

Would you consider the audio edition of Purpose to be better than the print version?

Being on my feet for 7 hours while i work and being a full time student, having the audio version of this book gave me an awesome way to listen to this book!!

What was one of the most memorable moments of Purpose?

My most memorable moment in the book Purpose was when wyclef's dad came to one of his shows for the first time and defined the word "Success". Due to the fact that he had a variety of race as fans at his show wyclef's was the word success.

favorite scene was wyclef rapping during lunch in high school with the golden mic.