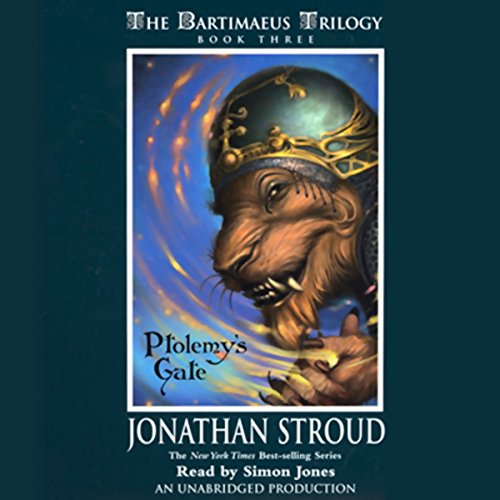 Three years after the events of The Golem's Eye, the young magician Nathaniel is an established member of the British Government.

But he faces unprecedented problems: foreign wars are going badly and Britain's enemies are mounting attacks close to London.

Increasingly distracted, he is treating Bartimaeus worse than ever: the long-suffering djinni is growing weak from too much time in this world, and his patience is at an end. Meanwhile, undercover in London, Kitty has been stealthily completing her research into magic and Bartimaeus' past. She hopes to break the endless cycle of conflict between djinn and humans, but will she be able to get anyone to listen?

Before any of these problems can be resolved, disaster strikes London from an unexpected source, and the destinies of Bartimaeus, Nathanial, and Kitty are thrown together once more. They have to face treacherous magicians, a long-fermented conspiracy, and an enemy from 'The Other Place' that threatens London and the world. Worst of all, they must somehow cope with each other.

I chose to listen to this trilogy for a Young Adult Literature class in my program of study. What a great way to log 45 hours of audio-listening pleasure! Simon Jones absolutely nails each character - Bartimaeus, most magnificently. I had no idea going into it that this wise-cracking demon would win my heart so easily. At times the story gets bogged in details, and I could never really tell what time period in which it took place, but the third book wrapped everything up nicely with a somewhat startling ending. I was truly sad when it was over.

In a word- enthralling. Absolutely enthralling. Despite my best efforts to the contrary, I was pulled in to and wrapped up in the story. Better by far than its predecessors, this last book in the trilogy is an exceptionally well-crafted book. Masterfully contrived, complimented by an equally skilled narrator, this is one of the most enjoyable books I have had the pleasure to listen to.

Loved it 3 times over!

Wow, what an ending! It was better than I expected! I am a 39 year old male that likes Neil Gaiman type books along with Dean Koontz and Stephen King, but this series was incredible and I am now a huge fan! Good from 9-109 years of age!

This trilogy has become one of my favorites! I loved the audiobooks and the narrator. I don't think anyone could have done Bartimaeus's personality better. I will say that the end of this series absolutly broke my heart! Well worth the money!

Great Right Up to the End

I have enjoyed this series especially the last two. I have to reiterate what another reviewer has said however... The end was more than just bad, it was terrible. I am never one fond of unhappy endings to begin with but I really felt jipped with this one. I had to rewind my Ipod several times because I was sure I was missing something. The end was too rushed and there was no sense of closure....A big disappointment. (Narrator was still wonderful however.)

Bartimaeus is back yet again and with a wit as sharp as ever. The personality of the characters in the story are further developed and by the time the story is over you truely feel a bond between yourself and the characters. With that, the emotional ending and the fantastic reading done by Simon Jones provide for a marvelous finish to a spectacular story.

This was a horrible ending to a story that I have given 5 stars to up till the last chapter of the last book. I can't believe that Mr. Stroud put us through this whole suspenseful trilogy to cut the story off the way he did.
The Kitty, Nathaniel, Bartemaus relationship needed far more developement. It ended as if the writer got tired of typing and needed a quick end. We're left wondering why he lead us in certain directions of thought when those directions were to never happen.
There's a difference between a true English tragedy and a hack ending. It seems obvious that he is lining us up for another trilogy, but Mr. Stroud should have left a clean ending to this trilogy if he is really intending it to be a trilogy... Perhaps leave one hanging thread for a future set of books, but not a thousand.
The last chapter left me wondering, "What was the whole point here?" and "Why have us follow someone's many adventures, thoughts and feelings for THREE WHOLE BOOKS to leave their story cut short?" There seems to be no point in continuing another trilogy.
On a positive note, I LOVE the portayal of Bartemaus by this narrator. The witty English sarcasm of Bartemaus really plays off in the narration.

I couldn't put it down.

Three years have passed since the events of The Golem's Eye. The young magician Nathaniel, AKA John Mandrake, is now an established member of the British government. Things have not been going well for Britain in that time, however. Faring badly in several foreign wars and plagued by unrest from within, the country is already on the verge of flying apart. Things only get worse, however, with the surfacing of a surprising threat dating even back to the events of Amulet of Samarkand. Once again Nathaniel is forced to call upon the Djinni Bartimaeus, already weakened from too much time spent on Earth and Nathaniel's generally ill treatment of him. Aided now by Kitty Jones, the young resistance member who aided Nathaniel in stopping the GOlem three years before and was believed dead since tat time, the two must work to unravel a seemingly insurmountable plot. Onthe one hand a few rogue magicians seek to topple the government and eestablish it with themselves at the top, while a few of the most powerful spirits from the Other Place seek to punish humanity for misusing their powers.
All in all an extremely rivetting book with a shocking climax. As usual, narrator Simon Jones is in perfect form and I look forward to getting my paws on the fourth volume in this series once finances permit me to renew my Audible membership.

Long and Worth it

I'm (more or less) an adult, but I love certain novels addressed primarily to children. This is a wonderful, complex, story with tremendous narrative, historical and moral ambition. All characters become increasingly compelling as the story moves forward, and your interest in the Ptolemy backstory grows almost urgent. It's hardwork though, and I'd guess children would need their parents to listen with them to judge when to break off for awhile-and to help explain with the historical aspects of the story.

Perhaps most important in an audio version, Simon Jones is a truly great reader. He gives all characters a definite personality without trying to intrude on the author's characterization. His pace and timing are truly wonderful. This would be a great road trip book for parents with clever little brats.

Not just for Kids

When I first downloaded this book, it was for the kids, but after the first few chapters, I found this trilogy delightful. Colorful characters - (Bartimaeus is my favorite) good story. Good story for family road trips - I couldn't help laughing. This one is great for when you need a break from the more intense, sometimes dark fantasy stories. Listen to the whole series, you will find yourself chuckling.

Really enjoying the Bartimaeus books, mostly listening to it on long drives through the Alberta countryside. Simon Jones is a great fit makes me laugh, gasp and feel for the characters

I love the bartimaeus books, they are not only a good read but also a great audio book. They can be read/heard at any age and personally I think that Simon Jones does a terrific job at interpreting them, giving each character its unique voice.LISTEN TO IT!!!

the audio stuttered at some times. otherwise a good experience. the narrator does a good job

Narrating was good but story is just sad in the end. Very strong development of The characters in The book but as I Said, too sad ending for me