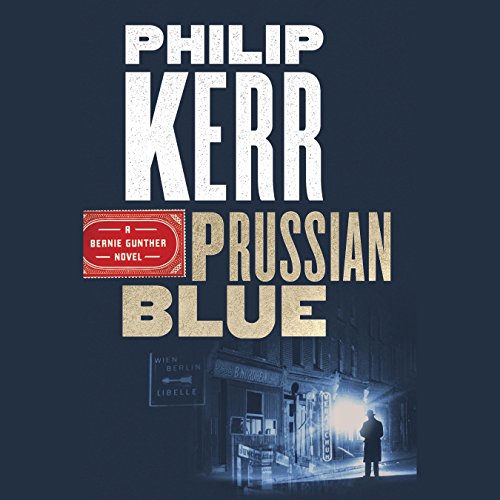 From New York Times best-selling author Philip Kerr, the much-anticipated return of Bernie Gunther, our compromised former Berlin bull and unwilling SS officer. With his cover blown, he is waiting for the next move in the cat-and-mouse game that, even a decade after Germany's defeat, continues to shadow his life.

The French Riviera, 1956: The invitation to dinner was not unexpected, though neither was it welcome. Erich Mielke, deputy head of the East German Stasi, has turned up in Nice, and he's not on holiday. An old and dangerous adversary, Mielke is calling in a debt. He intends that Bernie go to London and, with the vial of Thallium he now pushes across the table, poison a female agent they both have had dealings with.

But chance intervenes in the form of Friedrich Korsch, an old Kripo comrade now working for Stasi and probably there to make sure Bernie gets the job done. Bernie bolts for the German border. Traveling by night, holed up during the day, Bernie has plenty of downtime to recall the last time Korsch and he worked together.

The summer of 1939: At Hitler's mountaintop retreat in Obersalzberg, the body of a low-level bureaucrat has been found murdered. Bernie and Korsch are selected to run the case. They have one week to solve the murder - Hitler is due back then to celebrate his 50th birthday. Lucky Bernie: It's his reward for being Kripo's best homicide detective. He knows what a box he's in - millions have been spent to secure Obersalzberg. It would be a disaster if Hitler were to discover a shocking murder had been committed on the terrace of his own home. But the mountaintop is home to an elite Nazi community. It would be an even bigger disaster for Bernie if one of them was the murderer.

Two different eras: 1939 and 1956, 17 years apart. And yet not really apart, as the stunning climax will show when the two converge explosively.

"[B]risk and agile...Gunther is one of crime fiction’s most gratifyingly melancholy creations, and in Prussian Blue we watch him match wits with the officialdom of two Germanys, pre- and postwar." (The Washington Post)

"Bernie Gunther - sly, subversive, sardonic, and occasionally hilarious - is one of the greatest anti-heroes ever written, and as always he lights up this tough and unflinching novel. We're in good hands here." (Lee Child)

"Once again Kerr leads us through the facts of history and the vagaries of human nature. His Bernie Gunther thinks he’s seen it all. But he hasn’t, and luckily, neither have we." (Tom Hanks)

Bernie in the Brambles

More great adventures of Bernie the sarcastically cynical broken hero... Fascinating snapshot of a historical context, and delightful weaving of historical characters into the fabulous fiction... These books don't have to be read in order, you can appreciate the uniqueness of Bernie regardless of which book you pick up first... Murder, conspiracy, Nazis, Commies, twists and turns, and the inevitable near death experiences Bernie always finds himself somehow enduring and surviving... Witty and depressing simultaneously that's Bernie the Bull... Flows smoothly w/ the historical back and forth, and the narration is excellent... Fair warning, there is no such thing as a happy ending in a Bernie Gunther story, only varying degrees of survival...

One of the best Bernie hunter series!

I really enjoy the Bernie Gunter series, and this one is the best i have read to date. Excellent storyline, great narration by John Lee. In addition to good suspense, the character are well developed, and Bernie with his sharp Berliner humor has me laughing, at the same time this does not detract from the great depiction of Germany pre and pst Ww 2. Very absorbing!

it was satisfactory; I don't expect fairy-tale endings

Who would you have cast as narrator instead of John Lee?

not sure. I usually like John Lee but found his over-exaggerated archness tedious here

depends on the cast

Bernie Would Have Won

John Lee took some time hitting his stride in this one. Does he do Kerr's books about the English football club? I miss the idiosyncratic noir slang of the series opener, but plot and setting are solid here. My personal favorite of this series is the one with the Cuban Casino.

I love these books. If you are interested, I strongly recommend beginning at the beginning. This particular story might not grip a new listener, but the momentum of the series is far from spent. While not knocked over by this installment, I was excited to get it and will be excited for the next one.

The highlight of this series, to me anyway, has been the different historical settings that Bernie has found himself in. The setting in this one is great, Hitler's Lair in the mountains of SE Germany. I'd always heard and read about it but the author brings it to life like no other source has to me.

The Nazis were an extreme example of the bullies taking over. Those at the top of the regime were ruthless from the start, that's how they got to where they did. But I never really thought how the ruthlessness filtered down the chain of command. And, I'd never really thought about how the local Germans hated the Nazis for coming in and destroying their world, taking their property, killing them. It was a nasty existence.

So, Bernie gets sent to solve a murder that no one can know even happened. He has this ruthless crowd trying to derail him almost at every step. But, in typical Bernie fashion, he keeps surviving on his way to solving the crime.

it would have been ever so much better if the last hour and a half were included!

The trio of author, protagonist and narrator bring 2 completely separate plots together seamlessly as Bernie, again, miraculously survives certain death so that we can observe not just history, but it's aftermath. The author's ability to make Bernie almost superhuman, in a believable way, helps us to glimpse how one righteous man might make a difference in a world where man's inhumanity to man is front page news, when the righteous go unnoticed. But they do go on...creating some light in the darkness.

Philip Kerr successfully intertwines two narrative streams from 1939 and 1956 to please this fan.

A thoroughly exciting return to action by the German police commissar Bernie Guenther. It's got Nazis, Stasi, murders, brothers who hate each other, as well as the best narrator working today, John Lee.

The stories of Bernie Gunther are captivating. Kerr’s writing is engaging and his turn of phrase is unparalleled with the possible exception of James Lee Burke. I cannot imagine the hours of research he must have logged to bring German history to a new reality in his books. What a wonderful writer Kerr was…

A hugely entertaining angle on leaders of the 3rd Reich, with gives insights on the men behind the throne, and their evil doings. The speaker is perfect, too.