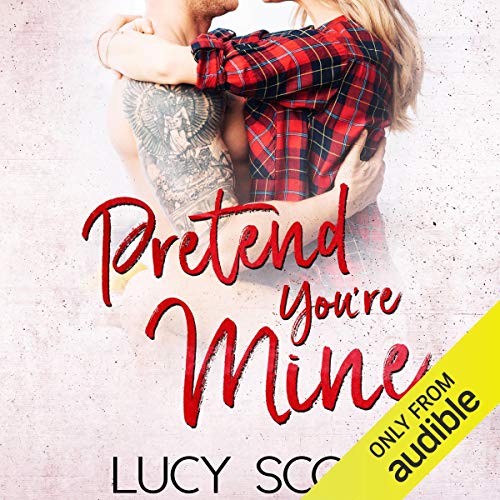 Luke Garrison is a hometown hero, a member of the National Guard ready to deploy again. Strong, sweet, and sexy, he doesn't have a girlfriend and doesn't want one. When the wildly beautiful Harper stumbles into his life, though, he realizes that she's the perfect decoy. A fake girlfriend to keep his family off his back until he's out on another mission.

So what if a single bite of her lip sends his mind to wicked places? He can control himself. Can't he?

Harper was on her way to starting a new life...again. But something about Luke makes her want to settle down in this small town and make Luke's house a home. When his arms wrap around her like steel, she finally knows what it's like to feel safe. Protected.

One night of sleeping in the same bed turns into something much, much more, and soon Luke can't keep his mind off Harper's wide gray eyes, or his hands off of her luscious curves. He never thought he'd feel this way about a woman again. But he knows that he can't tell her the truth about his dark past, and she can't reveal to him what she's running from.

Anyway, this isn't a real relationship. It's only for a month. Only pretend. Until it isn't....

Different from my expectations but good

I read the book when it first came out and I loved it. I was so sucked into the story and emotionally invested. Harper is so lovable and strong. She's the kind of person you would want to be friends with. I truly fell inlove with the character. Luke on the other hand was kind of a jerk. I felt really bad for him because he had lost so much but that was no excuse for his behavior. He was dead wrong in the way he handled the situation and how he treated Harper. Honestly, I think she could have done better. I also felt like Luke needed to work harder to make things right.

The audiobook didn't give me the same tone in which I read the book, but it was a good kind of different. Melissa bough humor, charm and a light hearted energy to her performance.

Ten Stars across the board!

This story was a barrel of emotions. Everything it promises. Words can't describe how well narrated it was and the story line about true love made it amazing. Definitely worth the credit, probably two.

This book was everything!

This book was everything! It pulled me in from the very beginning and held me captive throughout the entire book. I felt all the emotions from laughing to crying to anger to sadness and finally came the happily ever after.

Harper was a foster child that aged out of the system. She spent her life going from place to place and accidentally ends up in a small town called Benevolence because she ran out of gas while on the highway. She pulls into a parking lot of a domestic violence dispute and runs to defend the woman only to get knocked out. When she wakes up to the local town hero – her life changes.

Luke is the local town hero whose family is pushing him to date but he has a past that he doesn’t feel is worthy of a good future. He gets a glimpse of happy with Harper but then both of their pasts catch up to them in the worse way.

This book was SOO amazing! I’m so glad I got it. I’ve look it over time and time again and then bought it by accident. It was THE best book. The narrator was AMAZING as well. She did such a great job with all the voices and carried all the roles consistently.

I experienced so many emotions throughout this book. Loved it and hope there is more!

Best book I have listened to on a last two years! Lots of humor, some tears and overall great story, awesome narrator 😁

I can not get past # 3 chapters any reccommonations? I hAd ok fully download before!

loved it from beginning to end

I loved it. just wished we knew what Luke said to Harper's ex when he called. made me laugh and cry.

Best book I've read in a long while!

This book captivated me from the start! The characters have an incredible depth and are well written with detail and a raw emotional honesty. The author found perfection in the delicate balance of drama, love, struggle and sex. There isn't too much or too little of anything. And as if that's not enough -- add to it men in uniform and BOOM! It's a definite winner -- a book I would happily read over again!