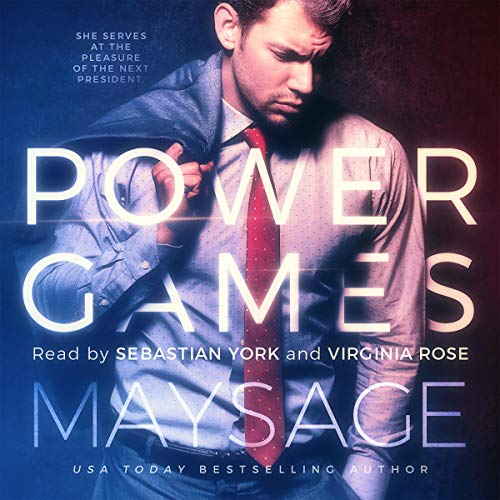 Yesterday, he had it all: a beautiful woman at his side, more money than he knew what to do with, and a real shot at the Oval Office. Today, he's a murderer. Yesterday, she was America's sweetheart: the wholesome first daughter of a beloved former president, a rising star without so much as a whisper of a scandal attached to her name. Today, she's an accomplice.

Vanessa doesn't know why these words flew out of her mouth when Charles is accused of murdering his wife in cold blood, but she's said them, and she isn't taking them back.

"He was with me all night."

Caution: Not Steamy! It's oh so hot!

Power Games by May Sage was wonderfully hot. Hot enough to keep yourself warm this holidays! Of course, true love does exist, we just really have to wait for the right person to bring out that passion.

I really loved. I have only read one other book from this author and it was a little bdsm, so I didn’t know what to expect. Reviewing authors other titles in the audible library, I was skeptical, but I like these narrators, the summary was up my ally, so I gave it a shot. No regrets. It was political, suspenseful, charming, sexy, and had a few twists and turns I wasn’t expecting. The way it was going I thought for sure we were headed for a ...to be continued, but to my delight was wrapped up in a nice HEA bow and some LOL humor. Narration was top notch per usual from these two narrators. I highly recommend.

Power Games. A hit right out the park.

If this is the author's first try then, please, keep 'am coming. one suggestion-keep the narrators, they were great!

This was my first from author May Sage.. it wasn’t what I expected and it turned out to be very different from my normal listen. It’s a very very slow build.. for seven years, Charles and Vanessa resisted the pull of their chemistry because Charles was married and had obligations. But, even though his marriage to a cheating lying manipulative wife is toxic, Charles doesn’t ended it for various reasons throughout the storyline. So, for seven years (and most of the book) these two ‘friend zoned’ each other even though they’d both fallen in undeclared love with each other.. until the night everything changes. Then the power games begin. There’s statements within silences, lies within bluffs, secrets and manipulations all making it a chessboard of moves with one goal.. The Whitehouse. But there’s also a murder to solve, a murderer to uncover and a snake in the grass to flush out.

So yes, this is very different from my usual listen where the alpha hero becomes possessive, single-minded and focusses on how he can get his girl.. instead Charles knows he can never have Vanessa, doesn’t try and focuses on his wife, his career and other things. There’s not much romance until near the end.. it’s just harmless banter, a close friendship by texts, email or phone calls and occasionally innocent rendezvous when they’re both in the same State. In the end they do heat up a few scenes but Vanessa keeps her vow to remain a virgin until her wedding night. Even though I didn’t love this book, the dual POV Duet narration where each keeps to their own gender’s voices by Sebastian and Virginia is what kept my interest, made conversations flow naturally and, for me, is what made this an enjoyable listen.

Worth a credit? Probably.. but I’m on the fence with this one for my own tastes regarding romance/storyline. It’s a well-written political journey, it’s a story of never crossing boundaries, it’s a whodunit in wicked world of enemies posing as friends and family, it’s a tale of manipulation and masterful moves and then it’s a epilogue of HEA’s.

This book was far from what I had expected when I read the blurb. I personally do not think the blurb fully described the book appropriately. I have loved the previous 2 May Sage audios that I have listened to and had assumed I would this one as well. I'm not saying the book is bad in anyway, just not something I would usually go with. It was far more political than I had anticipated and I felt there were too many details that had been left out and caused me to be very confused through too much of the book.

The narration was amazing. I loved the duet style that Sebastian York and Virginia Rose did!

Standalone Story - possibility of a follow-up

Standalone Story with the possibility of a follow-up.

Vanessa McNamara is the daughter of the beloved President of the United States. Charles Grant is a war hero who heads up Jacobs Enterprises, an organization that flips failing businesses. Nessie is determined to save herself for a husband, but Charles tempts her more than anyone ever has before. She falls for him the moment she sees him. Charles's marriage to Izzy is in name only, and he reluctantly takes lovers outside of their marriage. As the years go by, Charles and Vanessa strike up a friendship that turns into an obsession. When Charles is suspected of Izzy's murder, Vanessa immediately covers for him.

If you're looking for a romance that takes time to mature and a mystery that isn't as obvious as it seems, this is the book for you!

Author is new to me but I liked her writing style. I liked that the two gets to know one any another before anything happens. As for both narrators, I can listen to Sebastian all day and night. Virginia is new to me but she does her part very well.

Today, he's a murderer. Yesterday, she was America's sweetheart: the wholesome first daughter of a beloved former president, a rising star without so much as a whisper of a scandal attached to her name. Today, she's an accomplice.

What a read! Marvelous. Gorgeous. Breathtaking. This book was everything!

Loved every second of this deliciousness. The author really knows how to write a book, capture your attention and take your breath away.

The narrators were perfect. Amazingly perfect. Perfection. Like, that is all I can say because wow. They blew my mind!

This is my first audible book by May Sage and I can say , it will not be my last .
The story line kept me wanting to listen to the book straight through .The book has everything in it from love , scandal , and suspense . A great political thriller . The narrators Sebastian York and Virginia Rose did an amazing job ! Like how they narrated the book together . The audible book really felt more like a movie then a book .
I give the book 5 stars .

The performance was excellent and what you'd expect from Sebastian York and Virginia Rose. But the story itself felt a bit drawn out even tough this book is just a little over 6 hours. This might have been because the story spans over several years.

But my main gripe with this book is that it didn't go in deep enough. There was just a lot of telling, and as the reader I was just an outside observer. The narrative did not draw me in or gave me the feels. A lot of the initial action was off the page and told in the narrative. So as the reader/listener it left me on the outside of the story.