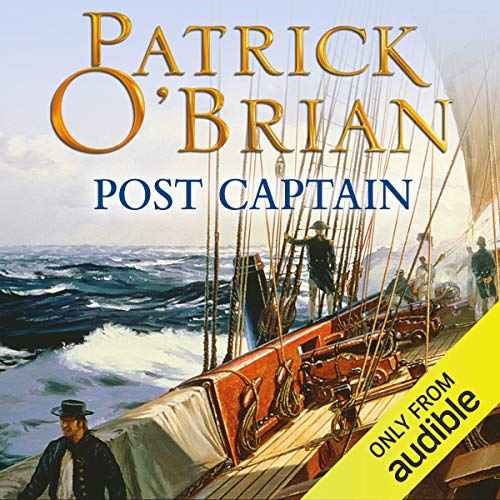 This tale begins with Jack Aubrey arriving home from his exploits in the Mediterranean to find England at peace following the Treaty of Amiens. He and his friend Stephen Maturin, surgeon and secret agent, begin to live the lives of country gentlemen, hunting, entertaining, and enjoying amorous adventures. Their comfortable existence, however, is cut short when Jack is overnight reduced to a pauper with enough debts to keep him in prison for life. He flees to the continent to seek refuge. Instead he finds himself a hunted fugitive as Napoleon has ordered the internment of all Englishmen in France.

Patrick O'Brian is regarded by many as the greatest historical novelist of the 20th century. Post Captain is the second novel in his remarkable Aubrey/Maturin series.

I could not buy these books abridged - half the pleasure is in the recreation of the language of the Georgian navy and the ebbing and flowing of the friendship of the two main characters is a subtle thing.

Ric Jerrom does a fantastic job of narrating and I will wait for the rest of his recordings of the series rather than switching to one of the other versions.

So good that I couldn't wait until my next credits arrived and had to purchase - the first time I have done this!

Jack Caught by the Lee on the Austen-esque Land

For much of Post Captain (1972), the second novel in Patrick O'Brian's Aubrey-Maturin naval saga set during the age of sail and Napoleon, Jack Aubrey is "brought by the lee," stuck in a difficult and uncomfortable position. Still waiting for his promotion to Post Captain and his prize money to come through after the climax of Master and Commander (1970), Jack has barely set up housekeeping with his good friend Stephen Maturin (medical doctor, avid naturalist, and secret agent) in a rented mansion in the Sussex countryside near a family of marriageable young ladies, when Jack receives crushing news: his promotion will never be granted by the inimical guy in charge of the admiralty, his prize agent has absconded with all of his prize money, and two of his prize ships have been declared upon appeal to have been neutral and hence out of bounds, so that Jack is left broke and in debt for 11,000 pounds. This seems to put the kibosh on Jack's hopes for the beautiful and reticent Sophia Williams and sends him illicitly into the arms of her beautiful and lively widowed cousin Diana Villiers, with whom Stephen has, despite himself, fallen in love. All this threatens the "bromance" of the two friends, as Stephen discovers the strange power of jealousy. Things are complicated further when, in order to avoid being arrested for debt on land, Jack begs for and receives a modest commission in the Polychrest, a notoriously ungainly and poorly built experimental ship.

One neat thing about Post Captain is seeing how out of his element Jack is ashore. At sea he is a decisive and commanding man--"Lucky Jack Aubrey"--but on land everything is complex and ambiguous and he gets caught up in a destructive relationship and is reduced to skulking around in a large cloak to avoid the bailiff's men. Another enjoyable thing about the book is O'Brian's surprising of our expectations. Whereas the first novel opens with Jack being promoted to Master and Commander, this novel (despite its title) progresses longer and longer with Jack's hopes for promotion retreating farther and farther. Still more, O'Brian introduces into his naval war story an element of Austen-esque comedy of manners featuring beautiful marriageable young women, handsome and eligible officers, domineering and vulgar mothers, lively balls, embarrassing scandals, malicious gossip, and even trips to Bath. Of course, exciting scenes of naval warfare punctuate the novel (though if you prefer books of non-stop page-turning naval action, you might do better elsewhere.)

Throughout, the main point of view character is Stephen Maturin, an intelligent, learned, honest, and compassionate, man whose journal is a pleasure to read as he analyzes such things as his feelings, Jack's character, the nature of thought, the power of smell, the virtue of independence, and the grim fact that "Life is a long disease with only one termination and its last years are appalling." The developing relationship between Stephen and Jack is compelling because they are so different in so many ways but (usually) love each other and enjoy each other's company so much.

There is plenty of interesting historical detail in the novel, like the tactics for evading arrest for debt, the political back and forth between Whig and Tory parties, and of course everything to do with sailing and fighting in the age of sail (though perhaps the nautical details are less copious than in the first book).

The novel is often very funny, too, from grotesqueries like Jack's dancing bear disguise and his attempt to make his ship's cabin fit for a lady by turning it into something that "resembled a cross between a brothel and an undertaker's parlour," to witticisms, like Stephen's explanation for why a dog watch is called a dog watch, and comedy relief scenes, like Stephen bringing a colony of 60,000 bees aboard a ship.

There are also many moving lines in the novel, like the following:

"Come brother," Stephen said in his ear, very much like a dream. "You must come below. Here there is too much blood."

"Can you create a unicorn by longing?"

"There was a long, even swell from the south and a surface ripple that came lipping along her weather bow, sometimes sending a little shower of spray aft across the waist, with momentary rainbows in it."

The only flaw might be that Post Captain at times feels like a section of a longer work, and I suspect that all 20 Aubrey-Maturin books may make a composite novel, so that in the end of this one things feel a little hurried and unfinished. There are some characters I'm left hoping will be developed in future books, like Scriven, the louse-ridden, malnourished, hack-translator who tries to make Jack stand and deliver in a park and is then taken in by Stephen, but who then disappears from the story. Anyway, the high quality and interest of the writing, plot, and characters make me want to go on to the next book in the series.

Ric Jerrom gives another inspired and flawless reading of O'Brian's flowing and concise prose and strong characters. His voice has become that of Jack (good-natured, bluff, and British) and Stephen (thoughtful, kind, and Irish) so much that from now on I'll only order books in the series read by him. And his many minor characters, from rough sailors to upper class maidens, are all spot on. And he increases the excitement and suspense of every action scenes. When you think that this audiobook is available for only $3.43, you should give it a try.

the bear scene almost ruins the whole series. instead of 'jumping the shark' it should be called 'wearing the bear'

This being my first reading of the A.M. series, I was no less impressed by the 2nd than the 1st. Less light-hearted than Master and Commander, O'Brian's Post Captain guides the reader through Aubrey's struggle to obtain, then hold a commission aboard the unwieldy Polycrest (and her near-mutinous crew). O'Brian takes some effort to flesh out Maturin's character, indicating that someone far more complex lies beneath the surgeon-naturalist persona. Simultaneously, he develops the doctor's sometimes-troubled relationship with Captain Aubrey, and the love-triangle that seems sure to ensnare them.

The first 30% is boring. Nothing happens. But once it gets going it is great and reaches a crashing climax. I'm hoping it was worth it to get into the subsequent books.

This is a rather slow moving second installment of the Aubrey-Maturin series. the best parts really are the sea battles.

'nothing quite so much fun as messing about in..'

I love the detail about the Tall Ships and life on the sea.

Now that Ric Jerrom appears to be recording the rest in the series I am really looking forward to following the adventures of Aubrey and Maturin.

It seems Patrick O'Brian was a spy himself and that does make these stories that much more interesting.
I suppose great exploits of sneaking into ports, sinking enemy ships, fighting off boarding parties, putting down mutanies, losing one's fortune and without too much of mushy romance even falling in love may seem a bit slow.

Good fun listening for the younger and older alike.

Slower than the first book

If you could sum up Post Captain in three words, what would they be?

Anything on the sea, interesting, the social dilemnas, not so much

Have you listened to any of Ric Jerrom’s other performances before? How does this one compare?