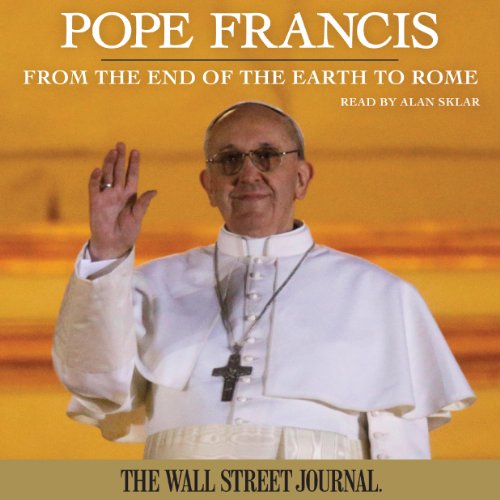 From the End of the Earth to Rome
De : The Staff of The Wall Street Journal
Lu par : Alan Sklar
Durée : 4 h et 30 min
Catégories : Biographies et mémoires, Religion
1 out of 5 stars 1,0 (1 notation)

On March 13, the cardinals of the Catholic Church, gathered to elect a successor to a living Pope for the first time in 600 years, announced a dramatic shift. By elevating Cardinal Jorge Mario Bergoglio of Argentina to become Pope Francis the 266th Pontiff, the cardinals were naming the first-ever Pope from the growing New World to take the helm of the church at a crucial moment.

It was a stunning move by a 2,000-year-old institution that has immense influence - with 1.2 billion adherents worldwide - and huge problems, including a decade-old sex-abuse scandal that has shattered faith in the institution, a shortage of priests, and secular trends that have drained the church of members and challenged its relevancy in a changing world.

From the shocking decision by Pope Benedict XVI to retire, to the introduction of Pope Francis, from the back streets of Buenos Aires to the front row at St. Peter's Square, reporters from The Wall Street Journal have chronicled these dramatic weeks in the life of the oldest institution in the world. Now, in a new audiobook, Journal reporters present a detailed, timely, and original biography of the new Pope Francis, as well as new insight on the bargaining and drama that surrounded his rise. Pope Francis presents the full, in-depth story of the church's change in direction and the man charged with leading it, and consider how Pope Francis might address the years of scandal and shortcomings while leading Catholics worldwide toward a deeper faith.