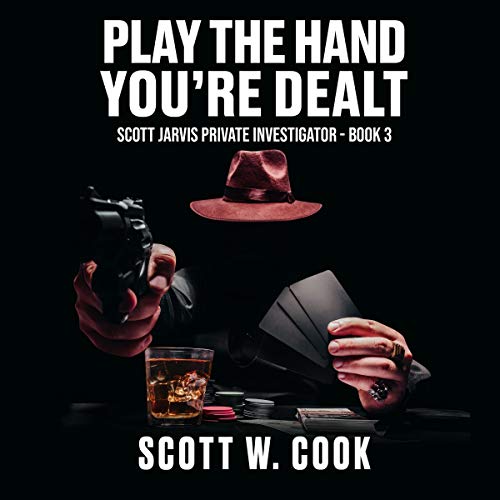 Play the Hand You're Dealt

When the stakes are high and every move could spell disaster, you’ve only got your guts to guide you...and no matter what cards you hold, it’s how you play the game that truly counts...

Play your hand right, and you score big....

Play it wrong, and it’ll be your last!

Scott and Lisa are enjoying their first cruise on the new sailboat when a call from a potential client interrupts their weekend in Saint Petersburg. Lionel Argus is the owner of Destiny Cruises, a successful Florida-based gambling cruise line. He’s been receiving racial threats against his life, and he needs private investigator Scott Jarvis to find out who’s behind it and stop them before things spiral out of control and Argus’ business and lives are destroyed!

As Jarvis begins to scratch at the surface of his latest mystery, the more he learns, and the more he uncovers a plot that grows ever larger and more complex. It soon becomes apparent that both organized crime and the FBI have an interest in Argus, yet in a way that Jarvis wouldn’t have expected...and someone from his past appears and turns his entire world on a razor’s edge.

Lies, intrigue, kidnapping, attempted murder, and gun battles mark the path toward the solution or complete destruction. Jarvis must fit the pieces of the puzzle together before he, Lisa, and Argus are swallowed in a deadly game with no second chances.

A plot-twisting romp that takes you from Orlando to both of Florida's coasts!

I read this book out of order and wasn't sure how that would work. Well, let me tell you it works! Another fun story and great storytelling by Mr. Cook! From start to finish I was captivated and couldn't wait to see what would happen next. I definitely recommend this one! Enjoy!

It's hard to tell which narrator is my favorite - Lee or Dave. They both do a great job of bringing these books to life. Love the intricacy of this book and the surprise inside too! Definitely recommend it.