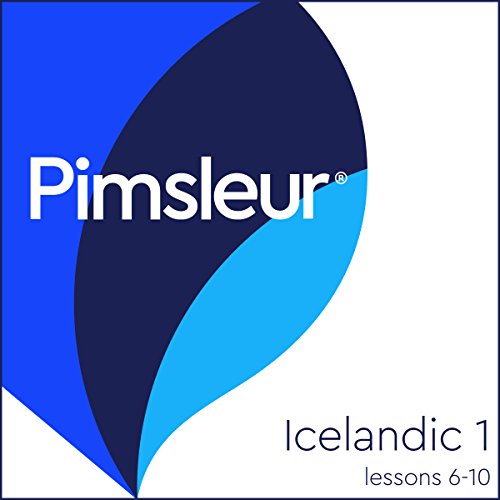 The Pimsleur® Method: the easiest, fastest way to learn a new language. Completely portable, easily downloadable, and lots of fun. You'll be speaking and understanding in no time flat!

This course includes lessons 6 through 10 from the Icelandic level 1 program, featuring 2.5 hours of language instruction. Each lesson provides 30 minutes of spoken language practice, with an introductory conversation and new vocabulary and structures. Detailed instructions enable you to understand and participate in the conversation. Practice for vocabulary introduced in previous lessons is included in each lesson. The emphasis is on pronunciation and comprehension and on learning to speak Icelandic.

Icelandic, the official language of Iceland, is spoken by the island nation's entire population of just over 330,000. In addition, approximately 8,000 speakers live in Denmark and 6,500 in North America. Descended from Old Norse, Icelandic is one of the Nordic languages belonging to a subgroup of Northern Germanic languages that also includes Norwegian and Faroese (spoken in the remote Faroe Islands off the coast of Denmark). The insular Icelandic language has not changed significantly since the Middle Ages and is considered a part of the country's national identity.

The government's Icelandic Language Committee, charged with maintaining linguistic purism, keeps foreign words from influencing the language by coining new terms (usually constructed by combining old words) to describe modern concepts. For example, the word computer did not exist in Icelandic, so a new word, tölva, was created. Tölva is a combination of two existing words, tala (number) and völva (a prophetess or magical seer), so it means, literally, "number prophet".

I’m Learning So Much!

Best language instruction I’ve ever used by far!!!! It really makes you feel fluent in every lesson.