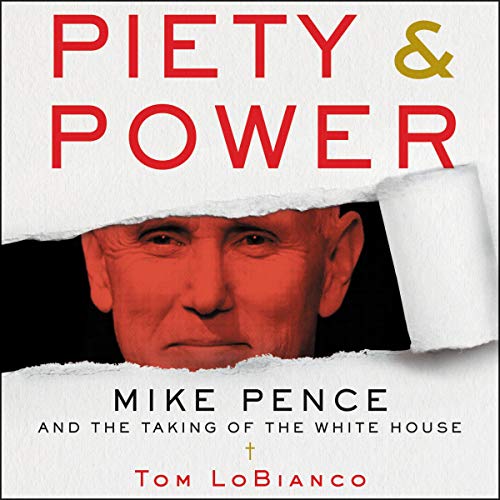 A revealing, in-depth biography of Mike Pence, the most secretive and ingratiating vice president in modern history, from a reporter with remarkable access.

No journalist has covered Mike Pence for as long or as closely as Tom LoBianco. The seasoned political reporter was at the first campaign rally governor Pence held in his hometown of Columbus, Indiana. He was there when Pence returned to Washington as Donald Trump’s vice president. Drawing on his deep ties both within the Beltway and in Indiana state politics, as well as reams of research and deep access to the vice president and his staff, LoBianco offers a revealing portrait of the devout Christian who shocked many of his closest followers when he joined the campaign and became one of the strongest champions of Donald Trump. He also explores the rumors - much debated inside the Beltway and among pundits in the media - surrounding the vice president’s ambitions to succeed and even "overthrow" Trump.

LoBianco dissects Pence’s entire political life, from his detours in the ’90s, to his rapid ascension through the first decade of the 21st century, to the White House, and provides an inside account of how Pence nearly crashed and burned his career while governor, only to miraculously rise from the ashes thanks to the unlikely election of Trump. He also gives a rare look inside the "shadow government" Pence has built - a conservative machine at Trump’s call for now, but one that could just as easily step in if Trump is removed from office.

Piety & Power cuts to the core of the nation’s most enigmatic politician and unearths new, important, and fascinating anecdotes about Pence’s faith, his marriage to Karen Pence, his bizarre, obsequious relationship with Trump, his deeply buried personality, his ascent to power under John Boehner, and his presidential aspirations and plans for America’s future.

From the explosive revelations of the Russia investigation to the sea change affecting the Republican party and its direction under Trump, it is vital that Americans know more about the man who could ascend to the Oval Office. Piety & Power provides insights and answers as it sheds light on this ambitious Midwestern politician, his past, and his possible future.

Scary he's so close to the top job

Want to make of clear at the outset that I dislike Mike Pence. Heading into the book, I felt he was a hypocrite who would say anything to become president. The book confirmed this, but is not a hatchet job, nothing about it is "gotcha!" material.

First part was slightly tedious, though necessary to give a background. What stood out for me was the desperation to acquire money, as portrayed in his failed Congressional bid where he cleverly Incorporated the campaign so that he could legally, if not ethically, divert funds to himself to pay his personal bills. Donors weren't happy when they found out, but he replied that as a full-time candidate, he "deserved" a salary. This issue resurfaces later when money is diverted from the inauguration funds to the vice president's discretion, after Karen complains that they don't have enough money to live a DC lifestyle.

Ask for his relationship with Trump, the best way I could put it is that I came away feeling it's a classic love-hate deal. If Trump is somehow taken down, I would fully expect him to lash out at Pence on the way out. Conversely, if I were Trump I would not absolutely count on any sort of a pardon from Pence as a guarantee.

I inferred that the author's point was that perhaps Pence would mellow a bit in his hardcore social stands to adapt to current popular views. I'm not so sure of this myself. It was mentioned that in considering him for vice president, the Trump campaign was more concerned about his wife. It's fairly clear that if he were president, she would be calling the shots to at least some extent. Ugh!

This biography, written by a journalist who has covered Mike Pence since he was running for office in Indiana, offers details and perspectives from Pence’s political career (so far). LoBianco discusses Pence’s wife Karen, his evangelical Christianity, and his political ambition have shaped his policies, his campaigns, and his behavior in various situations. There are no bombshells here, but there are behind-the-scenes looks at many events that offer a new perspective about how Pence has tried to manipulate or obfuscate journalists and how lesser known factors played a role in various events and scandals. Pence often states, “I’m a Christian, a conservative, and a Republican–in that order.” After reading this book, I would say that his behavior is influenced by his ambition, his ego, and the people with whom he surrounds himself–in that order. This man is a heartbeat–or a Senate trial verdict–away from the Presidency, so it is worth reading this book to get a better understanding of how the man got where he is and what he might do if he becomes President.

Struggling to Finish! Don't waste your money. it did assure me though that Pence is AWFUL

If trump is impeached we get pence. You should know what he is about. It should give you concern