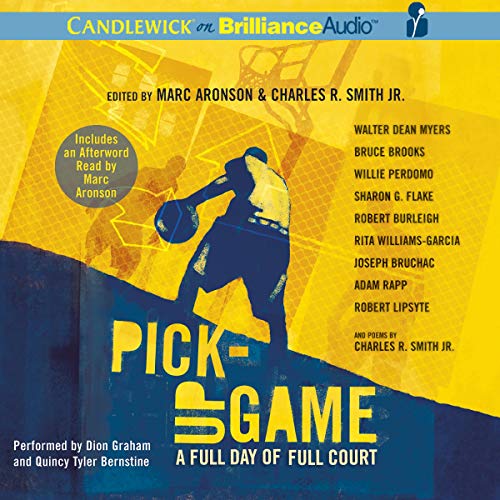 Nine of young-adult literature’s top writers reveal how it all goes down in this searing novel in short stories that each ingeniously pick up where the last one ends. Characters weave in and out of narratives, perspectives change, and emotions play out for a fluid and fast-paced ode to the game. Crackling with humor, grit, and streetball philosophy, and featuring poems by Charles R. Smith Jr., this anthology is a slam dunk. Who’s got next? One day. One court. Ten voices.

We listened to this collection of short stories on a family road trip (mom, dad, boys 15 and 12). We all adored the first few stories, but then they got a little spotty. The performances were all wonderful--each speaker had his/her own voice, which was great. We just wish the whole collection had been as strong as the first few stories.The structure is interesting--it takes place on a basketball court in NYC and follows the players and observers and their lives. But, just like in the game, some of the players go home, and so you don't hear from them again, even if you really want to know more about them.