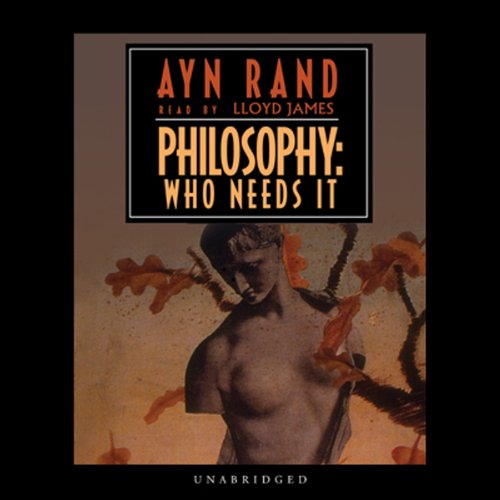 This collection of essays was the last work planned by Ayn Rand before her death in 1982. In it, she summarizes her view of philosophy and deals with a broad spectrum of topics. According to Ayn Rand, the choice we make is not whether to have a philosophy, but which one to have: a rational, conscious, and therefore practical one, or a contradictory, unidentified, and ultimately lethal one.

Written with all the clarity and eloquence that have placed Ayn Rand's objectivist philosophy in the mainstream of American thought, these essays range over such basic issues as education, morality, censorship, and inflation to prove that philosophy is the fundamental force in all our lives.

"For those who want to understand the philosophic implications of our era, this collection by Ayn Rand is an excellent place to begin." ( News-Leader)
"Although this omnibus volume...is written for an audience of believers, readers unfamiliar with [Rand's] novels might find it a useful starting point." ( Publishers Weekly)

This is not light listening. It is best on long trips, as it is difficult to follow some of the deeper arguments if you take it in 20-minute commute segments. It is a great book, actually a collection of essays, but like any philosophy it takes some thinking to follow. Though I cannot say I subscribe to Ms. Rand's views on all things the clearness of her arguments are difficult to refute. Ms. Rand is pretty rough on both the right and the left and points out the hypocrisy in both positions. If you are not willing to examine your political beliefs then stay away as they will be challenged. Finally it should be noted that most of these essays were made in the late 60s and early 70s. Ms. Rand promotes that America is great because of its beliefs, but that it is vulnerable because it does not understand the premises behind those beliefs. I suspect she would look at America today as an opportunity for greatness lost.

This is an excellent book. I just bought it in hard copy as well so that I can read it. Very deep and thought provoking in a way that is constructive. Too often, philosophy is about trying to put together disintegrated units which out of context make absolutely no sense and contradict themselves. This book is for people who want to apply philosophy to the real world, the world of our senses (which is all we really have in the end anyways), and to this life in an integrated fashion for the purpose of actually learning something useful.

This is truly a timeless as well as a timely book. Really applicable for the changes that the world is going through today. A highly recommended listen.

I believe that this is the 4th Ayn Rand book a person should read/hear. 1st is Atlas Shrugged, likely the most important book ever written. Next Capitalism-The Unknown Ideal and The Virtue of Selfish can be read in either order, but Ms Rand does reference the latter in the Capitalism.

I believe that if enough people read all 4 this country could still reach its incredible potential.

It's clear from the numerous out-of-place pauses, badly pronounced words and expressions and in some cases words changed (!) that the narrator has not taken the time to read and understand the material first. Compared to the (few) other books I've listened to this narration is barely acceptable.
Still, this is a book everyone should read or listen to, given how many great and important ideas it contains.

Excellent in-depth introduction to Ayn Rand's philosophy of Objectivism. Objectivism may be simplified as the opposite of subjectivism. Subjectivism is the view that all values, norms, standards, criteria, principles, judgments, perceptions, facts, explanations, reasonings, and cognitions and evaluations of any kind lack any validity, truth, or objective grounding in any fixed, stable reality existing outside our minds, but instead only appear as if they do because they are projections of our preferences, emotions, motives, biases, dispositions, psychological tendencies, and other subjective, contingent factors about our psychological make-up. Two major forms of subjectivism are individual relativism and group relativism. Individual relativism says that all such matter are relative to the individual, whose preferences, etc. set his or her own standards. Group relativism holds that group preferences, etc. set the standards for the group. What is true for you is not true for me, says the individual relativist. What is true for them is not true for us, say the group relativists. Both imply that there is no truth. By contrast, Objectivism acknowledges that subjective phenomena exist at both the individual and group levels, and that either can taint our understanding of reality, but that there does exist a mind-independent reality with a fixed nature, fixed, identifiable, perceivable characteristics, and that reality serves as the basis for determining whether our judgments about it are correct or not. If our claims correspond to reality, they are true; otherwise not. The claim that "this is a review of an Ayn Rand book" is true because it is a review of an Ayn Rand book, not merely because I think it is. This is Rand's metaphysics (her theory about the nature of reality), the basis for her Objectivism.

From this follows her epistemology, ethics, politics, economics, and aesthetics. Epistemology, the study of the nature of knowledge, that is in line with Objectivist metaphysics has it that because there is a fixed reality, we can know it by means of perception and reasoning. We perceive real objects, forming concepts that categorize them, such as "book review" or "word" or "person", and reason about what kinds of things they are, based on identification of their natures, what makes them what they are, which can be crystallized in definitions, e.g., a book review is a (typically written) evaluation of a book by a reader of that book. We can know what book reviews are because they exist in mind-independent reality, so we can check reality to see if it contains a book review, what a book review is, and what it is not, and whether a given piece of writing counts as a book review. Thus, Objectivist epistemology has it that we can attain knowledge by use of perception, conception, and reasoning.

Objectivist ethics follows suit, identifying what ethics is, based on what man is, a rational self-interested, autonomous (free-will-possessing, volitional) being, and thus man's interests in life and happiness determine that whatever is in man's interests, whatever supports his life and his happiness, is the good for man. Man, like any living being, needs certain things in order to survive, but unlike most other beings, man must use his reason to produce the goods he needs to survive. Thus, man ought to be productive, and, given his right to life and to the pursuit of happiness, nobody has a right to enslave another man or use force or the threat of force to make him produce for another. Individual freedom for every man follows from the right to life and the right to the pursuit of happiness, and demands that nobody use force against another except in self defense. Thus, altruism cannot be forced on anyone, although anyone may choose to help another, and it is rational to do so if doing so is in one's self-interest. Thus, Objectivist ethics is an ethics of rational self-interest, not altruism.

Objectivist ethics, being an ethic of rational self-interest, determines Objectivist politics, economics, and aesthetics. Given individual rights to life and the pursuit of happiness, the only just political system is one that imposes no altruistic obligations on anyone against their will, and thus demands respect for individual rights, liberty, and all the freedoms that this entails, such as freedom of speech, association, the press, to own property, to exchange values, goods, and services voluntarily, etc. Thus, capitalism is the only economic system that is politically just. Government has no right to interfere with the rights of autonomous individuals engaged in free exchange according to their mutual rational self-interest. The only legitimate role for government in an Objectivist society would be that of security, securing the rights of free individuals. This means that a just government would be restricted primarily to a militia to protect the society from external aggression, a police force to protect citizens from each other, and a judicial system to adjudicate putative violations of individual rights.

Lastly, Objectivist aesthetics acknowledges the nature of man as a rational, autonomous, self-interested volitional being, and places a high value on man;'s freedom, his free will, his nature as an end unto himself, as a being that values himself for his own sake, and encourages art in any form that emphasizes or is at least consistent with that reality, particularly aspirational art, art that depicts what man can and ought to be, not just what man is or has been, although while Objectivist art is aspirational and thus imaginative and not limited to reality or representation in art, it acknowledges the importance of the relationship between cognition of reality, which is representational, and aspiration for a better future, which is non-representational, imaginative, creative, and productive. These values are emphasized in the Fountainhead, Rand's work on architecture in which the ideal man is depicted as eschewing the copy-cat tradition of placing Greco-Roman facades on municipal buildings, which is unoriginal and uncreative, while championing a kind of architecture that fuses creative design (what could be) with structural necessity (what is), producing beautiful buildings that reflect the aspirational ethic of striving to produce the best in man.

Having read the Fountainhead and Atlas Shrugged, Rand's two feats of genius, helped me have a sense for this philosophy, but this collection of her explanatory essays, Philosophy: Who Needs It, enabled me to understand Objectivism enough to write this review. The above are summaries of those of her views that define Objectivism. The book argues, for, defends, and explains these views in forceful, insightful, often humorous, often polemical terms. If anything, it is a refreshingly coherent philosophy, with every component logically entailed by, and entailing, every other component, which is exceedingly rare among philosophical systems. Anyone who wishes to criticize Rand, which is becoming a renewed past-time among intellectuals on the left of late, cannot coherently do so without understanding her position. To understand it, I highly recommend this collection.

A necessity for all men to read

If you are not familiar with Ayn Rand, I suggest you start with this book. It is a great overview of her ideas, and is absolutely true in stating the need of philosophy for all men. Happy reading!

This was well worth the money. I recommend this one for anyone, like me talking to my sister for instance, that has trouble explaining the appeal of philosophy. It is really practical to guide your daily choices in the context of real world issues and comes across rationally and without pretention of authority. Very much my cup of tea!

America has fallen because we ignored history.

I am not sure I am truly one to review this book. I wish I had learned more when I was younger. but I am attempting to make up for that and remove my ignorance.

A must read so relevant

Amazes me every time I listen or read Rand she sees into the future.
This work has could have been written yesterday. Yet it's almost 40 years old.
The narrator has a pleasant voice and is easy to listen to.
excellent overall

loved in everything she has written is such a thought provoking listen. I wish they would have taught this subject in school when I was there.