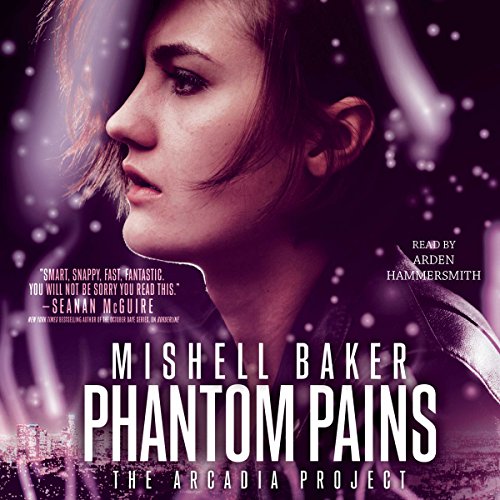 In this sequel to the Nebula Award-nominated and Tiptree Award Honor Book that New York Times best-selling author Seanan McGuire called "exciting, inventive, and brilliantly plotted", Millie unwillingly returns to the Arcadia Project when an impossible and deadly situation pulls her back in.

Four months ago Millie left the Arcadia Project after losing her partner, Teo, to the lethal magic of an Unseelie fey countess. Now, in a final visit to the scene of the crime, Millie and her former boss, Caryl, encounter Teo's tormented ghost. But there's one problem: According to Caryl, ghosts don't exist.

Millie has a new life, a stressful job, and no time to get pulled back into the Project, but she agrees to tell her side of the ghost story to the agents from the Project's national headquarters. During her visit, though, tragedy strikes when one of the agents is gruesomely murdered in a way only Caryl could have achieved. Millie knows Caryl is innocent, but the only way to save her from the Project's severe off-the-books justice is to find the mysterious culprits that can be seen only when they want to be seen. Millie must solve the mystery not only to save Caryl but also to foil an insidious, arcane terrorist plot that would leave two worlds in ruins.

Maybe not quite as excellent as the first in the series, but still a really entertaining and strong book. Lots of intrigue and machinations going on here, as well as fey court politics and Arcadia project politics. The plot thickens. Looking forward to book three. I would not recommend starting the series with this book as it is tightly bound to the first. Start with “Borderline” if this series appeals.

The audiobook is once again excellent narrated by Arden Hammersmith. So glad I stumbled upon this series with “Borderline”. Well worth my Audible credits. Now I just need to wait until I get my next credit next month to listen to the third book.

The gloomy atmosphere of the first book made complete sense with the setting and characters. It took a while for me before I wanted to revisit the story but I'm glad that I did! This was a great follow up to Borderline. It's a solid story with interesting fables, personal histories and developments between characters. A whole lot happened and there is a more settled viewpoint that isn't all about dark and gloom.

I like the characters, a closer look into the Fae world and all of the action. Millie is finally fitting into her own skin and I'm really excited to see what will happen in the next book.

What made the experience of listening to Phantom Pains the most enjoyable?

I identified with the characters even though they in no way reflect who I am, which is something. I think the first person narration helps with that instead of hindering it. The character is so intensely self aware of her own problems and how she is broken that I wish that I could be that good at identifying my own crazy and how it impacts my life and my decisions. And for being an Urban Fantasy, and leaning on times and places I know well (So Cal) I still enjoyed the feel of the book, and it's narrative setting.

The book never really took the easy extra turn. People would throw out solutions to the problems being faced by the characters that would be fixed in most books. 'Oh we need to kill the fairy queen, but she can only be killed by a viable female, and whoever kills her takes her place' and a character offers to fall on that grenade... And then doesn't do it. I really enjoyed that. Almost everyone is actualized. This book actually explains the actions of the bad guy of the LAST BOOK and makes her back story more interesting. It is a fascinating piece of writing.

What does Arden Hammersmith bring to the story that you wouldn’t experience if you just read the book?

She voices the character so well. I've never heard anything else she's done, but for me she is Millie, in the same way that the Narrator who does A Distant Mirror is now the voice of Barbara Tuchman.

After ten thousand years the queen of evil is back, and she's pissed, and the only thing standing between her and the destruction of all human and fairy kind is a young amputee with Borderline Personality Disorder...

Where does Phantom Pains rank among all the audiobooks you’ve listened to so far?

The series as a whole is quickly becoming one of my favorites. The fresh take on the classic Urban Fantasy with a character that has depth and nuance is wonderful!

What other book might you compare Phantom Pains to and why?

The Dresden Files or the Russian Night Watch series for the urban fantasy elements. The psychological elements remind me a lot of The Stranger by Albert Camus

Spoilers? Honestly, the culmination / climax was the best scene for me. I love how the author has a talent for presenting an ending that is unexpected and a-typical. I was all prepared for a "final boss fight" and the author found a way to tell the story with out going this cliche'd route. It was brilliant.

I felt like I could really understand the emotions the character was going through which is a great credit to the author's wonderful ability to present the difficulties of Borderline Personality Disorder and the techniques used to address it. The story was definitely an emotional one which is hard to do in fantasy novels

Nothing but high praise. This series feels is a great entry into the genre but with its own unique spin. I will be recommending this to all my friends.