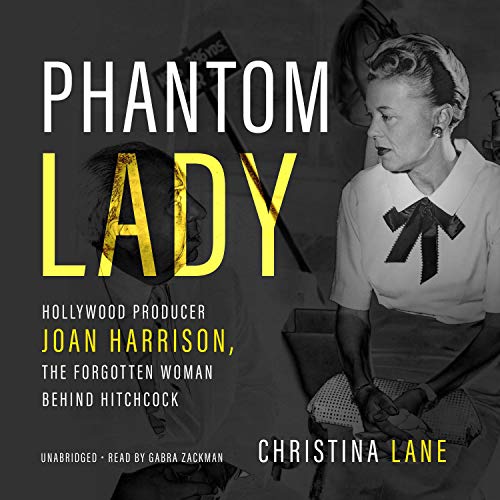 Phantom Lady chronicles the untold story of Hollywood’s most powerful female writer-producer of the 1940s. In 1933 Joan Harrison was a 26-year-old former salesgirl with a dream of escaping her stodgy London suburb and the dreadful prospect of settling down with one of the local boys. A few short years later, she was Alfred Hitchcock’s confidante and the Oscar-nominated screenwriter of his first American film, Rebecca. Harrison had quickly grown from being the worst secretary Hitchcock ever had to one of his closest collaborators, critically shaping his brand as the “master of suspense.”

Forging an image as “the female Hitchcock,” Harrison went on to produce numerous Hollywood features before becoming a television pioneer as the producer of Alfred Hitchcock Presents. A respected powerhouse, she acquired a singular reputation for running amazingly smooth productions - and defying anyone who posed an obstacle.

Author Christina Lane shows how this stylish, stunning woman, with an adventurous romantic life, became an unconventional but impressive auteur - one whom history has overlooked.

I think there was a chance, but not a great book.

I think with less rattling off of cast names and more behind the scenes tales and history, this could have been a better book. It is written like a teacher told you to focus less on story but be sure to include everybody involved. By the time that is done, it seems telling the story that brought up any given movie is forgotten. I did enjoy it (3 Stars being "Pretty Good"), but it was more data than behind the scenes excitement. Nothing against Joan Harrison. I think her story, if not watered down with data, is quite interesting and had more to it.