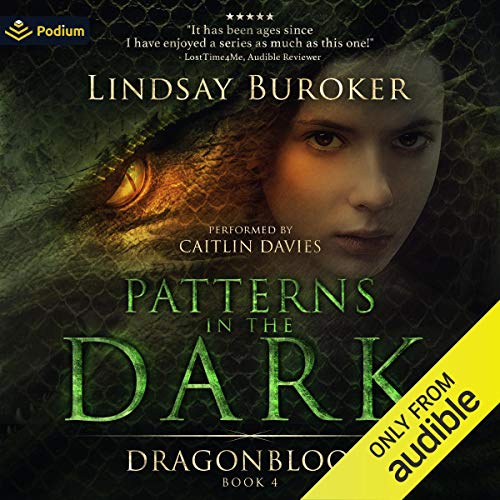 Patterns in the Dark

Everyone knows dragons have been extinct for over 1,000 years.

At least one dragon remains, and military scientists from the Cofah Empire are experimenting with its blood, using the magical substance to power deadly new weapons that could be used to bring the world to its knees. That's a concern for Zirkander, Cas, and the rest of the Iskandians, but all Tolemek wants is to find his missing sister. The last time he saw her, their father had locked her in an asylum because of a mental illness with no cure. Now the military has taken her. What use the Cofah have for her, Tolemek can only guess, but he is certain she is in danger. He must save her before it's too late. But her fate is inexplicably tied to the dragon's, and he must find it to find her.

Book 3 in this series left in a large cliffhanger, a plan and coarse of action to travel in order to save one of the main character's sister. I took a break on the series for a bit to catch up on some other series, but when I came back, I was instantly hooked once again. I love learning more about each character and their distinct personalities. The story was tense and full of action, with each character on the journey offering their own qualities to help further their quest. Great story, great tension, and great ending. I'm looking forward to the rest in the series.

Another great episode from Lindsay Buroker

I've enjoyed listening to another book in the Dragon Blood series. I own the rest of them on kindle but wish they were all available to listen to as well. The narrator, Caitlin Davies, does a fine job with differing the voices of the characters.

The series is a fantasy story arc with magic, dragons, airships and adventure. I'm looking forward to more of the character development as I move into the 5th book.

Fun. Original. And funny. A lot of books I have listened to recently seem to run together in my memory. This one won't. I'm anxiously waiting for another installment.

this story is a continuation of the first three books. It continues on so we find out what happens with the main characters from the previous three stories. It could also sets up the continuong storyline for the series. Great reading.

another great adventure in the chain of this series of book. the narrator brings the book to life, all of the authors thoughts flow together so flawlessly.

I thoroughly enjoyed and highly recommend Patterns in the Dark. The performance by Caitlin Dàvies is excellent, and the story is packed full of adventure, with great characters. If you want some first rate escapeism, I think you will really enjoy the entire Dragon blood series!

Love this series. Can't wait for book 5.
5 stars for the author and the narrator.

i loved it. it was great. i cant wait for the next one in the series.

Great listen I recomend it a must listen

all around good book. An amazing series i hope the outher books become avalible
soon.The narator made the story come alive.

wow what a great find. very happy to have found this series. all the books are fantastic. The performance was excellent!

I can't tell you just how much I enjoy this Series. It's funny, exciting, sad and overall well done! The characters come to live so easy in your mind and You'll fall in love with all of them over time! Just like me!

For all the people who love dragons and enjoy fiction.

Do NOT buy the audiobook. I thought it would be handy for in the car, but I will listen to something else in future and continue reading the series. THEN I will enjoy it. The woman reads it as if it is the most boring book in the world and the American ( Read: southern) accent is thicker than custard.

Buy the kindle version and read it: you will enjoy this if you are a fantasy fan.