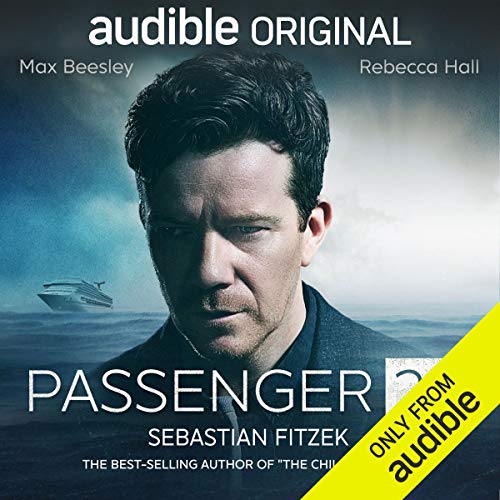 A gripping psychological thriller set on high seas. A transatlantic crossing that becomes a nightmare.

With no police to investigate and no escape, could it be the perfect setting for a crime? Martin Schwartz (Beesley) is an undercover detective who is recovering from his wife and sons' bizarre disappearance from a cruise ship 5 years ago. He is a desperate man willing to take big risks. Martin never wanted to step onto a cruise ship again until he receives a call which can't be ignored. On average, 23 people per year disappear without a trace from cruise ships. Never before has someone come back... until now.

Would you try another book from Sebastian Fitzek and/or the narrators?

I'm not sure. This was very unusual, to say the least.

No. There were too many sub-plots and people to keep track of

Remember years ago when we rented VHS movies from a store? And you got home, started watching the movie and realized someone put the wrong movie into the VHS jacket? That's what this reminded me of. For the first 45 minutes, I thought I had bought the wrong book because there wasn't anything about cruise ships in that part. I never fully warmed up to the story but kept listening out of morbid curiosity. And there was a lot of morbid stuff going on in this book. I didn't hate it, didn't love it, but there are a whole lot other books out there that I wish I'd spent my time and credits on. In a word, it was 'weird.'

a solid thriller if you don't think too hard

About 23 people disappear from the world’s cruise ships every year. Ship owners have a considerable interest in keeping these disappearances under wraps and tend to describe those that come to light as suicides, whether there is evidence of a suicide or not. That's the basis for Fitzek's latest thriller.

Five years ago, undercover detective Martin Schwartz lost his wife and son to such a disappearance on board a cruise ship. Now a shell of a man with nothing to loose, he agrees to meet a wacky elderly woman on board that same ship. She maintains there is something far more sinister going on as children and their mothers have gone missing regularly over the years. As Schwartz starts to look into this mystery, one of the missing children reappears on board the ship.

I've been an avid reader of Sebastian Fitzek's books for years, but this was my first experience of listening to the translated version of one of his books. While it kept my attention throughout, I don't feel that Passenger 23 was one of his best. It was suspenseful and did have the typical Fitzek twists and turns that are totally unpredictable, but it didn't mess with my head as much as some of his other psychological thrillers did.

The book (like most of his) should come with a warning. Fitzek likes to shock, and the gruesome details and disturbing themes will not appeal to everyone. Passenger 23 deals with the sexual abuse of children and is rather hard hitting in its description of physical acts of violence and sexual abuse.

There are intermittent sound effects throughout and music in between chapters. The sound effects were ok though I didn't really feel they added much to the story. The music IMHO was trashy. It reminded me of very old films where the music is supposed to create suspense.

Narration was very good. The voice artist narrating the story was a little too rigid and formal, but the narrators portraying the main characters brought life to the story.

Beware there is an epilogue that, oddly, is after the production credits, so don't miss it as it explains one part of the story from right at the beginning of the book.

Overall, a solid thriller if you don't think too hard about how realistic this plot is and are willing to believe the unbelievable for a few hours of dramatic listening.

Audiobook was provided for review the publisher.

Are you sure you want to book that cruise?

The best thing about this book is the premise: mysterious disappearances at sea, the lack of competent investigatory resources; the cruise ship owners' powerful motivations to cover up the situation.

Would you recommend Passenger 23 to your friends? Why or why not?

I wouldn't especially recommend this book, because the author goes into too much grisly detail (listeners' imaginations are always worse than whatever far-fetched torture methods writers come up with). Also, there's a huge plot hole (spoiler alert: all the mother-child victims "won" their cruises in an online contest they don't remember. The authorities wouldn't pick up on that? Even semi-competent ones??). Finally, we get into really unbelievable territory with the opening scene where a man's healthy leg is being amputated, the significance of which isn't explained until an epilog, which, BTW, comes after the credits, so many people are likely to miss.

The main narrator was a bit heavy for the content; the other actors were fine, but since they're only used for dialog and there wasn't much, their voices felt intrusive. And I didn't think the sound effects were more than distracting. They were OK when used for atmosphere, but not when relevant to the plot--footsteps, doors slamming, and the like. It's the difference between a sentence that reads (in a straight narration), “He ran up the stairs to the fifth deck and arrived panting. ‘Where is she?!’ he asked” versus “He ran up the stairs to the fifth deck. ‘(pant, pant, pant) Where is she?!’” A fast-moving thriller contains a surprising amount of panting and shrieking.

Do you think Passenger 23 needs a follow-up book? Why or why not?

There doesn't need to be a followup, because the main character has resolved his personal mystery, which was his principal motivation.

Thriller writers need to find other ways to engage readers than over-the-top gruesome violence (especially against women) that destroys credibility. That worked for a while, but now has become such a cliche of the genre that it's silly.

Despite being a decent thriller and performed by a phenomenal cast, the underlying "evil" in the primary story line is so despicable that I found it difficult to continue through. A slightly less horrific storyline would have been preferred by this reader.

Is was a chore to get through this Audiobook. I was surprised that Audible produced this audiobook is this condition. I've listened to about 400 audiobooks and this is one of the worst. The plot was ridiculously stupid and increasingly unbelievable as it progressed. I sounded like it was translated into English from German by Google Translate. The sound effects and "actors" were awful. There were long silences and weird music as lengthy segues between scenes. When ordering this audiobook, I thought the drama format would be good. Not at all, especially in this bad drama. I choose audiobooks because I can listen while doing other activities, like driving, mowing the grass and weed whacking. Impossible with this production. The narrator is loud but the actors and much quieter and can't be heard with the background noise and their stupid sound effects. A real waste of time.

What's with the effects

Would you try another book from Sebastian Fitzek and/or the narrators?

The plot was actually very good

Without the effects and myriad of narrators

I will try not to order any similarly narrated books

Terrible sound effects AND a terrible book.......time I will never get back. Would not reccomend.

OMG this is such a crazy ride, or should I say screwy as in screwdriver..
Suicide gone amok ?!
I love this Audible Original!!
Psychopathic serial killer stories have become my new obsession.
The story and the cast rocked!
So many twists and turns, I was almost late for work, every time I wanted to pause the story something crazy would happen and kept me glued to my seat. I listen in my car all the time and my surround sound kept sending me back to that cruise ship.

The story can be somewhat difficult to follow at times. It becomes much clearer in last 15 minutes.

This jumbled drama did not work for me

The only thing I enjoyed about this original drama was Robert Glenister. Nothing else worked for me, not the characters, the story, or the frantic feel. More of a jumbled mess than a mystery drama. Maybe the creators got bizarre confused with original or satisfying. I know the whole thing is barely 8 hours, but I just couldn't stay with it until the end.

Captivating till the very end

I'm so glad I took my mother-in-law's recommendation and bought this audiobook. It is a thrilling and captivating book. finished it in less than 24 hours because it was impossible to pause it. Although in the beginning the very dark and demented plot line was a bit distressing, it is one hundred percent worth pushing through.

You can't anticipate the ending at all, as the story constantly is turned and twisted

another great book from S.F.