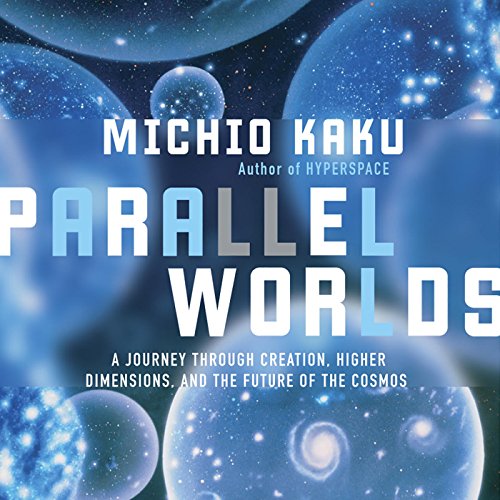 Is our universe dying?

Could there be other universes?

In Parallel Worlds, world-renowned physicist and best-selling author Michio Kaku - an author who "has a knack for bringing the most ethereal ideas down to earth" (Wall Street Journal) - takes listeners on a fascinating tour of cosmology, M-theory, and its implications for the fate of the universe.

In his first book of physics since Hyperspace, Michio Kaku begins by describing the extraordinary advances that have transformed cosmology over the last century and particularly over the last decade, forcing scientists around the world to rethink our understanding of the birth of the universe and its ultimate fate. In Dr. Kaku's eyes, we are living in a golden age of physics, as new discoveries from the WMAP and COBE satellites and the Hubble space telescope have given us unprecedented pictures of our universe in its infancy.

As astronomers wade through the avalanche of data from the WMAP satellite, a new cosmological picture is emerging. So far the leading theory about the birth of the universe is the "inflationary universe theory", a major refinement on the big bang theory. In this theory our universe may be but one in a multiverse, floating like a bubble in an infinite sea of bubble universes, with new universes being created all the time. A parallel universe may well hover a mere millimeter from our own.

The very idea of parallel universes and the string theory that can explain their existence was once viewed with suspicion by scientists, seen as the province of mystics, charlatans, and cranks. But today physicists overwhelmingly support string theory and its latest iteration, M-theory, as it is this one theory that, if proven correct, would reconcile the four forces of the universe simply and elegantly and answer the question "what happened before the big bang?"

Already, Kaku explains, the world's foremost physicists and astronomers are searching for ways to test the theory of the multiverse using highly sophisticated wave detectors, gravity lenses, satellites, and telescopes. The implications of M-theory are fascinating and endless. If parallel worlds do exist, Kaku speculates, in time - perhaps a trillion years or more from now, as appears likely - when our universe grows cold and dark in what scientists describe as a big freeze, advanced civilizations may well find a way to escape our universe in a kind of "interdimensional lifeboat".

An unforgettable journey into black holes and time machines, alternate universes, and multidimensional space, Parallel Worlds gives us a compelling portrait of the revolution sweeping the world of cosmology.

"In Parallel Worlds, Michio Kaku brings his formidable explanatory talents to bear on one of the strangest and most exciting possibilities to have emerged from modern physics: that our universe may be but one among many, perhaps infinitely many, arrayed in a vast cosmic network. With deft use of analogy and humor, Kaku patiently introduces the reader to variations on this theme of parallel universes, coming from quantum mechanics, cosmology, and most recently, M-theory. Read this book for a wonderful tour, with an expert guide, of a cosmos whose comprehension forces us to stretch to the very limits of imagination." (Brian Greene, Professor of Theoretical Particle Physics, Columbia University, and author of The Fabric of the Cosmos and The Elegant Universe)
"Those who might enjoy a tour of cosmology, time travel, string theory, and the universe in 10 or 11 dimensions will find no better guide than Michio Kaku, a rare individual who has undertaken research in these subject areas yet also knows well how to present this intriguing, complex material in an engaging and easily assimilable style." (Donald Goldsmith, author of The Runaway Universe and Connecting with the Cosmos)
"A highly readable and exhilarating romp through the frontiers of cosmology." (Martin Rees, author of Our Cosmic Habitat and Our Final Century)

the author covered a very wide horizon of cosmology with related subjects of quantum physics, relativity and other theories. he explains also the latest quantum theories like string theory, super symmetry and M theories that could be considered as the unified theories and their impact on cosmology. he also talks a lot about the future of humanity and the options that humanity would have to survive. very captivating.

I bought this book based on readers' comments and it fulfilled my needs to learn more. I thought the narrator did a fine job with a complex subject. I thought the first 3/4s of the book were at the right level and interesting but the last 1/4 of the book it seem to lose momentum on the subject and honestly I couldn't wait till it ended. Any time there were discussions on math, although it was probably fairly simple stuff, I found it hard to grasp without visually "seeing" it as I listened to the book in the car.

riveting. understandable. but not detailed

I loved this book. I haven't read very much physics since the 80's and wanted to catch up on what has been learned and developed in the realm of cosmology and physics , relativity and quantum theories. this provided a good review of those areas and recent ideas. enjoyable.

A nice history of the cosmos.

I enjoyed the history of Physics that Kaku brings to this story. The ways he ties in the metaphysical with what is scientifically proven weaves a compelling tale of the meaning of life in the universe.

One of my favorite science/physics books

This has been an absolute pleasure to listen to. It also has really good replay value, I already want to rewind back several chapters from the end re listen to the tail end of the book.

You would think the matter of this book would contain enthusiastic views on what's to come. Honestly, it provides a clear view of possibilities of what we may not considered to be options. GREAT Read and better also in audio.

A complete masterpiece of modern thoughts

This book was fascinating because not only did it clearly layout complicated scientific theories in a easy to understand why, it also left the sense of awe and wonder which so much of this genre of literature is devoid of. Although the author's opinion and views we're clear it was not opinionated. he laid out the different lines of thought and took them to their logical conclusion through each perspective. I would recommend anyone that is interested in physics for its own sake or one who is curious about the philosophical and Theological implications of the grand discoveries which it is made to read this book. If I could tell Michio Kaku thank you face to face for all of his great work I would.

What disappointed you about Parallel Worlds?

I was hoping for much more science. Instead there was plenty of philosophy and way too much religion.

Most Beautiful Exposition of the Cosmos

A balanced and thoughtful thesis on the universe with a proper and careful study of varying opinions and ideas. Michio comes across as honest well versed and balanced in his exposition. Truly marvelous. Such a beauty. To me it answered so many questions on theology and provided arguments that even the best modern religious scholars would struggle to think about. The mind is unconstrained by the dogmas and traditions that we found. Truly learning is better than inheriting.

Little bit over my head. Love Michio Kaku, but...

Would you consider the audio edition of Parallel Worlds to be better than the print version?

No idea. Probably in some ways, yes.

What could Michio Kaku have done to make this a more enjoyable book for you?

I loved the illustrations and examples he gave to relate the complicated concepts to everyday life. Would've liked more if possible. And to the layperson, I don't really care about ultra-specific details - but I understand he wanted to be thorough. It just made the book drag a little for me.

Which character – as performed by Marc Vietor – was your favorite?

No. Mind would have exploded.

I'd look for the abridged version if you're just a layperson like me who likes to watch documentaries on space and is intrigued about the possibility of time travel and parallel worlds -- but is not well steeped in the topic. I like physics but I, by no means, am an expert in math or physics. I have a very basic grasp of space, time, and physics. In all, this book was over my head and not extremely enjoyable. But Michio Kaku is amazing and I am by no means bashing him! This is a great book, especially for those of you who may have more knowledge than I do in this department!! Just beware, layperson, this may get a little tedious to listen to.