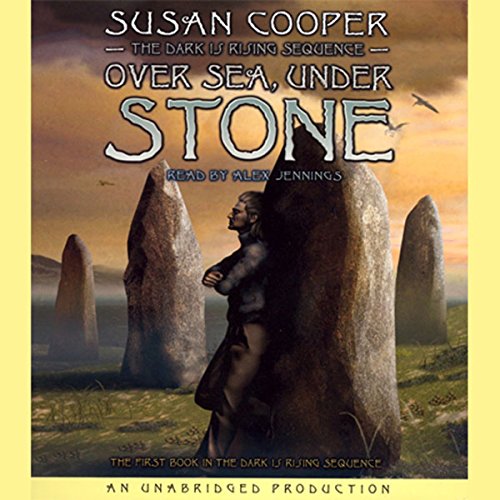 Over Sea, Under Stone

On holiday in Cornwall, the three children discover an ancient map in the attic of the house that they are staying in. They know immediately that it is special. It is even more than that - the key to finding a grail, a source of power to fight the forces of evil known as the Dark. And in searching for it themselves, the Drews put their lives in peril.

This is the first volume of Susan Cooper's brilliant and absorbing fantasy sequence know as The Dark Is Rising.

"Jennings' ability is outstanding as he slips in and out of the numerous voices with the rapid dialogue as it approaches the climax....This is an outstanding reading of a classic tale that all young listeners and adults will thoroughly enjoy." ( School Library Journal)

A short but excellent tale.

I actually started this series, although I didn't know it was such at the time, back in 1993 whenI was in Junior High, with the fourth volume. It wasn't until about ten years later that I got the proper skinny on it and read the series in proper order. Over Sea, Under Stone opens with the Drew family, Dick, Ellen and their three young children, arriving in Cornwall for a summer vacation, which they'll be spending with their Great Uncle Merry, a mysterious professor who often appears unexpectedly on the Drews' doorstep to vanish just as quickly in the night. While exploring the massive house that Uncle Merry, Meriman Lyon to the wider world, the three Drew children, Simon, Jane and Barney, discover an ancient manuscript which they believe to be a map showing the location of what they believe to be an ancient treasure. Though a game to the three Drews, the importance of the manuscript begins to surface, first when a mysterious man and a woman claiming to be his sister appear and ask the Drews about secret passages and maps, then even more so later when the house is burglarized while the Drews sleep. Realizing what the thieves must have been after, the childen show the manuscript, which they managed to keep safe, to Uncle Merry, who reveals that the treasure is in fact an ancient grail from the time of King Arthur. Thus begins a dangerous race as the Drews attempt to decipher the clues of the map and reach the grail before their myysterious enemies do. But it quickly becomes apparent that their foes, though relatively few in number, are extremely resourceful, and the outcome of the race is continually in doubt.
As usual with audiobooks, the narrator can sometimes ruin the experience even if the story itself is good. Fortunately that wasn't the case here. British actor Alex Jennings not only has a good voice for storytelling but also a talent for accents and dialects that lend personality to the characters he portrays, from the Cornish accents of the village locals to Uncle Merry's deep, commanding tones. This is definitely a listen I wuld recommend to others. It's not an entirely traditional fantasy with swords, dragons and wizards but it's a gripping tale all the same.

This is a solid adventure story; a good start to the series and much less surreal than the stories to follow. I found, revisiting this as an adult, that the 'voices' of the children seemed to be just a little off- they kept saying things in a way that were much older than the characters themselves were (but that could just be a culture difference I guess, as I'm American and not British). Also, the peril wasn't very believeable this time around. I do remember that when I first read the books at around 10 years old I was completely enthralled, but now the conflict seems fabricated with no real power. Still, I'd recommend it for the 6-11 crowd.

I had to stop reading this series

First, let me point out the caveat that as a 23 year old guy, I am far from this series' target audience. Still that barely excuses such a poor mishandling of storytelling as I have experienced here. It's hard for me to exactly pin down what has rubbed me so badly. Was it the reliance on poorly explained decision making, the lack of intrigue from a plot that prophesies itself, or the awakening to great "deus ex machina" powers without enough tribulation to make such empowering feel earned? Perhaps it was the simultaneous glossing over of the Arthurian legends the series leans so heavily on with vague 'figure it out for yourself' descriptions that require a pre-existing knowledge of the legends to understand what the writer is referring to. Knowledge that I might add, this series' target audience is unlikely to know.

This is seen more clearly in the later books in the series, but the whole narrative feels very shallow. It's like you're standing at the edge of a beach full of potential, but there is a chain in the way. You can only see the beach and imagine how great it would be to experience it. It is utterly disappointing, and failed to keep me invested in the story enough to reach the conclusion.

As far as the narrator goes, I have next to nothing I could even try to nitpick. He is very good at keeping each character's voice consistently distinct so you're never wondering who is speaking at any time, and his narration is spot on. The only oddity is that sometimes there is no pause between the end of a chapter and him reading out the heading of the next. It creates a jarring and sharp transition that takes your mind a moment to process. That all being said if you do want a story following the same lore and theme as The Dark is Rising, I would strongly recommend Henry H. Neff's "The Tapestry" over this series.

Great book for all ages. Fast paced and likable characters - in the vein of Lemony Snicket meets Hardy Boys with a dash of Narnia.

Would you listen to Over Sea, Under Stone again? Why?

I like reading light hearted books so I loved this one. I liked the twists and turns even if they were not complecated.

The voices and personalities were very nice with acents and all.

The fight between good and evil is always a good plot.

Just remember it's a classic and for kids

It was an easy read as I read it over a weekend as part of a readathon.
Not quite sure how to fairly review this. It's written as a kids books so the plot is simple. Group of kids in a new place track down a mystery in classic good vs. evil. Was its 40th anniversary so the tropes and cliche's probably weren't back then. At first I wasn't sure if I was reading a Narnia book by mistake.
The pacing had a good flow keeping me interested. I like the main kids interaction and thought it was authentic. Overall a good start to a series and a classic to declare I have rea

Where does Over Sea, Under Stone rank among all the audiobooks you’ve listened to so far?

The book is a simple good vs evil story, set in a more innocent time
Lovely child's story
But...
The suspense nearly killed me and I couldn't stop listening til the very end!!!

Rufus the dog
Maybe Gummery too

Have you listened to any of Alex Jennings’s other performances before? How does this one compare?

Over Sea, Under Stone

I bought this for my 10 year old grandson and I am not sure which of us enjoyed it more! It is a nicely paced story which held our interest. Some great twists and also connections with history.

Fun adventure for kids of all ages

Fun Adventure for four kids. whose parents are clueless and absent. but whatever, it works.

This was an enjoyable tale, told with attention to characters and plot, and the performance was terrific. This was directed toward a pre-adult audience, with detail and plot turns enough for grownups to enjoy. The descriptions of the people and settings were first-rate. There were enough welk-told action scenes to move the plot along. I recommend this for anyone.