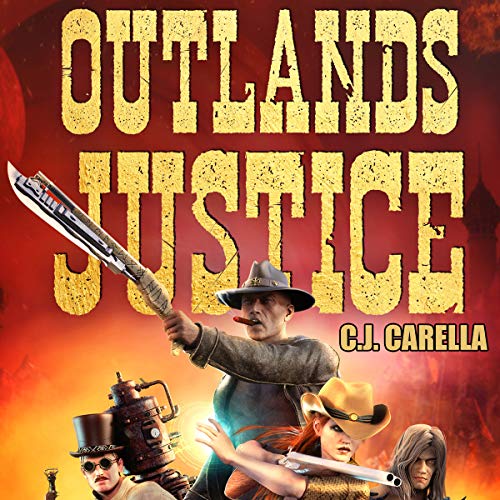 “There’s a man that needs killing.”

Nathaniel Lot: Survivor from a shattered Earth. Wielder of a powerful - and terrible - weapon. Once a hero, now an aging mercenary, drinking his life away. But when the daughter of two old friends asks for his help to destroy a murderous wizard and warlord, he can’t say no. The path of vengeance will take them through the Outlands, where they will face dangers both mundane and supernatural.

Kathryn Herrera: She grew up hearing tales of her parents’ heroic deeds, but she never expected a dark sorcerer to destroy her life. Now she only lives for revenge, and will stop at nothing to destroy the man known as the Warlock.

A Gathering of Heroes

They once were Justiciars, defenders of a great realm, each gifted with unique abilities. An immortal from fabled Atlantis; a master of arcane sciences; a warrior princess with a taste for death; a Greek demigod; and a Fey sorceress. They will ride forth once more and challenge the Warlock and his army of beast-men and demons.

A place where castaways from a thousand worlds struggle to survive. A land where magic and technology fight for supremacy - or meld together with strange results. A fractured realm where kingdoms and empires rise and fall, and outlaws and monsters prowl in the wilderness.

Outlands Justice is the first novel of a new series by C.J. Carella, author of the best-selling Warp Marine Corps saga.

Down the RABBIT HOLE for a little Surprise

This novel opens with a girl coming up to a man in a bar and saying, “There’s a man that needs killing.” Oh gak thought I, a Western? And That Western?? Wait, I wanted Sci-Fi/Fantasy! Luckily for me that’s what I got. This novel is a wonderful SURPRISE a fresh mix of fantasy, Sci-Fi, a dash of steampunk, a pinch of prep-per, Demi-Gods, Warlock Warlords, a few lizard people and a tiny bit of Western (but not in the way you think) all of which will make you happy you spent a credit on the first really novel novel I have had the pleasure of reading in quite some time. It’s not something you’re going to need a thesaurus to help you get through, but it’s a great adventure and I can guarantee it will entertain you enough that you may stay up late-or all night-just to see how it ends.
I bought this because I had read this author’s Warp Marine series (which is a huge cut above many of the space+military-or-ship+nasty alien books out there imho) and another book by him that’s more horror than anything else. I like an author who is versatile and doesn’t rewrite or reissue the same thing over and over. In fact, I am REALLY tired of seeing the same books being “re-released” for the tenth time in 20 years!!!