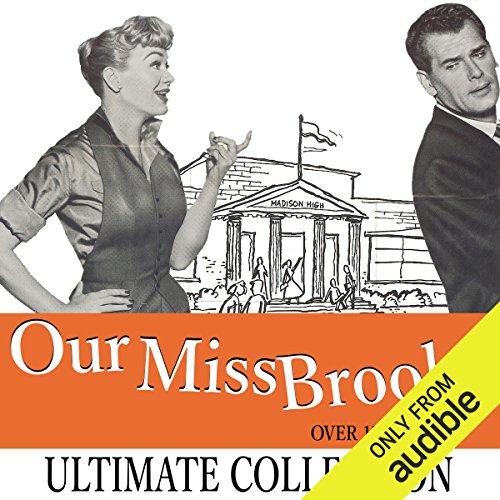 Our Miss Brooks: The Ultimate Collection - Over 180 Shows

Our Miss Brooks: The Ultimate Collection - Over 180 Shows

Our Miss Brooks was a hit on radio from the outset; within eight months of its launch as a regular series, the show landed several honors, including four for Eve Arden, who won polls in four individual publications of the time. Arden had actually been the third choice to play the title role. Harry Ackerman, at the time CBS's West Coast director of programming, wanted Shirley Booth for the part, but as he told historian Gerald Nachman many years later, he realized Booth was too focused on the underpaid downside of public school teaching at the time to have fun with the role. Lucille Ball was believed to be the next choice, but she was already committed to My Favorite Husband and didn't audition.

Arden won a radio listeners' poll by Radio Mirror magazine as the top ranking comedienne of 1948-1949, receiving her award at the end of an Our Miss Brooks broadcast that March. "I'm certainly going to try in the coming months to merit the honor you've bestowed upon me, because I understand that if I win this [award] two years in a row, I get to keep Mr. Boynton," she joked. But she was also a hit with the critics; a winter 1949 poll of newspaper and magazine radio editors taken by Motion Picture Daily named her the year's best radio comedienne.

For its entire radio life, the show was sponsored by Colgate-Palmolive-Peet, promoting Palmolive soap, Lustre Creme shampoo, and Toni hair care products. The radio series continued until 1957, a year after its television life ended.

Laughter is such a great thing!

Wow. First, when I say I’m listening to old radio broadcasts I heard as a child, I’m clearly dating myself! 😀 “Our Miss Brooks” (along with several other oldies but goodies, like George Burns and Gracie Allen, Lucille Ball, etc) just take me back to childhood, as I recall listening to these on the radio (and later, in the 1950’s, watching them as they transformed to tv). I was young then, but still enjoyed them.They are even better now, with some wonderful laugh-out-loud moments.

But this is caveat emptor for sure. Buyer: beware that this particular series has very poor audio quality. I have loved listening to them, laughed a lot! However, even though the audio improves with each year of the series, it is still not great. Worth the listen (to me) but I can only recommend the content, not the performance. But if you might be in the vicinity of my age, you’ll perhaps find it worth your while to struggle through the poor audio, to get to hear old jokes that are funny without offending, characters that touch your heart and memory-strings, and just hours of simple, clean fun. I’ve loved this. But admittedly, it has been challenging to hear it. (Audible: can you feel d a way to improve the quality? Maybe this is the best that can be done with really old tapes). I loved this. Someone else might—or might not—feel it worth the effort to hear them.

Great Comedy that Stands the Test of Time!

"Our Miss Brooks: The Ultimate Collection" is a wonderful find. Still laugh-out-loud funny, Eve Arden, Gale Gordon, and the rest of the crew bring life to the inspired comedy writing. Much of the first section is marred, unfortunately, by uneven sound quality and repetitious versions of the episodes. Past that, however, there is plenty of material to keep you laughing through the dullest commute. Highly recommended!

I Love old radio programs…Not this!!

Old radio programs are a peek into the past. Imagine your mother just waiting for her favorite show to come on. I was very excited to find this. While Eve Arden is a part of the show it’s fun. The trouble is she leaves the show early on and another actress takes her place. At that point the entire show goes downhill. Sadly I couldn’t finish this. It was a waste of one good credit.