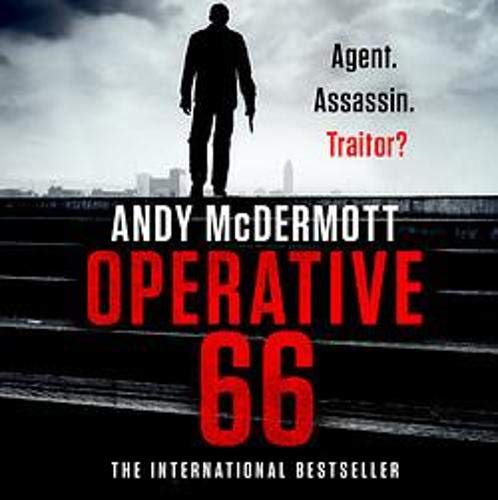 One of the UK's deadliest weapons, he is part of the mysterious C6 - an elite and top-secret security service with a remit to neutralise the country's most dangerous enemies.

But now Reeve is in the firing line. Framed as a traitor, Reeve is forced to flee as every operative is instructed to kill the 'rogue asset'. On the run from his own government, alone and under the radar, Reeve must survive off grid with fearsome assassins on his trail.

He doesn't know why he's a target. Or who betrayed him. But if one man has the skills necessary to uncover the truth...it is Operative 66.

This is, at present at least, a stand alone novel. I'm okay with that as it has a beginning, middle, and an ending. It does leave a couple key story threads dangling on the chance that the author might want to revisit this world. Do they NEED to be resolved? Maybe, maybe not. I'm okay either way. The story works well by itself or as the start of a series.

This novel is much closer to the author's previous effort, The Persona Protocol than to the Eddie Chase/Nina Wilde books. Those tend to be, despite the violence, much more light hearted. This book on the other hand is straight up action. In fact, you are about a quarter of the way through the story before you can take a breath and the protagonist asks himself, "What is going on and does everyone want to kill me".

Expect considerable mayhem on an Andy McDermott scale. ( Okay, not destroying whole cities or national landmarks, but big on a more realistic scale).

I enjoyed this book and had trouble putting it down. Highly recommended to action adventure fans.

Not Much of a Story

I would call this a collection of events rather than a story. This is supposed to be a spy novel but the spy is basically a fighter without mind or plan. I did enjoy the first few chapters and I finished the book (although skipping parts of pure predictable boredom.) more out of disbelief than wanting to finish. Hence the 2 stars. Not recommended.

This starts out with plenty of action and firepower and narrow escapes and car chases and highly unlikely motivation, and rapidly descends into bathos, or whatever the word is for a knight-errant fantasy wish fulfillment tale is. Wherever our intrepid hero goes, the weak are being molested by the venal yet strong, and he manages to rescue numerous damsels in distress daily, sometimes before breakfast. Yt he remains humble, while hinting of a bad upbringing that he's now dedicated to ensuring doesn't happen to anyone else, at least not without intervention by some strong, silent type. He is of course adopted by one of the aforementioned damsels . . .

In short, this goes from the silly to the inane to the just plain stupid fairly quickly. If you're looking for Jack Reacher, he took the last train elsewhere . . .

Andy McDermott does it again!

I have not read/heard a novel by this author that I haven't loved. Excellent story, really sucks you in, gets super intense...a great talent for making you really love the protagonist (s) and keeps you on the edge of your seat. Narrator was excellent as well. My only complaint is that I've finished all of McDermott's novels and now I have to wait for whatever he comes out with next!

Poor knockoff of the poor Bourne Identity movie. Skip this one for something hopefully better.