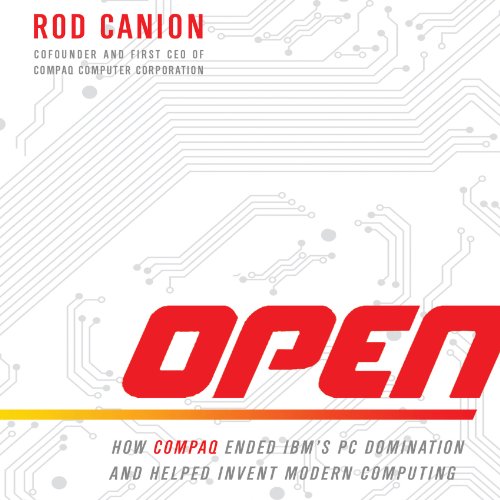 The story of Compaq is well-known: Three ex-Texas Instruments managers founded Compaq with modest venture funding. Just four years later, Compaq was on the Fortune 500 list, and, two years after that, they had exceeded $1 billion in annual revenue. No company had ever achieved these milestones so rapidly.

But few know the story behind the story. In 1982, when Compaq was founded, there was no software standardization, so every brand of personal computer required its own unique application software. Just eight years later, compatibility with the open PC standard had become ubiquitous, and it has continued to be for over two decades.

This didn’t happen by accident. Cofounder and then CEO Rod Canion and his team made a series of risky and daring decisions - often facing criticism and incredulity - that allowed the open PC standard marketplace to thrive and the incredible benefits of open computing to be realized.

A never-before-published insider account of Compaq’s extraordinary strategies and decisions, Open provides valuable lessons in leadership in times of crisis, management decision-making under the pressure of extraordinary growth, and the power of a unique, pervasive culture.

Open tells the incredible story of Compaq’s meteoric rise from humble beginnings to become the PC industry leader in just over a decade. Along the way, Compaq helped change the face of computing while establishing the foundation for today’s world of tablets and smart phones.

Wrong narrator for this book

Absolutely. But probably only of interest to those people who lived through the early years of the PC market, when companies like Compaq were trying to compete with IBM.

What was one of the most memorable moments of Open?

I was always interested in Compaq's decision to move ahead with the 386 before IBM. Canion seems to believe that IBM's hesitation to lead with this chip was due to its concentration on MicroChannel. I worked with marketers from IBM at that time, and they told me the reason was to protect the System/36. They believed that the power and memory management of the 386 would tempt many customers to buy a cheap PC instead of a more costly mini for many applications. Also, IBM had a RISC System 6000 in the works to compete with SPARC and a 386 announcement would have muddied the waters. Their opinion.

Would you be willing to try another one of Paul Boehmer’s performances?

Sure, but not for a technical book. I don't know how old he is, but everyone at that time pronounced the IBM PS/2 Pee-Ess-Too, not Pee-Ess-Slash-Too. Say it once or twice and it's merely annoying. But fifty or sixty times and it is truly irritating. Also, the new bus that Compq developed (EISA) was universally pronounced ee sa, not eye-sa. A very quick check on the Internet would have resolved this in a matter of seconds. This is probably the fault of the editor or producer, but the narrator gets the blame. He seemed to have no feel for the material. I can't blame him entirely if the material is not of interest to him. The whole production just seemed sloppy.

Do you think Open needs a follow-up book? Why or why not?

No, This is basically a CEO congratulating himself for making good decisions. The somnolent narration makes this book sound like a boring guy who lived through interesting times. No question Canion was the right guy at the right time to lead Compaq through a number of critical decision points that could have endangered the whole company. But maybe the story would have been more interestingly told by a third party with a less rosy view of Canion's performance. This particular narrative makes Canion the hero at every turn, The crowds cheer, the gutless competitors flounder. If there is a follow-up, it should be written by someone else.

Despite its flaws, this is a fascinating book for anyone who was involved in the early days of what has come to be known as the clone wars. It is wonderfully nostalgic for those of us who drooled over the idea of a 10 megabyte hard disk. It made me go and take a look at copies of PC Magazine and PC World that I saved from that era. They were exciting times and Rod Canion was right in the thick of it. I'm glad that he decided to write down his recollection of that time. But it may take another authjor with access to more people to fill out the history that "Open" is trying to tell.

A bit of Nostalgia

Enjoyed going back and hearing the story. Remember those times well, particularly how IBM compatible was such a big deal and that it could be a roll of the dice when it came to non-IBM PCs.

Excellent business story and very eye opening on the great impact that this company had in today's computing and communications.

Beeps when playing back in chapter five. Makes it unlistenable. The story itself is interesting and recommend the book not the Audible book.

Overall the book is exactly what the description says it is, it's the beginnings of Compaq, which is a pretty interesting story. The only downside is how short the book is considering the history it's covering, it really doesn't go into any depth on anything and moves along, in opinion, way too quickly. This book easily could have been 2-3x longer and I think it would have held the audience, but then again perhaps too much time had gone by by the time it was written and too much detail was lost by the author. I'd hope before everyone involved with this is gone that you'd have someone come in and write the history of Compaq from a few different angles just to have that additional detail, because, again, the story is really interesting and really important from a tech standpoint. Overall I'd give this book 4/5. The reader does a good professional job.

Reads more like cliff notes of a larger book by a super fanboy where Compaq is portrayed a hero with no flaws who handily dominates everyone. At the end, he even seems to portray Compaq as a big reason for Apple's success.

Learned a lot about the pc industry and the role Compaq played. Very informative with steady interest-keeping pace

The PC revolution was more than Apple and Microsof

Compaq at the end was not a favorable company but at its conception Compaq was simply amazing.

The audio editing of this book is lacking even used wrong words, repeated parts of sentences and cut off before a sentence was finished. The edit and narration completely changed a little more than half way through to a near perfect version. Not sure what happened.

The narrator was not a good fit for this book.

Berry interesting book ruined by bad robotic like narrator. I'll probably bay this book to read on my Kindle.

What a great story. My only real complaint is the robotic nature of the narrator. Not terrible, but definitely noticeable.