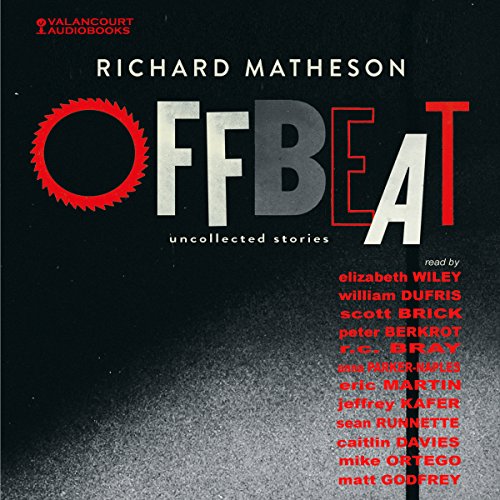 In the aptly titled Offbeat, Richard Matheson, a modern master of strange fiction, offers 13 excursions into the unsettling and bizarre. In these stories you will encounter a major league pitcher with a horrific secret for his astonishing success; an ordinary man who wakes to find himself in a silent, empty world; a death row prisoner with an extraordinary explanation for his innocence; and a novelist whose fictional creations transcend the printed page.

Originally published as a limited edition hardcover, now long out of print, the remarkable and rare tales offered in Offbeat display the brilliant imagination that gave birth to such classics as I Am Legend and Hell House.

"Perhaps no author living is as responsible for chilling a generation with tantalizing nightmare visions." ( The New York Times)
"The author who influenced me the most as a writer was Richard Matheson." (Stephen King)
"Matheson is one of the great names in American terror fiction." ( The Philadelphia Inquirer)

I confess that short story collections like Richard Matheson's Offbeat are my literary guilty pleasure. Individually, each of the selections has been elegantly constructed and presented by a truly gifted writer. As a whole, it's a lovely mixed bag of little meaty morsels that I was disappointed to reach the end of. Most stories feature some degree of a suspenseful sci-fi bent and, at times, a dark and twisty conclusion. I'm a fan of apocalyptic/dystopian and select fantasy/horror genres, so Offbeat is more than just "my cup of tea", it's darn near perfection.

As an audiobook, Offbeat comes packed with top-notch narrators, some being familiar to me from other projects, like Eric Martin, R. C. Bray and Peter Berkrot. I highly recommend the audiobook because these folks quite superbly capture and amplify the written talent with their many voice talents. Seriously, don't miss this one.

(I was provided a free copy of this audiobook in exchange for my unbiased review. Many thanks to R. C. Bray for this opportunity!)

Mostly great stories read very well by their performers, some of whom are amongst my favorite narrators. I personally think more than a few of the stories were outstanding.
I enjoy most of Matheson's work, this book included.

I love story collections. This one was really different. Some were awesome, and a few OFFputting, but all of them created a great selection. Definitely ODD but palatable stories. I have listened to this book a few times.

Struggled to get through first 3 stories then gave up! Maybe the best ones were saved for last?

Excellent! Something for everyone's tastes.

I loved these stories. These shorts have perfect narration. Reminiscent of Twilight Zone tales. Great!!!

Offbeat: Do you know me?

What made the experience of listening to Offbeat the most enjoyable?

The short stories diversity. If you are a fan, the name Richard Matheson needs no introduction. The "Nightmare at 20,000 Feet" episode on the old The Twilight Zone show and a dozen others. "Somewhere in Time" movie starring Christopher Reeve and Jane Seymour, his story "I Am Legend" which was the movie "Omega Man" in the 1970's and most recently "I Am Legend"with Will Smith. And on and on. Sadly, these are lesser works.

The voice acting was fantastic across the board! The stories were open ended and some just ... odd. Not that odd is bad, but some just didn't work for me anyway.

They were all very good to excellent. The stories had yelling and quiet parts that were handled well. But that may have been the downfall of the Audible edition. This may actually have worked better as a written work.

It wasn't bad but parts of it just weren't that entertaining to me. And I am a Richard Matheson fan.

And despite my criticisms, I do much appreciate the chance to have reviewed Offbeat.

This review copy audiobook was provided by the author, narrator or publisher at no cost. Which I can only assume was voluntary on their part. I am happy to give my honest review of it. I think I'm suppose to mention how reviewing this was voluntary on my part too.

Maybe it's just me, but after reading a couple of his other full length novels, and very much looking forward to an anthology of his stories, I was highly disappointed. Not only did they fail to hold my attention it seemed a majority of them lacked any sort of closure. It was almost as if I was reading a bunch of teasers for up-coming releases. Just not my cup of tea, I guess. Narrations were pretty decent, though, so that's one positive.

The stories are a little dated, with some of the premises coming off wildly difficult to identify with ("And In Sadness" in particular). Overall very Twilight-Zoney.

These stories were not his best work by far. Very disappointing for a great author.