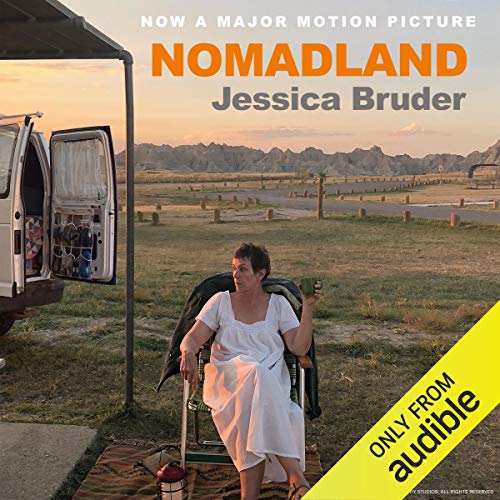 From the beetroot fields of North Dakota to the campgrounds of California to Amazon's CamperForce program in Texas, employers have discovered a new, low-cost labour pool, made up largely of transient older adults. These invisible casualties of the Great Recession have taken to the road by the tens of thousands in RVs and modified vans, forming a growing community of nomads.

Nomadland tells a revelatory tale of the dark underbelly of the American economy - one which foreshadows the precarious future that may await many more of us. At the same time, it celebrates the exceptional resilience and creativity of people who have given up ordinary rootedness to survive, but have not given up hope.

At first, I thought the file was corrupted because of the computer generated voice of the narration. I deleted it and re downloaded, that is how bad it is.

Now after re-downloading, I am almost certain that this file has been run through some sort of modulation software, and it makes the narration sound like terrible computer generated Siri GPS directions.

I have checked the hyperlinks to the narrator Karen Whatever Her Name Is, and her voice does not sound like this at all on any of the samples of.the other titles she's read. Infact, no human being has a natural voice like this. it absolutely must be an intentional modulation by the sound engineers.

If you're wondering how bad the audio is, you won't get the full grasp of it until after you purchase and then try to grind your teeth through the grating intonations (lack thereof".

Infact, it is almost worth buying the book just to be able to leave this review so the sound engineers can be sent some feedback.


Re-record the book, audible. this is an unsellable product.

I really loved this book. Compared to the decidedly pointless and non-informative movie it was a gem of personal storytelling and a glimpse into, an otherwise invisible, social strata.

The narration however was really mediocre. At points so flat that it was hard to follow.

this is why journalists shouldn't write books. their biased view on life is appalling and this one is top missing intelligence also a bigot. on top of very poor journalism the writing is extremely poor long passages of repeating or circling around the same line of words. And if that wasn't enough the narration was done by a horrible voice that sounded autotuned or just plain bad, maybe even faulty or low quality equipment.

I did watch the movie, which is much better and not opinionated.

I will trade this book in.

Story everyone should read

Pararel world to ours, in which we live and we can afford paying rent, utilities, insurance and... a lot of other things.