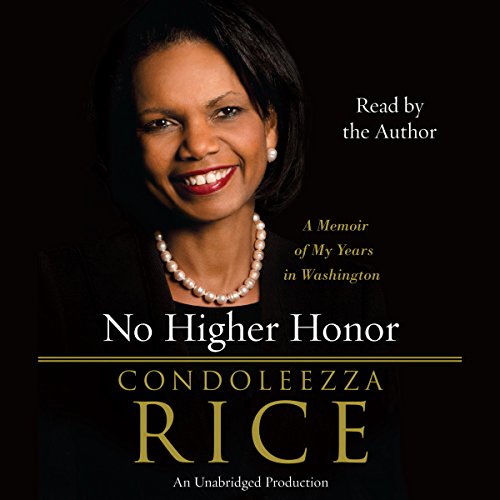 From one of the world’s most admired women, this is former National Security Advisor and Secretary of State Condoleezza Rice’s compelling story of eight years serving at the highest levels of government. In her position as America’s chief diplomat, Rice traveled almost continuously around the globe, seeking common ground among sometimes bitter enemies, forging agreement on divisive issues, and compiling a remarkable record of achievement.

A native of Birmingham, Alabama who overcame the racism of the Civil Rights era to become a brilliant academic and expert on foreign affairs, Rice distinguished herself as an advisor to George W. Bush during the 2000 presidential campaign. Once Bush was elected, she served as his chief adviser on national-security issues – a job whose duties included harmonizing the relationship between the Secretaries of State and Defense. It was a role that deepened her bond with the President and ultimately made her one of his closest confidantes.

With the September 11, 2001, terrorist attacks, Rice found herself at the center of the Administration’s intense efforts to keep America safe. Here, Rice describes the events of that harrowing day – and the tumultuous days after. No day was ever the same. Additionally, Rice also reveals new details of the debates that led to the war in Afghanistan and then Iraq.

The eyes of the nation were once again focused on Rice in 2004 when she appeared before the 9-11 Commission to answer tough questions regarding the country’s preparedness for – and immediate response to – the 9-11 attacks. Her responses, it was generally conceded, would shape the nation’s perception of the Administration’s competence during the crisis. Rice conveys just how pressure-filled that appearance was and her surprised gratitude when, in succeeding days, she was broadly saluted for her grace and forthrightness.

From that point forward, Rice was aggressively sought after by the media and regarded by some as the Administration’s most effective champion.

I have been a fan of Dr. Condoleezza Rice for some time and have read the Antonia Felix and Mary Dodson Wade books. No Higher Honor is the story of her work as chief advisor to the President and Secretary of State. The book is filled with tidbits and stories that readers will find entertaining and informative. I read Extraordinary, Ordinary People Rice’s story of her formative years immediately before tackling this volume. This was a good idea because it helped me to better understand how she made decisions in the course of her official duties. Now that said, readers must approach this book as a memoir. As such, this is Dr. Rice’s opportunity to tell her story from her point of view. True evaluation of her work will only come much later after many of the players are dead for that matter. Further, Dr. Rice is an academic with wide government experience and not a literary figure, per se. The prose reads similarly. It is clear, concise, and to the point. It is not great literature and that is not its intent. This volume is long as well and chronologically organized. Therefore, it reads like a day-by-day account of what she faced and how she dealt with the circumstances presented. Nonetheless, there is much here to stimulate the thinking of those in her corner and those who are not sympathetic. Those approaching this books for what it is will be well rewarded for the time spent. The reading of Dr. Rice is a plus!

The stories are ones that I did not hear before and some shocked me, like the poison scare. Other stories you get to see from another point of view. While I don't always agree about decisions that were made, this book helps to understand a little of the dynamics of 'how' they were made, especially in times of stress.

The best auto-biographies are also read by the author. You can hear her tone of voice when she recollects these moments and that is an additional insight into her thoughts.

George W. Bush, Don Rumsfeld, and Dick Cheney have already published very good books about their service in the Bush Administration. Yet this book is in my opinion the best of the group. Why is that? I think there are three reasons. First, Condi???s book focuses almost exclusively on her service during the. Bush 43 Presidency. That allows her to provide more detail than did the others, who include considerable material about their prior government service. Second, Condi is a former college professor in the field of foreign relations and a very good one. She appears to have wanted to include clear teaching points for her readers. In any case, her account provides richer background and context to particular episodes and issues. The book (or excerpts from it) should become an invaluable resource for college and post-graduate courses on international relations and political science. Third, Condi shares more openly her own joys, mistakes, concerns, and fears as she went about her work. This is perhaps because she was newer to high-level government service, making it a fresher experience for her. It may also reflect the fact she is not a professional politician and is perhaps less concerned about image and her popular persona.

There are a number of vignettes in the book that reflect Condi???s unique background as a native of Birmingham, Alabama and the first black woman to serve as Secretary of State. For example, who else would have described to the President the deteriorating scene in Iraq in 2006 as the ???Iraqis having a Bull Connor problem??????i.e., comparing the reports of Iraqi police forces joining with outlaw Shiite militias to the disgraceful record in 1963 of the Birmingham Police Commissioner directing brutal police actions against peaceful demonstrators seeking an end to racial segregation?

All in all, an excellent book that will provide many insights and useful information for anyone interested in the major international and security issues of our day.

Where does No Higher Honor rank among all the audiobooks you’ve listened to so far?

It is one of my favorite books so far.

What was one of the most memorable moments of No Higher Honor?

More of a memorable tug of war between Don Rumsfeld/Dick Cheney and Condoleezza Rice.Though "thousand of tactical mistakes..." was pretty humorous.

Have you listened to any of Condoleezza Rice’s other performances before? How does this one compare?

Read Secretary Rice's book, General McChrystal's book, and Chris Kyle's book to get a perspective on the Iraq War from very different viewpoints.

i really enjoyed her account of the tremendous behind the scenes work that went into the hot cauldron of US foreign policy during the 8yrs of the GWB term. Very insightful, particularly given her even handed and clear retelling of the chain of events that started even before 9/11 and through the isreali/hezbollah conflict and even into the Arab spring. gained a much better understanding of the mindset that lead us into the iraq quagmire. i really learned alot about US foreign policy and enjoyed the human touch that she added to what could have been a dense topic.

Would you listen to No Higher Honor again? Why?

No, that's not my style, except for Steve Jobs, which I did listen too twice. Ms. Rice's book was one of the best books I have ever listened too or read.

What other book might you compare No Higher Honor to and why?

As of this moment, there is no comparision, but I am waiting on a book written by Colin Powell that covers his time as Sec. of State.

What does Condoleezza Rice bring to the story that you wouldn’t experience if you just read the book?

I was happy to hear her voice and the inflection that she placed on some of the personal moments. You cannot get that from reading. I have a new found respect for her, because I am a black man and a democrat. She also made Pres. Bush almost sound presidential.

It would have been nice if I had that kind of time. I did take some long drives while listening and enjoyed every moment. I was sorry that the story ended.

I have a new hero (Shero). Every time I see her from now on, I will be much more respectful.

Best political book I have read

Simply incredible. What an amazing woman. If you want the real story of the Bush years, THIS is the best source.

I have read several biographies about Condoleezza Rice, now I shall obtain the information from her via this memoir. Rice always appears gracious, well poised, intelligent and well dressed. The other books I read provided a good deal of information about her childhood and education. I am most interested in learning about her time as national security advisor and Secretary of State. The book is long at 750 pages. I read these types of books to obtain knowledge therefore I keep an open mind while reading.

The book appears to be a comprehensive look at the foreign policy strategy of the Bush administration. Rice defends many key decisions; she also acknowledges the mistakes and missteps made along the way. Rice admits that the administration mishandled concerns about the Kyoto climate change treaty and failed to respond positively, after the September 11 attacks, to NATO’s invocation of the “article five” that it was considered an attack on all NATO states.

Rice reveals that the well-publicized dispute with Cheney and Rumsfeld were not personal but simply business-- policy differences. Cheney and Rumsfeld lambasted Rice in their books. She is more polite than they were insisting the difference were about policy not personality. As secretary of State she points out the nuclear pact with India and the disarming of Qaddafi, to the passionate commitment to Africa: programs to fight AIDS, development of grants, and pressure to reduce killings in Darfur. Rice did not reveal much about her personal life but I did notice two things that were important to her, prayer and exercise.

The book is written in a matter of fact style of the Academic, which of course, she is, as her professorship at Sanford University indicates. She writes as if she is an ordinary person talking to you over tea. She writes with clarity. One thing I learned from the book is what the National Security Advisor does. I compliment her on the following: that she respected other person opinions and she gave credit to her deputies and assistants, which is rare to see in memoirs these days. Rice narrated the book. I can recommend this book to anyone interested in history or political science.

I would highly recommend this book to a friend! Many friends, and already have! It's a wonderful account of the service this patriot has given to her country and what an insightful leader she is. She's got the creds. Let's hope she's asked to serve again in the next administration. We're gonna need honorable folks like Ms. Rice to straighten out the mess we're currently in!! This book proves that she is a solid human being. Worthy of a higher office!

Would you consider the audio edition of No Higher Honor to be better than the print version?

I specifically chose this book based upon the fact the author read it.

The insight provided by Secretary Rice about her time in Washington was incredibly informative, however like her experience in the city was very different for each term, the book has 2 very distinct flavors. At times, I felt Ms. Rice was overly eplanatory of details and situations that could have reduced the length. I will definitely read this book again, but I may skip a few parts the 2nd time around.